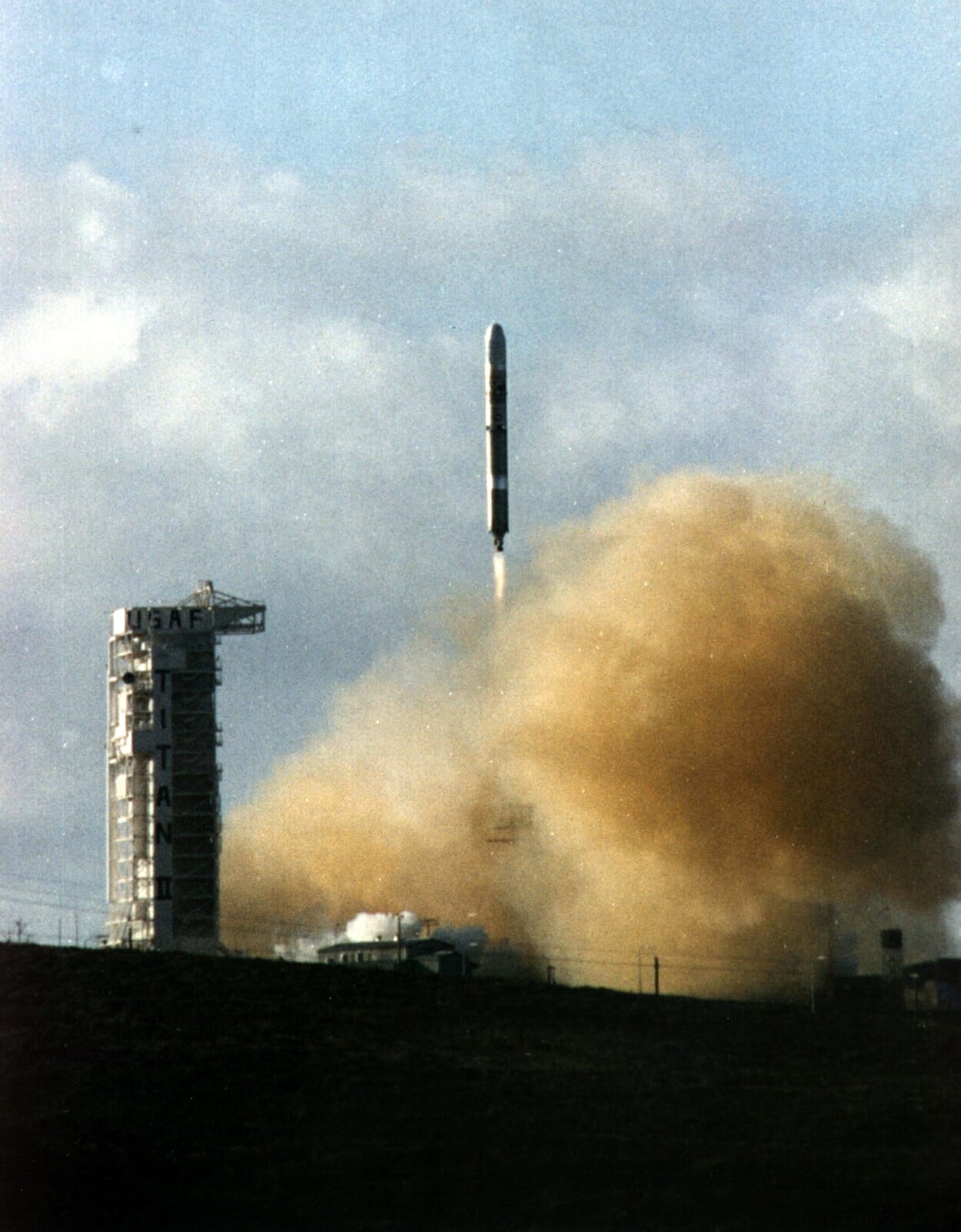 During the Cold War, Arkansas played a role in the protection of the nation by housing a series of intercontinental ballistic missiles across otherwise peaceful farmland. Intercontinental ballistic missiles (ICBMs) were developed in response to the Soviet Union achieving nuclear capabilities. The first ICBMs, called Atlas, were ready by 1959 and deployed at air force bases around the nation. These missiles had a range of 5,500 miles, but they required a high level of upkeep.

The United States quickly developed a second model of ICBMs called Titan. Titan I missiles were stored in silo lifts and had to be raised to the surface to be fueled before launch. This left the powerful nuclear warheads exposed to attack. A missile took 15 minutes to launch and had to be fueled with a highly flammable mix of kerosene and liquid oxygen. These shortcomings led to the rapid development of the Titan II missiles, which would become part of the three-pronged nuclear strategy the U.S. military used for the next 25 years.

The Titan II missile was the tallest ICBM used by the U.S. military.

The Titan II missiles were the largest intercontinental ballistic missiles ever developed. They stood 103 feet tall and had a range of 9,300 miles. These ICBMs were fueled with Aerozine 50, which allowed the fuel to stay in the missile while stored in its silo. The missile could launch in 60 seconds, without the cumbersome raising and fueling procedures the Atlas and Titan I models required. The Titan II missiles were located near three air force bases around the country: Davis-Monthan Air Force Base in Arizona, McConnell Air Force Base in Kansas and Little Rock Air Force Base in Arkansas.

The missile sites in Arkansas fanned out from the base into Cleburne, Conway, Faulkner, Van Buren and White counties. The newly formed 308th Strategic Missile Wing oversaw the operation of 18 missile sites, manned by groups of four soldiers 24 hours a day. Though these missiles were judged essential to the protection of the United States, storing and maintaining them proved deadly. During the 25-year period of operations, Arkansas experienced two disasters connected to the missiles.

The first disaster occurred on August 9, 1965 at launch complex 373-4, located near Searcy. This was the first missile site to become operational in Arkansas in 1963. The Air Force decided to take measures to improve security within the launch complexes. A civilian crew was working throughout all nine floors of the missile silo, which plunged 150 into the ground. A welder accidentally hit a hydraulic fluid line with his welding rod, which sparked a fire that quickly filled the missile shaft and sucked the oxygen out. Out of 55 workers, only two survived.

The first Titan II missile in Arkansas was installed in a silo near Searcy in 1963.

On September 19, 1980, a second tragedy struck the 308th Strategic Missile Wing. Two airmen were performing maintenance at Missile Complex 374-7, located 3 miles north of Damascus, the evening of September 18th. An airman dropped a wrench socket and it fell 80 feet and pierced the thin skin of the rocket’s first stage fuel tank. The aerozine 50 fuel immediately began leaking into the launch duct.

Air Force personnel were evacuated, and a civilian evacuation soon followed as concerns grew that the empty fuel tank could collapse and bring the rest of the rocket and missile down on top of it. The second fuel tank, sitting just above the first, contained a different fuel that could spontaneously ignite if a collapse occurred and it came into contact with the aerozine 50 already in the launch duct.


Titan II rockets were adapted to use in the space program and launched the first Gemini manned missions in the early 1960s. After the missiles were retired, they were again used as space launchcraft until the last one was launched in 2003.

In the early morning hours of September 19th, two airmen entered the complex to measure the airborne fuel concentration. They were ordered to leave the launch duct when the measurements proved alarmingly high. The two airmen had just left the missile silo to await further orders when the rocket exploded at 3 a.m. The silo’s launch door was propelled over 600 feet from the launch complex. The nuclear warhead was also ejected from the missile silo. Fortunately, its safety mechanisms prevented any loss of nuclear material. The warhead was found 100 feet from the launch complex.

Senior Airman David Livingston, one of the two airmen on the scene, died from injuries sustained during the explosion. The second airmen survived his injuries, while 21 others suffered injuries from the blast and following rescue operation and cleanup. The explosion scattered debris across 400 acres of farmland. The site was closed, and President Ronald Reagan chose to retire the Titan II missile program, announcing his decision a year after the Damascus Titan II missile explosion. It took six years to retire the missiles, demolish the launch ducts and fill in the silos with debris.

In Arkansas, three launch sites remain with both launch pads and control centers. These sites in Springhill in Faulkner County, Southside in Van Buren County and Center Hill in White County are now on the National Register of Historic Places.