Under That Arkansas Mistletoe 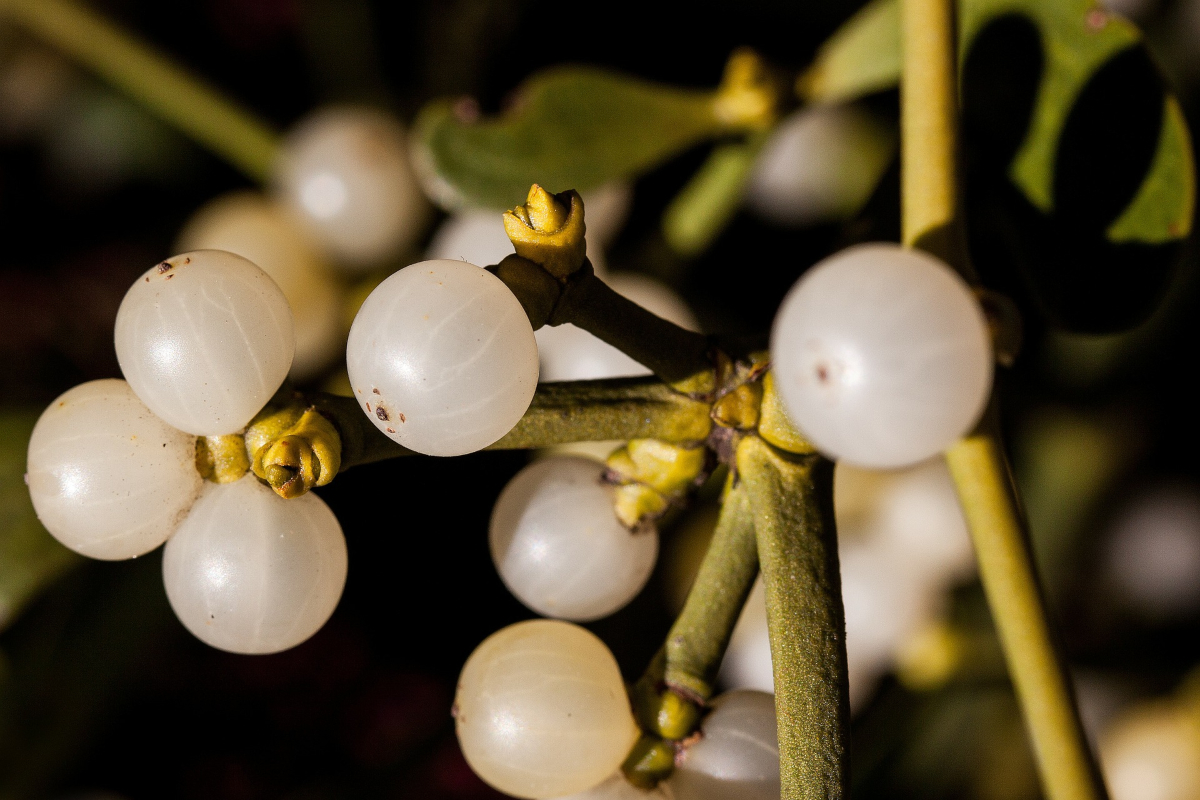 If you’ve ever sung, “I saw Mommy kissing Santa Claus underneath the mistletoe last night,” and wondered why they were beneath mistletoe, or even what mistletoe was, you’re not alone. Sharing a kiss under the mistletoe is a Christmas tradition with obscure roots and a celebrated role in Christmas carols. Even in Arkansas, where the plant grows natively, mistletoe can still be found hanging above doorways at Christmas time.

A house decorated for Christmas circa 1900 with a large ball of mistletoe. Photo: Library of Congress

Mistletoe has a long history. It is an evergreen, parasitic plant that burrows its roots into trees and uses the tree’s water and nutrients to survive. The most common form in Arkansas is eastern American mistletoe, one of 1,300 types from around the world. The shrub grows in a ball high in the branches of its host tree. In Arkansas, the plant prefers areas that are low lying, with plenty of humidity, such as near rivers and creeks. However, it can be found in treetops throughout the state. Mistletoe prefers elm trees, but it can survive in almost any type of tree. The plant produces white berries which are sticky and often carried by birds from one tree to another, spreading the parasitic plant. Though mistletoe won’t kill a tree quickly, it will slowly draw nutrients away from it. It can only be removed by pruning the tree limbs hosting the plant or through chemical removal.

Though many consider mistletoe an invasive species because of its parasitic nature, it does play a role in the ecosystem. Its berries provide food for birds and other animals, and squirrels and birds will use the larger clusters as cover for nests. Mistletoe is also the only source of food for the great purple hairstreak, a butterfly whose origins are in the south, including southern Arkansas. Young larvae feed on the plant. Without mistletoe, the south would miss this butterfly species.

The tradition of hanging up mistletoe at Christmas comes from several sources. Celtic Druids believed the plant had the power to heal and collected it during the solstices. They are likely the first to use mistletoe around Christmas time, since the winter solstice falls so near Christmas. It should be noted, mistletoe is toxic and shouldn’t be consumed. The Romans also favored mistletoe in their celebrations of Saturnalia, which honored the god Saturn and ran from December 17th to the 23rd every year. The Romans traced this celebration and the mistletoe tradition to the Greeks, who believed the plant enhanced fertility. The Romans hung mistletoe over doorways to represent peace and love. Finally, in Norse mythology, the god Loki formed an arrow from the wood of mistletoe and shot the son of Frigga, the goddess of love. In one version of the story, Frigga was able to heal her son under a mistletoe tree and declared that anyone who stood under a mistletoe tree would be protected and also deserved a kiss.

It was this blending of lore that created the Christmas tradition of hanging mistletoe above a doorway and then receiving a kiss for standing beneath it. In Victorian-era England, the tradition was alive and well. A gentleman could kiss a lady beneath the plant and pluck one berry from the mistletoe. When the mistletoe was picked clean of berries, it no longer held its power to give kisses to those beneath it. The writer Washington Irving referenced hanging mistletoe in his story, “Christmas Eve” alongside singing Christmas carols and lighting a yule log. Irving is credited with creating many of our American Christmas traditions through his writings.

Mistletoe is plentiful in Arkansas, and in the late 19th century, the state began exporting the plant to other parts of the nation each Christmas. In 1893, the Chicago World’s Fair organizers asked each state to send a state flower. Neighboring state Oklahoma sent mistletoe, and it ignited the demand for the Christmas greenery. In 1906, the Arkansas Gazette wrote that the greenery was in high demand and being shipped by entrepreneurial Arkansans to other states. The most common method of obtaining mistletoe, especially clusters high in trees, was by shotgun. In 1910, mistletoe around Little Rock was difficult to find, as it had been harvested and sold. Mistletoe was shipped by rail as far away as New York City.

Thomas Nast favored mistletoe in several of his drawings, including this one, “Christmas Flirtation” from 1882.

More recently, mistletoe has become harder to find around Christmas. Many garden centers and plant nurseries no longer carry mistletoe as part of their holiday greenery since the plant is seen as invasive. There are options to purchase the plant through online retailers, but if you do, remember that mistletoe is poisonous and should be kept out of the reach of children and pets. Perhaps the best way to find mistletoe in Arkansas to grace Christmas doorways is the old-fashioned way, trekking through the countryside until you spot the greenery hanging in clusters in treetops. Since Arkansas is no longer exporting large quantities of the greenery, it is once again plentiful around the state.

So this season, if you find yourself singing, “Oh by gosh, by golly, it’s time for mistletoe and holly,” you know the history of this interesting plant and its role in Arkansas Christmases past.

It’s spring in Arkansas. Trees are budding, flowers are blooming and...

While Women’s History Month is about honoring the women in our past and...

Women have long impacted the state of Arkansas, but it wasn’t until...

One response to “Under That Arkansas Mistletoe”