Find a Miracle at the Wye Mountain Daffodil Festival 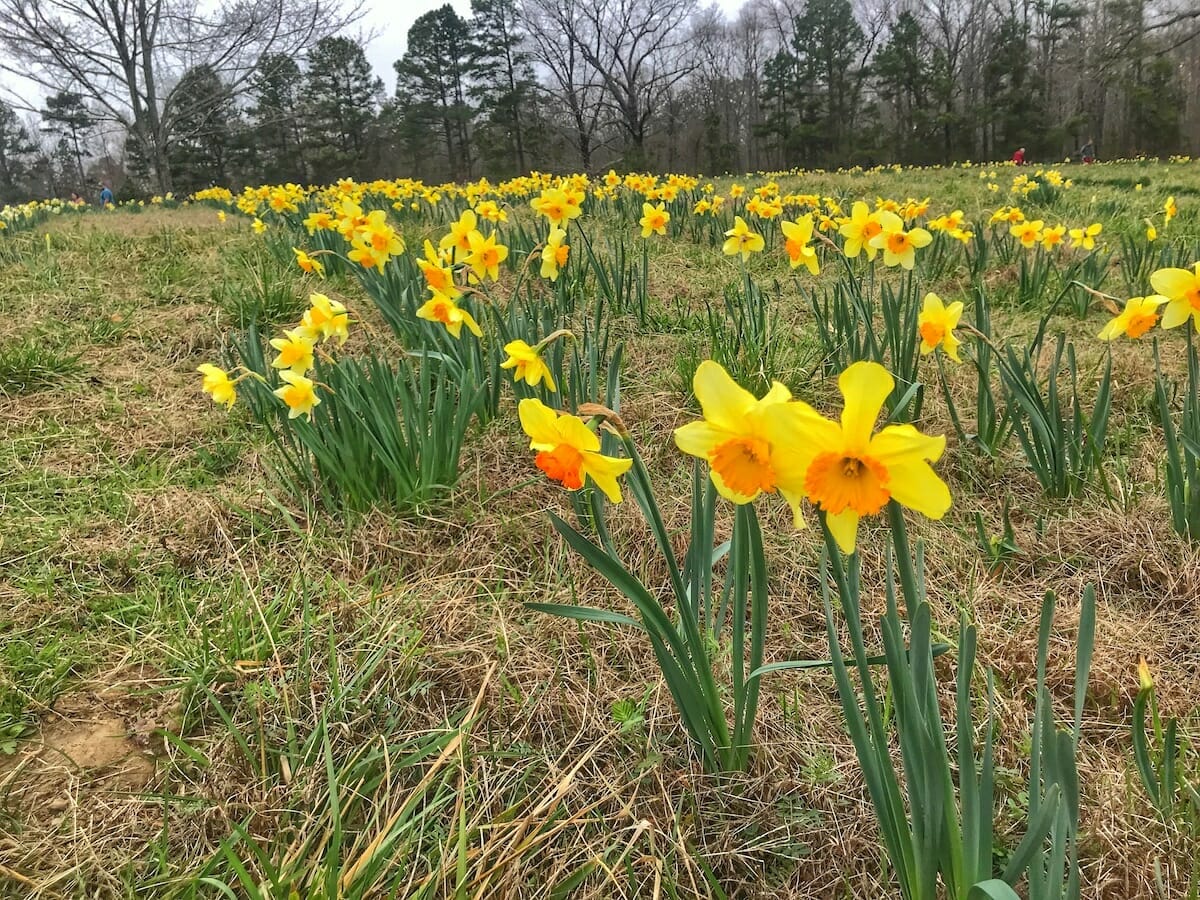 The Wye Mountain Daffodil Festival officially turns 44 this year. The history of the flowers extends back to the mid-1920s when a gift and a proposition from a local feed store owner changed Wye Mountain forever with the miracle of a blossoming daffodil.

Austin and Bessie Harmon moved from Missouri to the Wye Mountain community in the early 1920s. They developed a fruit orchard on a 7-acre plot adjacent to a small schoolhouse where the Wye Evangelical United Brethren Church met. The Harmons were faithful members of the small, close-knit church community. But financially supporting themselves and the church, which later merged with the Methodist faith, was proving to be challenging.

The 1920s economy fluctuated up and down. And as the Great Depression dawned, Americans had to get creative to make a living. In 1927, Harmon made his semi-annual trip to Little Rock to stock up on provisions for the coming months. His journey included a stop at Hackett’s Feed Store, a well-known establishment located in Little Rock’s historic Arcade Building.

In the 1920s, a trip to the city was not only a necessary occasion to gather supplies but a time to visit and catch up on the latest news and information. As Harmon talked with the proprietor of Hackett’s Feed Store, there was likely a conversation regarding the highs and lows of the fruit business and the struggle of supporting his family and the Wye Mountain church.

In a gentleman’s agreement that would change the Harmons and the Wye Mountain community for generations, the feed store owner gave Harmon a half-bushel of Danish daffodil bulbs to plant in his orchard with the stipulation that he return the following year with at least a quarter-bushel of bulbs.

Daffodils produce seeds and pollen that give rise to new flowers; however, they also reproduce through asexual cloning or bulb division. Encouraging either type of reproduction will help the daffodils to spread. Once the spring blooms begin to die down, you can dig into the soil surrounding the plant and lift the clump of bulbs. Smaller bulbs can be removed from the mother plant and transplanted to a new location, thus beginning a new plant that grows and reproduces.

Harmon returned home with his half-bushel of bulbs and planted them throughout the orchard with the help of his wife and grandson. To their delight, the orchard seemingly miraculously exploded with blossoms in the spring. The Harmons could profit by collecting and selling the flowers in the city. They returned to Hackett’s Feed Store with more bulbs than promised to make good on their deal with the shop owner.

The Harmons cut and sold bouquets in the city for years, especially to railroad passengers headed to Tennessee and Louisiana. Word of their beautiful blossoms spread far and wide. They began to ship bulbs and blooms across the country thanks to a contract with TG&Y, a well-known five and dime variety store chain headquartered in Oklahoma City. The retail chain operated a thousand stores in twenty-nine states at their peak.

By the 1960s, word of the field of flowers outside of Little Rock began to spread. Every spring, visitors would travel to Wye Mountain to admire the blooms and pick a few to take home. Often the visitors would make a small donation to the church. So while not necessarily encouraging the visits, the Harmons didn’t discourage them either.

When Austin Harmon died in the mid-1960s, the work of caring for the blooms and dividing the bulbs fell to Bessie and younger generations of Harmons. Although they had essentially stopped the export of their blooms and bulbs, the family and members of the church enjoyed the visitors that came each spring and continued the intensive work of dividing the bulbs, so the flowers would continue to grow.

After generations of joy and success, everything crumbled one spring during the late 1970s. A naive reporter disclosed the location of the field in a front-page story. A parade of people followed and nearly picked the area clean of flowers, digging up bucketfuls of bulbs and leaving a mess in their wake. The miracle which had once saved the Harmons and the tiny Wye Mountain church seemed to disappear before their eyes.

Parishioners and community members had a problem that needed solving and a field that needed saving. The Wye Mountain Daffodil Festival was born. Through hard labor, they saved the field. And guests were still invited to view the flowers, but blooms and bulbs had to be purchased rather than taken freely.

The 44th Annual Wye Mountain Daffodil Festival is March 5-20, 2022. Enjoy live music, crafts and food while you stroll through the field full of beautiful flowers. Visitors come from far and wide to see (and smell) the miracle. Taking pictures is encouraged. And visitors are invited to take home a piece of the Wye Mountain miracle when they purchase blooms or bulbs. Visit the Wye Mountain Church on Facebook for up-to-date information regarding the festival.