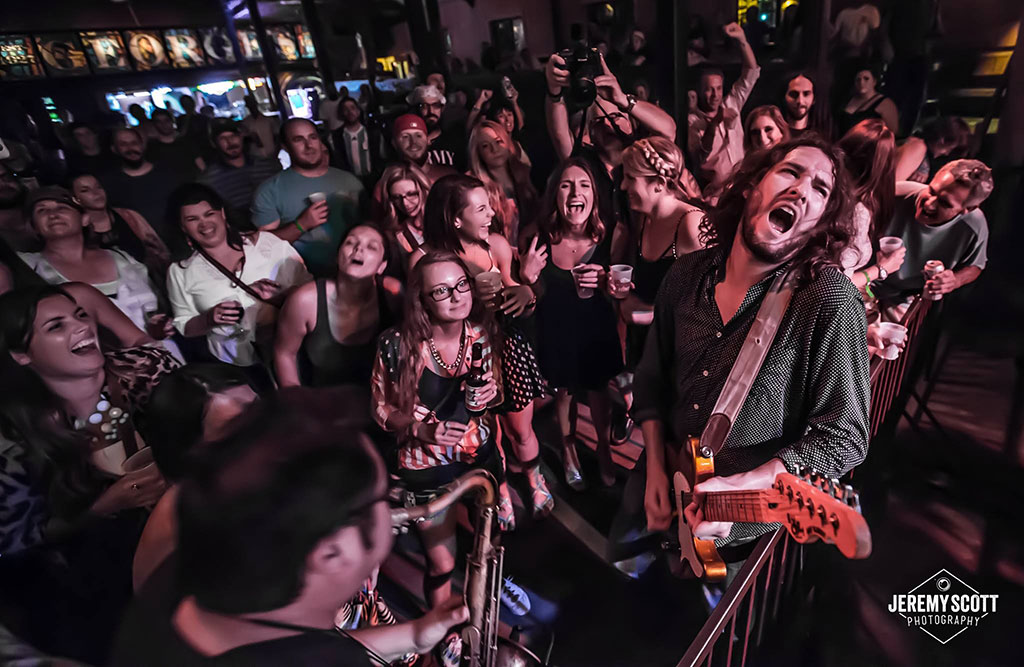 Originally a restaurant, bar and general store, George’s is named for its first owner, George Pappas. It’s changed hands only three times in the 90 years since it first opened, and current owner Brian Crowne plans to continue his efforts to bring in top-tier entertainment. The first in the next wave of acts to pass through will be Karl Denson’s Tiny Universe, featured at a combination New Year’s Eve and 90th birthday party. Denson, who has recently been touring as the saxophone player for The Rolling Stones, felt like the right way to kick off a year’s worth of music, Crowne said.

“What’s left to be done [with the venue] is to continue to curate good music,” Crowne said. “I want to sustain the love of live music in Northwest Arkansas. If I do my job as my time as the owner, I feel like the curator of George’s.”

‘Curator’ is a good word for the operator of a place that serves as a music museum. Hundreds of acts have played on one of the various George’s Majestic Lounge stages. Leon Russell (R.I.P.), Pat Green, Derek Trucks and Robert Cray have all played there. So too have Robert Randolph, Tower of Power, current Grammy nominee Sturgill Simpson and many more named as the favorite Fayetteville shows ever in a recent Fayetteville Flyer giveaway poll.

The venue and supporting structure has changed many times during its 90-year run but has always stayed open. It’s believed George’s is the oldest continuously operating bar in the state of Arkansas. And the actual wooden bar just inside the doorway has always stayed the same, said Betty Harrison, who owned the club with her husband, the late Dr. William Harrison, from the late 1980s until selling it to Crowne and then business partner Suzie Stephens in 2004 (Crowne bought out Stephens in 2014). The Harrisons had their first date at George’s in the 1950s, and Betty Harrison remembers it as a place where young folks hung out. There was the small lounge area, and there were smaller rooms on several sides where couples snuck off for a bit of canoodling.

Music took place most weekends but was not a point of emphasis. There was also a large television – the first color television offered by a bar in Northwest Arkansas – but it only worked half the time, Harrison said. In short, George’s was indeed a lounge, a place to sit down with friends.

“It was so dark, and not nearly as large,” Harrison recalled. The Harrisons visited frequently in the late 1950s, and many more times throughout the decades, and it was on a walk through town they decided to see if the venue’s second owner, Mary Hinton, had any interest in selling the place. She had been approached several times, but finally opted to sell to a couple she knew loved the club.

Seeing someone who loved George’s retain ownership is part of what prompted the Harrisons to sell the club to Crowne, she said. Crowne’s band, Oreo Blue, performed at the venue many times during the Harrison’s ownership and he pretty quickly fell in love.

“It was always a place I had a kinship for as a musician,” Crowne said. “Musicians come in and fall in love with the venue. I remember looking out at the audience, and I remember the diversity of the crowd. It’s a place where people from all walks of life come in and enjoy music and it’s comfortable.”

The Harrisons had worked to expand the footprint of the club behind the lounge into the garden area, and Crowne continued that work upon taking possession. The garden area went from being an open-air spot with a huge maple tree during the Hinton era of the club to one with an actual roof and artist accommodations during the Crowne era. Previously, artists were either on their own to get ready for a show, or used a semi-permanent trailer parked behind the venue. That changed courtesy of a 2012 overhaul of the venue that including building a proper dressing room and enhancing the technical capabilities of the venue. The plug-and-play systems used by many bands actually plug in to George’s back-of-house systems now.

One response to “George’s Majestic Lounge”