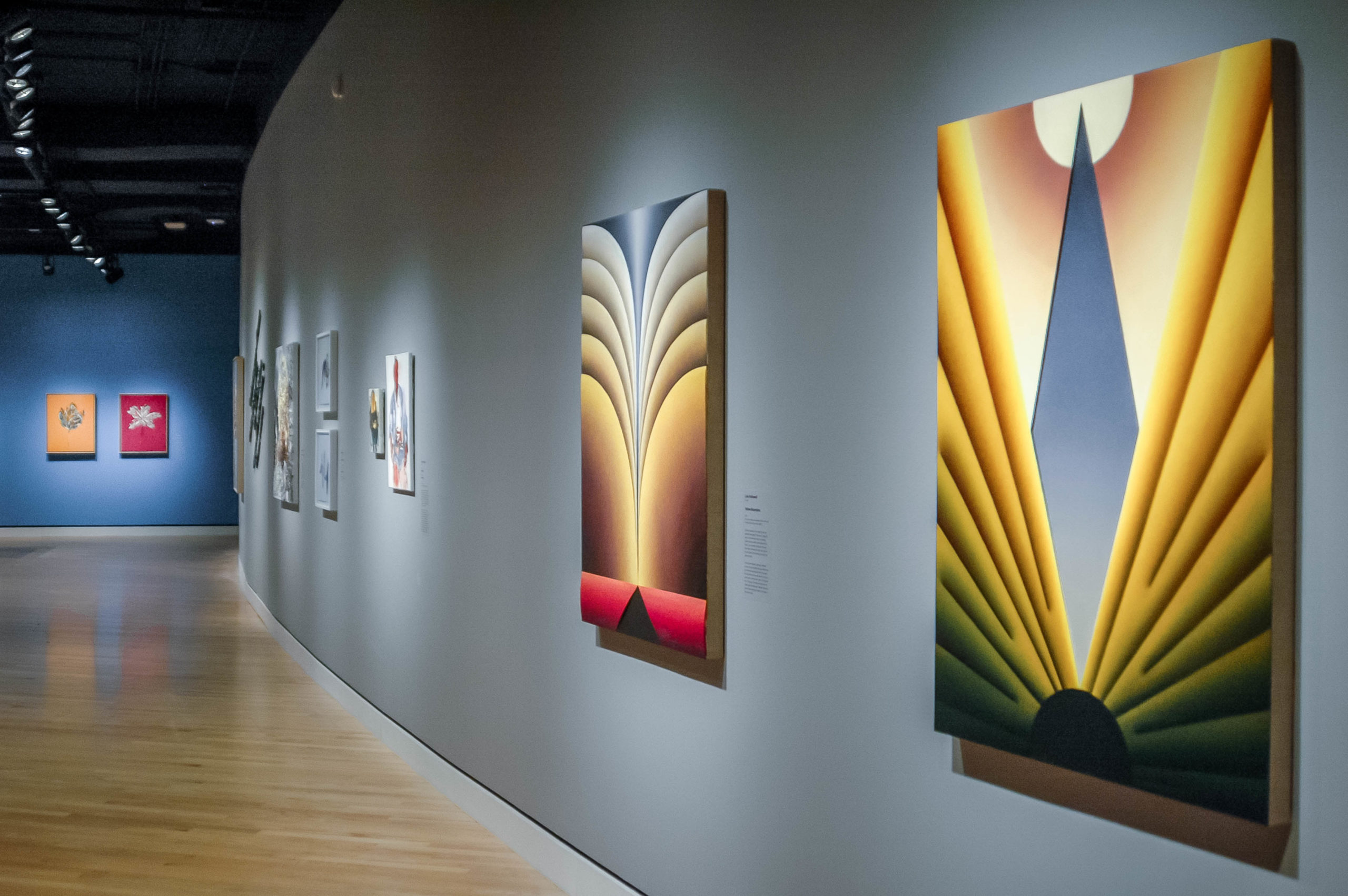 The exhibit combines more than 30 works by O’Keeffe from various points of her career with the works of more than 20 present-day artists, many of which were visited in their studios by the curatorial duo responsible for the show.

Works by O’Keeffe were assembled from the Crystal Bridges permanent collection and museums such as LACMA in Los Angeles, the Amon Carter Museum of American Art in Fort Worth and the Kemper Museum of Contemporary Art in Kansas City, among others. Other artists were selected for the creativity in their work and ties to O’Keeffe, whether purposeful or more subtle. Haynes said she and Alligood would focus on the art first, and then ask the contemporary artists what they thought their connection to O’Keeffe might be.

“We saw the inspiration that was coming out in the work, but we never started the conversation with it,” Haynes said.

The participating artists all obliged, and many had deep connections or fond memories. Many of the artists had books filled with O’Keeffe’s art sitting around as inspiration. The works now sit in conversation with each other in the Crystal Bridges gallery space. Recognizable works by O’Keeffe are displayed next to works by newer artists.

For instance, an untitled work by Jennifer Packer that draws inspiration from the flowers at the funerals of black Americans who have died as a result of violence can be found next to O’Keeffe’s “Yellow Jonquils #3.” If you just look at Packer’s work, you might not see the connection, but the bold yellow flowers in both pieces are definite companions when presented as neighbors.


The work “Light Atlas” by Cynthia Daignault contains 360 individual paintings which were inspired by stops she took on a cross-country road trip. Photo: Kevin Kinder

The two works are in the “Flowers” part of the exhibit, one of many groupings of like-minded works. Others are “Finding the Figure,” “The Intangible Thing,” “Still Lifes,” “Cities and Deserts” and “The Beyond.” Each explores a sub-theme in O’Keeffe’s work. “Cities and Deserts,” for instance, explores her dual lives as a resident of New York City and the deserts of New Mexico. “Still Lifes” focuses on her famed still life works and includes many of her more famous compositions, including the stunning “From the Faraway, Nearby” which features a large abstract animal skull with massive horns floating over pink mountains. “From Faraway” is packaged next to “Deer Skull with Blue Vase” by artist Anna Valdez, who also created a site-specific wallpaper that accents her work.

Among the companion works in the “Cities and Deserts” section, positioned opposite of a small O’Keeffe painting of a church, is the large-scale, wall-consuming work “Light Atlas” by Cynthia Daignault. It features 360 small paintings that represent stops Daignault made on a cross-country journey.


The exhibit pairs like-minded works by O’Keeffe with contemporary artists. An example is O’Keeffe’s “From the Faraway, Nearby” with is located next to the Anna Valdez work, “Deer Skull with Blue Vase.” Photo: Kevin Kinder

These mini-themes all converge at one point – O’Keeffe’s ability to blend reality with creativity through different mediums, themes and decades.

“Resolving the knife’s edge between realism and abstraction kept her going,” Alligood said.

She kept going until her death in 1986, increasingly relying on assistants to help her with works. The title of the exhibit takes its name from the 1972 work “The Beyond,” which is thought to be the last work she finished without assistance.

“We’re proud of this exhibition and how it looks broadly at her career,” Alligood said.

The exhibit’s time in Bentonville is also busy with related activities, such as gallery talks, an interactive gallery that allows deeper exploration of fragile works on paper and workshops.

After its run at Crystal Bridges, “The Beyond” will next be seen at the North Carolina Museum of Art in October and then makes a final stop at the New Britain Museum of American Art in Connecticut next March.

A selection of events associated with “The Beyond”

One response to “Georgia O’Keeffe On Display at Crystal Bridges”