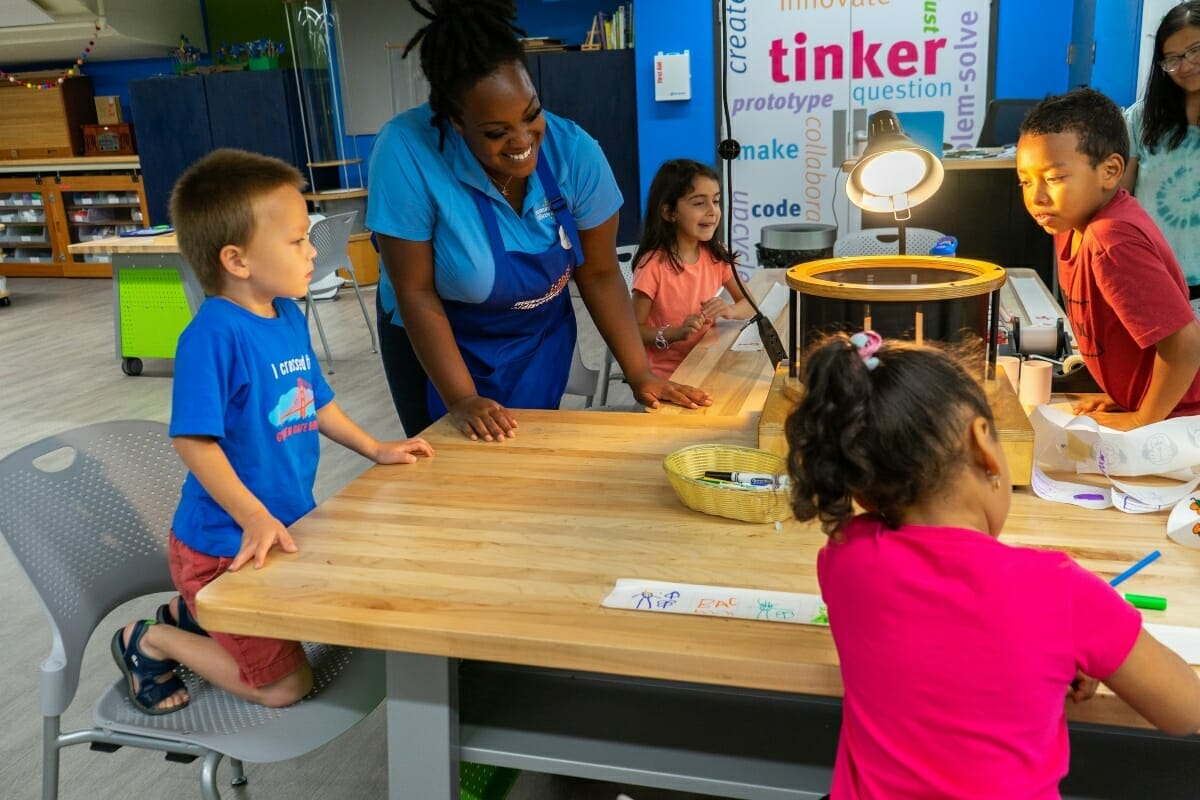 The Museum of Discovery in Little Rock is an adventure into the past and the future, and it will only get better. The museum is celebrating its 95th anniversary this year, which coincides with the renovation and updating of its exhibits. The hands-on museum is a perfect summer or weekend activity for families, but it also offers many learning opportunities for all ages.

The Museum of Discovery was founded in 1927 by Arkansas author and activist Julia Burnell Smade Babcock. Babcock went by “Bernie” and wrote over 40 novels and hundreds of newspaper articles, all while raising five children alone after her husband died. Babcock spent time in New York and Chicago. Still, Arkansas remained her home, and she was determined to bring more culture to the state and provide educational opportunities to its residents. In 1927, she opened the Museum of Natural History in a downtown Little Rock storefront.

Photo courtesy of the Encyclopedia of Arkansas

The first museum included articles donated from the Smithsonian Museum. It displayed taxidermy specimens, a collection of Arkansas mussels, art and a children’s display. The museum moved to City Hall and then to MacArthur Park in 1942. It changed its name to the Museum of Science and Natural History in 1964. After another name change and accreditation by the American Association of Museums in 1993, the museum landed on the name Museum of Discovery in 1998, along with a new location in the River Market district.

Since 2012, the Museum of Discovery has focused on STEAM exhibits to encourage visitors to learn and enjoy all science, technology, engineering, the arts, and mathematics have to offer. The museum also underwent a $9.2 million renovation from the Donald W. Reynolds Foundation in 2012. Later this year, a new climbing tower will open, with more renovations to come in 2023. For now, visitors can still find plenty to occupy their time and learn about at the museum. A day includes TESLA shows about electricity, animal shows with the museum’s resident animals, including ferrets and possums, and science shows.

Visitors can meander through over 90 hands-on exhibits where kids can experience tornado alley, a glimpse into the human body, and more in the 25,000 square feet of space. There is a space dedicated to the youngest learners, ages 0-6, to spark interest in the sciences from an early age. Until September, explore the museum’s newest traveling exhibition entitled “AlegreMENTE|Happy Brain: Celebrating Early Connections.” The bilingual Spanish/English exhibition encourages young children to walk through a playful forest while adults learn how their everyday interactions with their children build strong social, emotional, cognitive, language and motor skills.

The Museum of Discovery isn’t just for kids, though. It regularly offers events for adults to continue a love of science and learning. These events are labeled “After Dark” and spotlight different hands-on activities and access to the museum. The most recent event, “Science After Dark: Top Gun,” focused on activities surrounding the release of the recent Top Gun sequel. Upcoming “After Dark” series include “Tinker After Dark” in June and “Science After Dark: RenaisScience Faire” in October. Follow the Museum of Discovery Facebook page to stay up with these fun events and purchase tickets.

The museum also holds “Wiggle Worms” every Tuesday, Thursday and Saturday at 10:30 am for preschoolers to move, learn, and create. During school breaks and summers, the Museum of Discovery often holds special events for kids, and this summer the museum has a full roster of summer camps. Discovery camps are for children ages 6-13 and let kids explore biology, zoology, physics and more, all geared around fun themes like unicorns, Legos, Minecraft and more.

The Museum of Discovery brings the museum to you through community outreach programs. A museum educator can lead classrooms and auditoriums through a variety of science programming. Other community opportunities include family field trips to the museum, virtual science programs, family STEM nights and camp-ins in the museum. The museum also offers free STEM camps for girls ages 12 to 16 each summer in off-campus locations. Girls in STEM programs are led by female STEM professionals and allow girls to participate in STEM activities and consider careers in STEM. This year the camps will be held at the University of Central Arkansas in Conway and Pulaski Tech in North Little Rock.

The Arkansas Discovery Network is also part of the Museum of Discovery. Established in 2006, the Discovery Network’s mission is to make quality STEAM education available across the state of Arkansas. The network offers a series of workshops around different science or maker themes. They also have traveling exhibits they rent for three to six months. Libraries, museums, and schools can join the Discovery Network and borrow or purchase STEAM kits to offer STEAM education to learners in their area of the state. Discovery Network members also join community events like Toad Suck Daze and Tinkerfest to reach more community members. Educators, librarians, and museum professionals can learn more about workshops or become network members at thediscoverynetwork.org.

Don’t miss a summer or weekend adventure at the Museum of Discovery in Little Rock this summer. Find out more at museumofdiscovery.org and enjoy a fantastic science museum 95 years in the making.