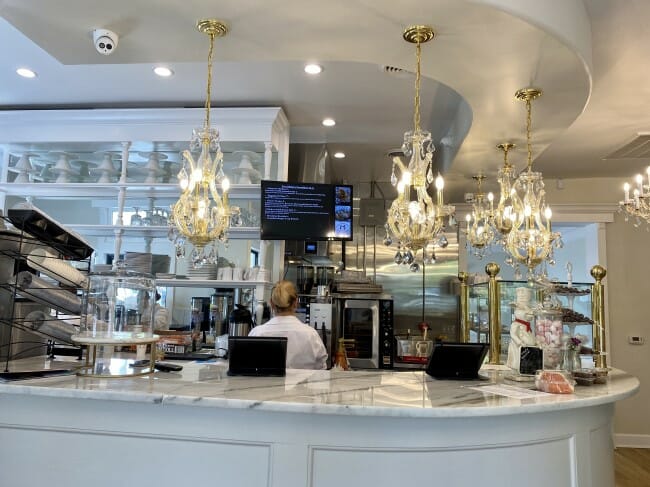 Long time Sherwood restaurant, Two Sisters Catering & Café, recently added a second location in downtown Little Rock. And while I’ve still yet to try out the original spot, I can certainly vouch for the new digs after a recent, successful lunch.

Typically speaking, I tend to wait a month or two after a new place opens before checking it out, but after folks kept messaging me with positive comments about Two Sisters, the time felt right to pay them a visit.

First things first, the new location is absolutely beautiful, with a super clean and fresh look that practically pulls in the customer. Two Sisters is fast-casual, so order and pay at the register. Food should be ready in just a few minutes, thanks in large part to attentive service and a focused menu of burgers, salads, sandwiches, and desserts.

The highlight of your meal will probably be the eggplant fries. This is no knock on the other dishes, but rather, a glowing endorsement on the appetizer itself, which includes massive, chicken-fried eggplant sticks. Dip each bite into the accompanying marinara sauce and be thankful you’re eating one of the best meal-starters in Little Rock.

The Classic Burger is also a huge hit, thanks in large part to the thin, American cheese-covered patty that just dwarfs the white bread bun. All the traditional fixings are there, including super crisp romaine lettuce. As mentioned, Two Sister’s always has a nice selection of sandwiches, including the Club, which comes loaded with sliced turkey and ham, along with a pile of bacon. You can get it on wheat bread or Texas toast. I recommend the former. Either way, just make sure to order the sandwich with a side of onion rings. What these rings lack in appearance, they make up for in taste. Slightly greasy and with bits of batter falling off with each bite, these rings are fried food nirvana. I like to fancy myself as a bit of a connoisseur with onion rings and these were truly fantastic.

We also tried Two Sisters’ signature sandwich, the Cranky Sister, which comes with grilled chicken, bacon, pepper Jack, fried jalapenos, cheddar, mozzarella, and jalapeno ranch on ciabatta bread. I respect this unique sandwich and see how it would appeal to a large audience, but over-the-top concoctions like this one get less and less appealing to me as time goes on. In short, this sandwich is a lot to deal with because of a heavy hand of cheese, but I do recommend you try it at least once.

I imagine no visit to Two Sisters would be complete without dessert. So, make sure to get a hunk of strawberry cake with cream cheese icing. It’s so good—with bits of strawberries throughout the cake and a thick, crazy sweet icing that makes it darn near impossible to stop eating.

In the end, Two Sisters looks to be a dynamite addition to downtown Little Rock’s food scene. And it’s one that will thrive because of outstanding food and service.

Two Sisters has a full breakfast menu, and, of course, does catering. The downtown location also has a convenient drive-thru.

You already know how much I love the onion rings at Seaton’s Scott...

If you live in Central Arkansas (or anywhere in Arkansas, for that...

Social media can make me do crazy things when it comes to food, like...

One response to “Lunch at the New Two Sisters Catering & Café”