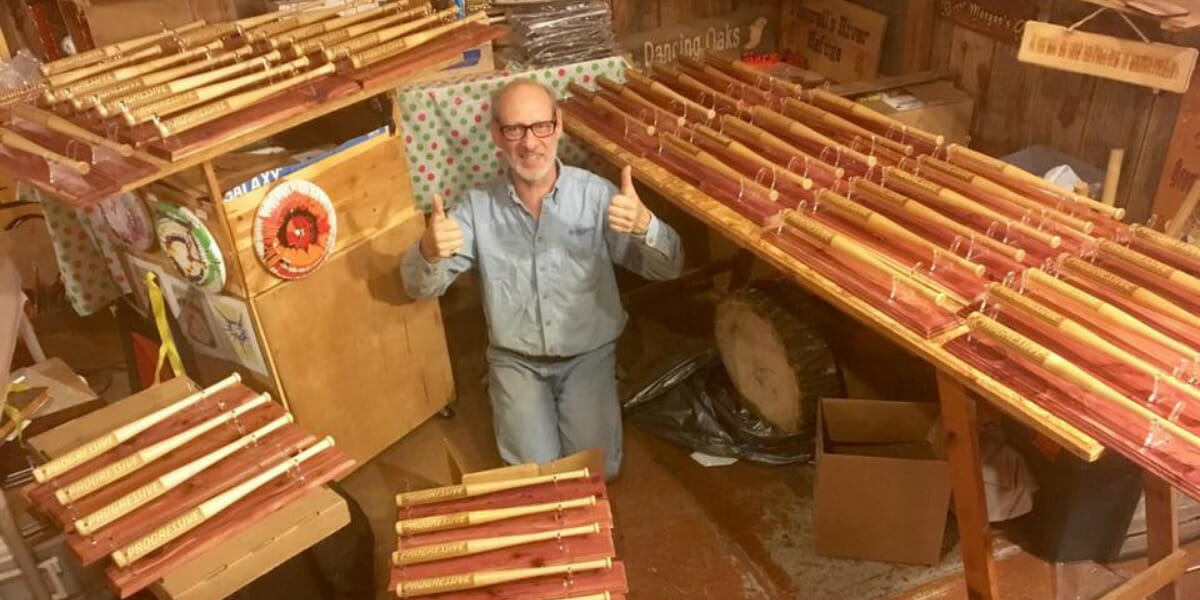 Marc Herring is like any small-business owner in a rural Arkansas community. He is the go-to guy for school trophies. He serves on the Chamber Board, advocates for his community, and applied for a Payment Protection Program loan in the spring of 2020.

Herring is also the owner of Ozark Classic Crafts Mall, the first designated space in Arkansas for crafts and craft art. Thirty-eight years ago, the business launched with a focus on artisans. It is a place to come to dream and imagine. The wares are made by more than 60 artists, with most of those coming from the north-central Arkansas region.

Coming off the heels of two tourism and festival conferences, Herring was ready to tackle the dreams he had for 2020 as he planned to hit the road at festivals across the state.

But March 15 hit and that plan changed. He closed the shopping door to his store and started to make plans for what was next as the downtown Hardy community shifted to endure the following months of a global pandemic.

“I received a $2,000 loan, added $2,000 myself and was holding on for as many days as possible until I’d have to close and file bankruptcy,” Herring shared. “I did what I could to keep my part-time help cleaning and working in the workshop.”

On a Sunday afternoon a few weeks later, he received an email from the Small Business Administration notifying him of their approval for his $47,000 loan. With the extra help, he knew he could make it for the year. And he did. He kept his staff around and fulfilled orders from Etsy and Shopify as they crawled in.

While Herring is the owner of Ozark Classic Crafts Mall, he has grown his business through the Stikmon WoodWerks company and makes personalized laser-etched gifts, awards, signs and ornaments. Additionally, they carry a few products invented and developed in the craft mall; a calming cross, walking stick, wizard wand, and My Imagination Desk for children.

These products have always been the backbone of the woodworking line, but in 2016, two pivotal historical events changed everything for the product lines: Donald Trump became president, and the Cubs won the World Series. While both can seem thoroughly American on their own, these proved perfect moments to grow the laser bat-etching memorabilia line with a bat made from wood grown in southern Illinois and formed by an Amish community in Missouri. The Donald Trump bats became a “bread-and-butter”-type product and repeatedly sold, increasing sales around the 2020 presidential race.

In May, “a dude named Jared” texted Herring, wanting to connect on the bat and help accelerate sales through Facebook ads and a digital marketing campaign. It worked. Three days later, the first order for 100 bats was placed, and business rolled through the November election. Six months later, he had laser-engraved the 45th president’s face 15,000 times.

As the popularity of these bats grew and started getting in collectors’ hands, a fateful call changed everything.

A man who had purchased a bat for one of his friends called Herring and said it was “the best piece of personalized memorabilia he had ever seen.” The gentleman on the phone held licensure for Major League Baseball, and he was ready to do more work with the Arkansas artisan.

Stepping up to the Plate

Lucky for Herring that call connected him with the right person, and birthed a new project.

“If you want to play with baseball bats, you’ve got to do a home plate first,” said Herring.

During the first week of March, a home plate campaign ran exclusively with Touch of Modern, an online merchant that created daily deal campaigns with limited access. For Herring, having the opportunity to produce officially-licensed baseball memorabilia became more than a dream come true.

“My team has been preparing for this for three weeks. We are making the boards from scratch here in my shop. They are constructed completely of beechwood and we are pressing them and cutting them out here. Every corner of my store is covered with stacks of wooden boards ready to become home plates.”

Herring went on to share, “This is a huge deal for me and our town. Locals who have heard about what’s going on keep stopping in asking for their order and I take it, and they will be part of the campaign when this first rolls out on the world wide web.”

For the first time since owning his store, Herring was financially able to close down the month of January and just play catch-up. This happened to coincide with the request and new partnership and gave him the extra time to get ahead and ready for a new project.

Almost 365 days after the pandemic began, this rural Arkansas Main Street business owner holds on to the dream of a multimillion-dollar company operating in his tiny crafts mall.

“I’ll have to expand to a new property that makes the bats and baseball memorabilia across town. It’s a huge thing for our town, and I’m already thinking about a photo op spot for visitors out front.”

Herring credits his faith, dreams and vivid imagination for his success.

“I tell people I have five rules in life. And No. 5 is, ‘if it’s not fun all the time, what’s the point of rules one through four.’ Have fun and enjoy life!”

It sounds like a visit to Hardy, Arkansas, and the Ozark Classic Crafts Mall should be on our Arkansas Bucket List.

No segment or industry experienced the economic impact of the COVID-19...