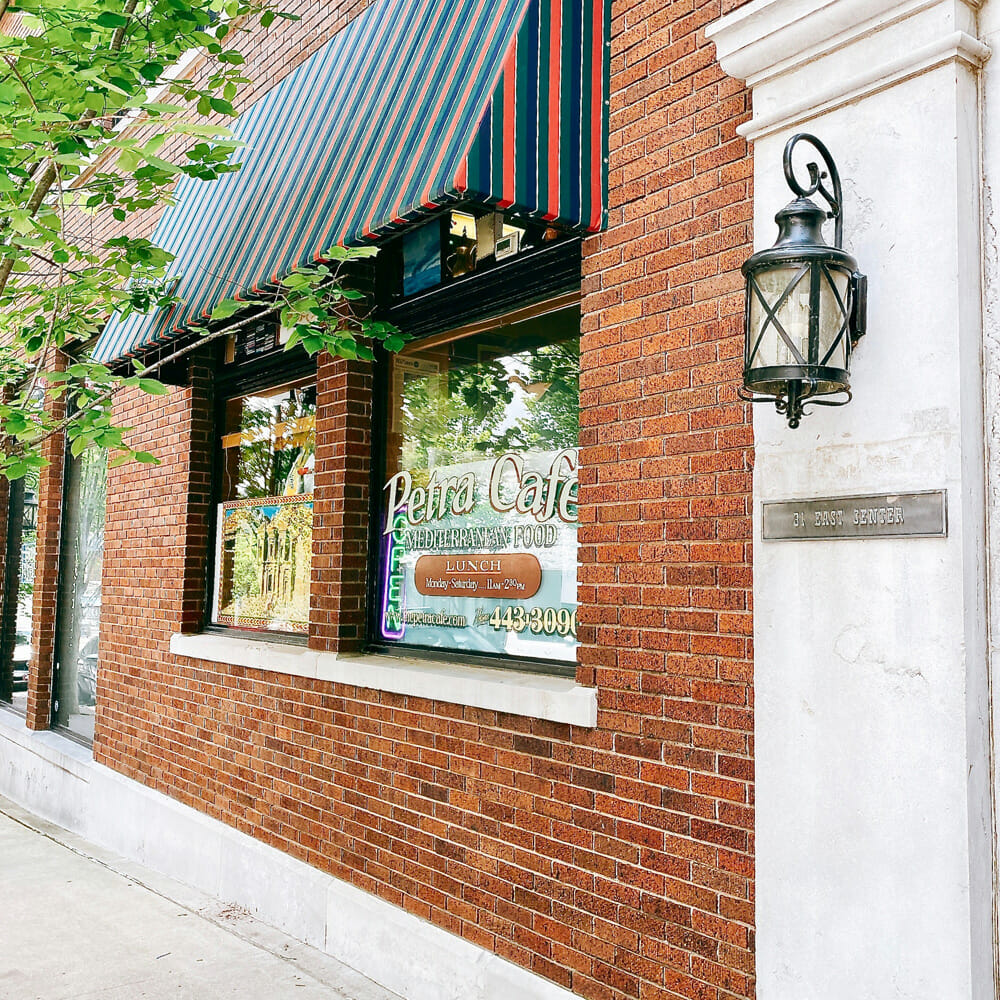 If you are tired of dining at places with no character, change the scenery and head to Petra Cafe in downtown Fayetteville – where you enter as a stranger and leave as a friend.

If you want to know why Petra Café is so beloved, you must first understand how special the owner is.

In 1973, Saleh (pronounced Sal-lee) Faur moved to Fayetteville made it his home away from home. Born in Jordan, Saleh moved to Italy three years before coming to the states. It was a smart move because it was in Italy where he met his wife. From Italy, they both planted new roots in Fayetteville and, forty-eight years later, still call it home.

It wasn’t long before Saleh put down roots with a gas station on the corner of 15th and South School (where Nomad Music venue now exists). He called the station Petra Stop and ran it for 10 years before he sold it.

“I sold the gas station and then my family and son convinced me to go into the Mediterranean food experience. I actually didn’t want to stay in it that long, but my son said I should give it a try for six months. He said, “if you don’t like it, get out of it then.” Actually, it turned out to be a nice, uplifting experience.”

There is an ancient city in Jordan called Petra that is one of the World’s Seven Wonders. Saleh wanted a name for his new Mediterranean restaurant that reminded him of home. So, Petra was the name he picked.

The word Petra means rock in Greek. Saleh tied the memory of his Jordanian home to Greek Mediterranean food and the name Petra was perfect.

Don’t let the word “tiny” fool you into thinking that Saleh wasn’t able to expand. You see, tiny and welcoming was intentional then (as it is now) because the space has its own personality. Why mess with perfection?

“The 22 seats create a personality for the place and for the people who come to it because there are so many friends created in this little spot. People who sit at the bar and never met before will end up coming back the next week for a lunch date together. Back at Petra. And they have created ever-lasting friendships.”

“Actually, we have had some marriage proposals here at Petra! I have several people who live in Fort Smith [who] come once a week to eat here. I have people in Springfield who come once a month, just to have lunch at Petra and shop. Makes me feel good about the whole place. This is why I don’t want to get any bigger. The stamp of the place is being so personal.”

Even IF Saleh wanted to retire, that’s not an option because he has customers who say that if he did, it would create a riot on the streets of Fayetteville!

Okay, so what is popular?

No surprise here… the whole menu is popular. Petra Cafe doesn’t have a large menu, it’s fairly short and to the point and consists of items that you can count on maybe two hands. It’s the combinations that make it really interesting and intriguing to customers.

They sell a lot of hummus, Tabbouleh and Baba Ghanoush. The Foule dish is quite popular and is a sort of Middle Eastern chili where fava beans are cooked low and slow with onions, tomatoes, and a variety of herbs and spices.

There are daily lunch specials that include both a platter and a cup of soup. If you’re interested in the Foule dish, come on a Tuesday because it is the platter of the day.

I personally like to go with a gyro platter whenever I try out a new Mediterranean place, just to ground myself in the restaurant’s style. Petra Cafe’s May Platter with beef/lamb gyros topped with tzatziki sauce with two side items is a great start for your first visit.

You can’t go wrong with any side items, from hummus to Greek salad, stuffed grape leaves and more. Try a different one with every visit… and while you’re at it, make it a fun goal to sit in each of the 22 seats.

Don’t even think about leaving Petra Cafe without Turkish coffee and baklava!

Saleh joked with me that “there aren’t too many places that have Turkish coffee in Northwest Arkansas,” and I believe he is right. I can’t think of one! He was quick to add that he didn’t mind if anyone actually did serve it because he believes that ”competition is always healthy! It gives people options and choice.”

Each cup of Turkish coffee is made on-demand. This isn’t big-batch coffee; it’s on-demand coffee. The process is very simple, involving boiling water and adding a little sugar, boiling some more, adding coffee grounds and boiling it two or three more times.

“The coffee grounds are finer than espresso, like flour or something like that. It’s a fine texture. But when you pour it into the cup, the grounds fall to the bottom of the cup.”

The baklava is the only dessert in the restaurant. They make their own glaze with honey, rose water, powdered sugar and cream cheese. What more do you need?

At the end of the day, Saleh wants to make sure that all his customers and employees leave happy.

“I don’t want anybody to have a grudge about anything. The extension of my family is here and that’s how I like it. My employees and customers are my strongest point. Food comes second.”

Have wanderlust and wish you could travel anywhere in the world right...

You know that feeling when everything is neat and tidy and you feel like...

0
0
Spud Doctors: Come for the Food and Leave as Friends
Lyndi Fultz