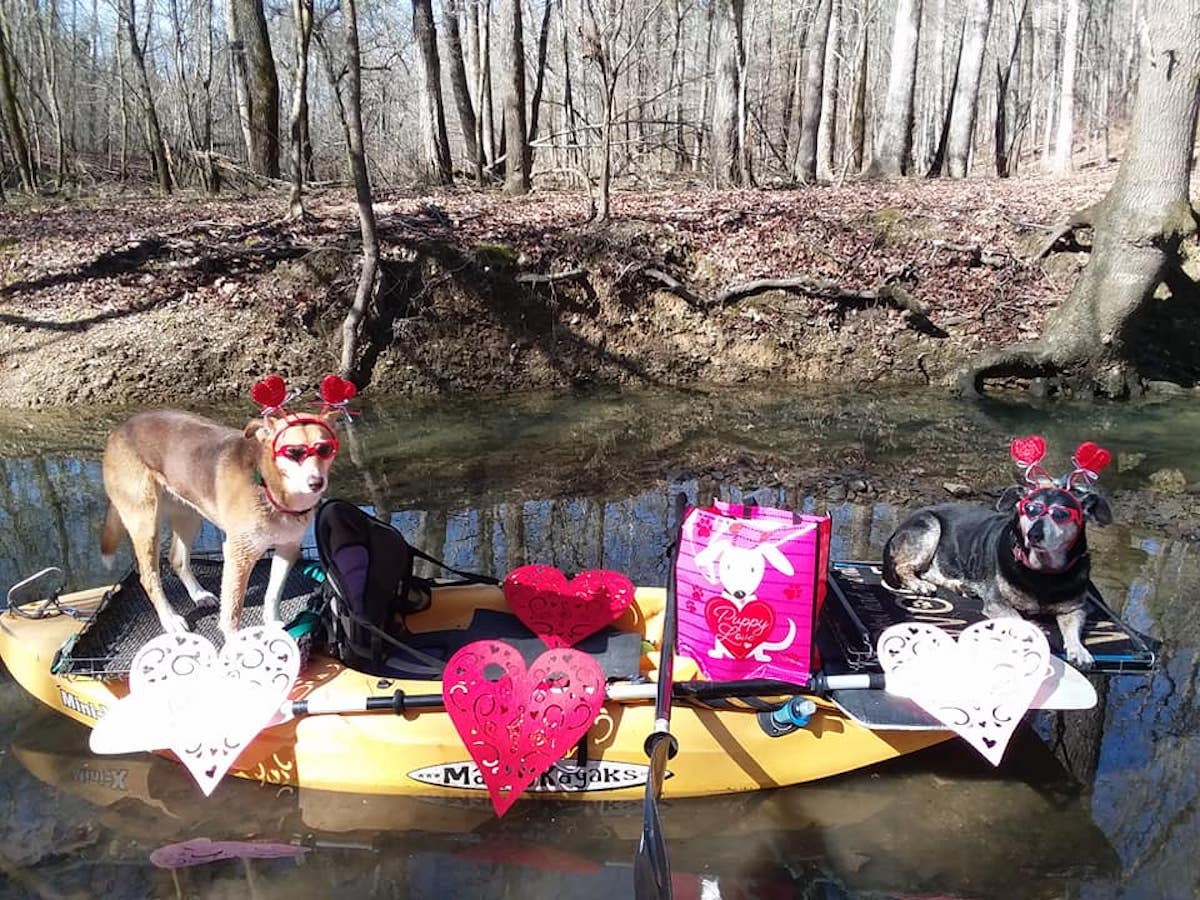 If you’re a dog-lover or a kayaker in Arkansas, there’s a good chance you’ve seen a picture of Sherrie Pros and her two special canine companions. The trio can be spotted in a kayak on Arkansas waters and on social media: all three of them dressed up in seasonal and themed attire: hats, headbands, feathers and uniforms. Pros, who lives in Hot Springs, never planned to become a kayaker or to own dogs, much less animals that she would dress up and who would end up as fan favorites among other pet owners.

Bringing a dog into your home is a love and joy unlike any other. The dog becomes a trusted friend, a companion, a family member. The animals have unwavering loyalty, and they always seem to know just when you need them most.

When you bring home a rescue dog (one that has been abused, neglected, or otherwise abandoned by an owner) all of those feelings are somehow magnified. Feelings were certainly a big reason why Pros unexpectedly ended up with her two-dog crew.

Many people shy away from rescue dogs out of fear that they will bring home an animal with problems, but these dogs can make wonderful pets, and shelters will often help you find one that matches your family’s needs. The sad truth is that nearly 700,000 dogs are euthanized each year in America because no one was willing to take a chance on them.

I took a chance. Of all the dogs I’ve had over the years, my two best were both rescue dogs.

Archie being trained by an inmate as part of the Paws in Prison program.

Hagrid came from a puppy mill where he was confined to a small concrete block for most of his first year of life, and when I first brought him home, he was actually afraid of grass. Archie is the one I lovingly refer to my prison dog. He was picked up by animal control in a cemetery when he was a few months old, and as luck would have it, he was selected to be part of the Paws in Prison program, where an inmate trained him until we adopted him.

Pros also took a chance on two dogs. The story of her and her 2-dog crew starts with a woman who was just looking to relieve some stress.

When I saw this picture, I laughed and wanted to know more. Surely there had to be a story here!

Sherri Pros didn’t set out to become a dog owner, but a couple of strays tugged at her heartstrings. Having taken in several vagabond dogs over the years, her current companions, Ruger and Destiny, came to her as stray puppies. She found each dog around her home, wandering and looking for food. When searches for the owners turned up empty, Pros took the dogs in.

She admits she didn’t really want dogs. Keeping a pet is a big responsibility and she knew that she would have to invest time and money and perhaps even sideline some of her plans to travel. But she also knew the dogs would bring her happiness and be her companions.

Pros lives alone and works at a nursing home where she served as the activity director for many years. In talking with her, it was clear that she enjoys having a good time with the folks in her facility. Although her responsibilities changed several years ago, she still loves her job but admits that it is both mentally and physically demanding.

Pros was looking for an outlet, a way to unwind and get away on her days off. She wanted to be refreshed so she could bring her best self to her job.

In 2011, Pros bought a kayak from an ad on Craigslist. She had never kayaked before but knew a few people who enjoyed it and figured it was a great way to get outside and be in nature. Pros grew up spending a lot of time outside and knew the benefits of being outdoors.

It didn’t take long for her to fall in love with kayaking and every chance she got, she was soon heading out to the lake. But she felt guilty about leaving her dogs at home. Eventually, she decided to bring them along.

Ruger and Destiny loved being on the kayak, and Pros loved having them. After an excursion on the water with them, she came home feeling refreshed and relaxed, and returned to work with her mind and body in the right place. These trips became her outlet for stress relief, and she jokes that she kayaked to “burn off the crazy.”

In fact, it was a shirt with that same declaration that led to her first famous photo with her dogs. She thought it would make a funny picture, so Pros grabbed a few silly hats from her prop collection that she amassed from her days as activity director and convinced the dogs to wear them while she snapped a family portrait of the group on her kayak: the two dogs in full costume and Pros in a shirt that said, “I kayak to burn off the crazy.”

After posting the photo in a kayaking group on Facebook, the positive comments poured in. Group members related to the message on her shirt and loved the dogs with hats. The rest is history.

Pros began to plan photoshoots, collecting props to coincide with upcoming holidays. Gathering up the dogs, she would head out to one of her favorite spots on the water and the fun would ensue.

The dogs aren’t trained to sit, though they put up with her silliness for a few minutes. It often takes 10 to 20 shots to get one that is worthy of posting. After photos and a leisurely paddle, Pros uploads her pictures to many of the kayaking groups she belongs to. It didn’t take long for her to become known across the web as the “kayaking dog lady.” People who follow her anxiously await the posting of her next photo series.

For a lighthearted mental health break: take to the water, take some dogs or just take a look at the photos of this unconventional family.

Pros posts her pictures online on her 2-Dog-Crew Stylin’ Facebook page, and in a handful of Arkansas kayaking and rescue dog groups. You can see her latest pictures here:

For the Love of Strays

Rescue dogs make excellent companions. Check out these local resources for adopting a dog (or a cat). Or search for a shelter or facility near you.

Friend of the Animal Village

Out of the Woods Animal Rescue

One response to “2 Dog Crew – A Woman, A Kayak and Her Rescue Dogs”