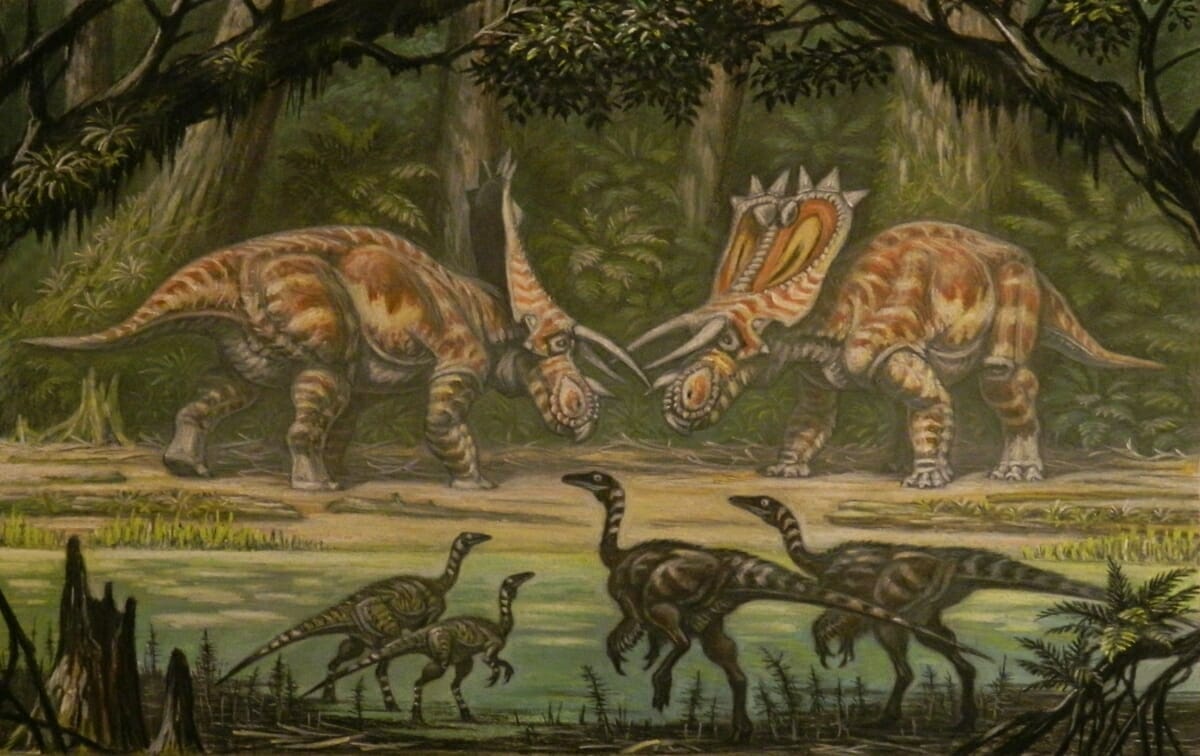 The history of Arkansas stretches back to over 500 million years ago when the state was covered in water from a prehistoric ocean. Between 250 and 300 million years ago, the Ozark and Ouachita Mountains formed, which lifted parts of the state out of the water and allowed the preservation of some fossils. During this time, life in Arkansas was mostly aquatic in the form of trilobites—small, hard-shelled creatures that dominated marine life at the time. Trilobites eventually gave way to brachiopods and mollusks, whose fossils can be found even today in the limestone bluffs in northern Arkansas. 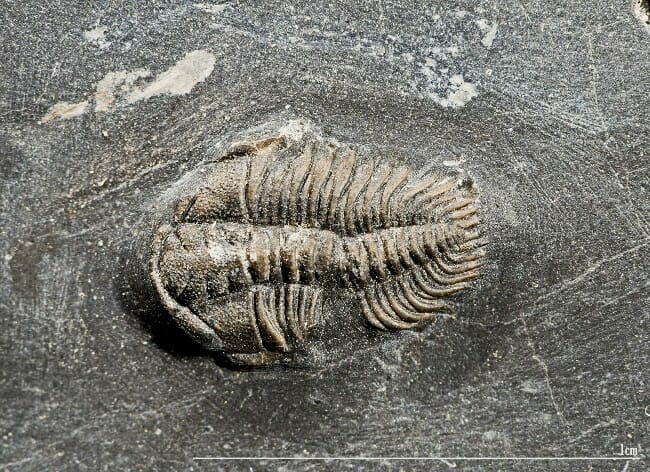 Trilobite By Didier Descouens via Wikimedia

Much of the diversity of life in prehistoric Arkansas is still unknown. Since the state was covered in water, few fossils could be left behind. The Cretaceous era is often called the time of the dinosaurs. This time period began 144 million years ago and lasted until 65 million years ago. It featured some of the most famous dinosaurs, like Tyrannosaurus rex, velociraptors, triceratops and the great brachiosaurus. Though these dinosaurs roamed through the United States, it is hard to trace their presence in Arkansas. However, parts of Arkansas were not completely underwater during the late Cretaceous period. The rocky areas south of the Ouachita Mountains have yielded a few examples of life during that time.

Map of the end of the Cretaceous era around 65 million years ago.
Photo: By Ron Blakely, Colorado Plateau Geosystems via Wikimedia

The only dinosaur bones to be discovered in Arkansas were found in 1972. Joe B. Friday found the bones on his land in Sevier County. The bones are from the right hind foot of a dinosaur in rocks that date from the Cretaceous era. The bones tell us that dinosaurs certainly lived in Arkansas during the time, even if not much evidence survived. Professor James Harrison Quinn from the University of Arkansas cleaned and examined the bones. He found similarities between the bones and the species Ornithomimus, which was an ostrich-like dinosaur. Quinn named the bones “Arkansaurus fridayi” in 1973.

Arkansaurus by Nobu Tamura via Wikimedia

In 2003, ReBecca Hunt, a University of Arkansas alumna and a paleontologist for the U.S. Bureau of Land Management, studied “Arkansaurus fridayi” and declared it to be an unknown species. Arkansaurus is the second oldest ornithomimosaur in the United States and resembles an ostrich with a long neck and feathers instead of scales. Though not large in terms of dinosaurs, it was taller than humans and walked on 2 feet, with the ability to run fast. Hunt named Quinn as a second author on her paper in “Journal of Vertebrate Anthropology”, even though Quinn died in 1977 from a fall while collecting fossils. Hunt had studied the Arkansaurus bones since she was an undergraduate at the University of Arkansas in 2001.

Though Arkansaurus is the only dinosaur to be discovered in Arkansas, and to date, the only bones found in the state, there is other evidence of the presence of dinosaurs in the state. In 1983, dinosaur footprints were discovered at a gypsum mine near Nashville, Arkansas. Jeffery G. Pittman was at the mining site doing research for his master’s degree at Southern Methodist University. He drove his truck across the potholed, limestone floor of the quarry every day. After seeing preserved dinosaur footprints in Colorado and New Mexico, Pittman returned to Nashville to study these “potholes”. He realized they were actually part of a vast dinosaur trackway that included thousands of footprints. The prints belonged to sauropods, enormous dinosaurs with long necks and tales and thick legs. The tracks were made as many as 100 million years ago, and the sheer amount of tracks points to this area being a migration path.

The tracks were already deteriorating when the discovery was made and the quarry was scheduled to be mined in January 1984. A quick, six-week excavation took place. Scientists made silicone rubber molds of the tracks, took photographs, made sketches and also preserved some of the original tracks. The Nashville Sauropod trackway was then destroyed in the mining operations. Preservation would have been difficult, but the information that researchers gathered allowed them to continue to study the tracks. The molds of the footprints can still be found at Arkansas museums, including the Mid-America Science Museum and the Museum of Discovery in Little Rock, as well as the University of Arkansas.

In 2011, tracks were again discovered outside Nashville in the gypsum quarry. These tracks belonged to Acrocanthasaurus, a large carnivorous dinosaur that also dates back to the early Cretaceous period. Sauropod tracks were also discovered. A team of researchers used LiDAR technology, which stands for light detection and ranging, to scan the area with pulsed lasers. They used this to digitally recreate the area. This discovery confirmed the presence of theropods in Arkansas.

Alamosaurus was a sauropod that roamed North America during the Cretaceous era. Photo by DiBgd via Wikimedia

Though Arkansaurus is the only dinosaur discovered in the state, it is hopefully not the last. If you want to see dinosaurs in the state, visit the Mid-America Science Museum, which has a permanent dinosaur exhibit, or The Museum of Discovery in Little Rock.

4 responses to “Dinosaurs in Arkansas”