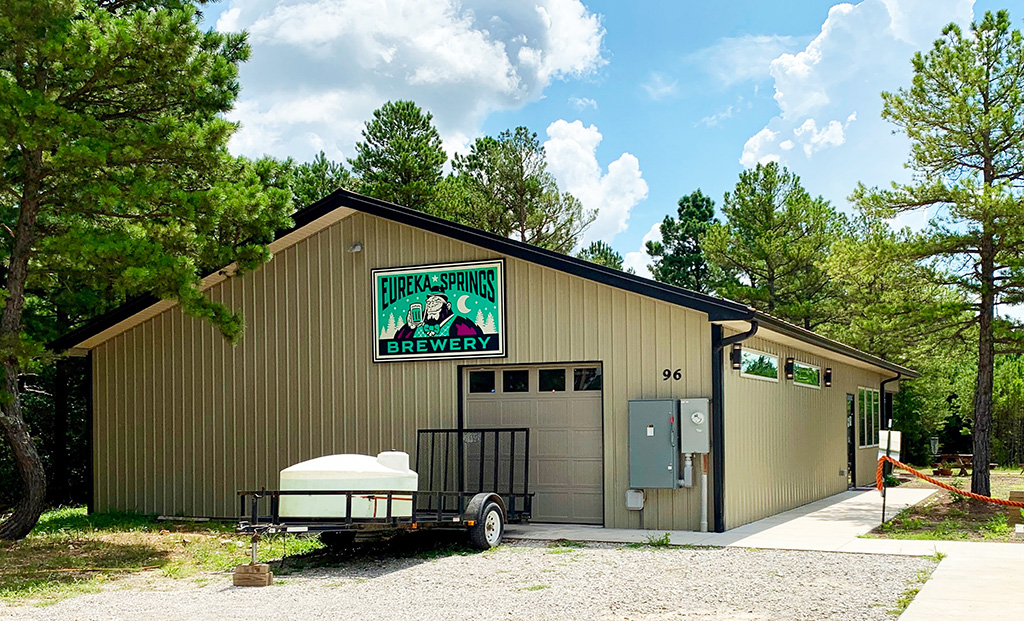 A few weeks ago, we introduced you to the newest brewery in Eureka Springs. Now let us introduce you to the first.

Owned and operated by father-son duo Jeff and Matt Joseph, Eureka Springs Brewery sits on five acres east of downtown, just off Highway 62 on Ridgeview Road. It opened for business in June 2019.

It’s easy to miss if you’re not paying attention, though an old vacant hotel in front of the brewery (which is kind of creepy) provides a noticeable landmark to watch for.

The building itself is an unassuming metal structure built explicitly for the purpose of brewing. There aren’t many frills, but it’s a welcoming space, and the brewhouse is prominently displayed in the taproom.

There are 10 taps behind the wood-wrapped bar, which is adjacent to a cozy indoor seating area with a view of the pine-laden forest behind the brewery. Curiously, there is a nine-hole disc golf course nestled in those trees.

Jeff Joseph is originally from Kansas City, but moved to Northwest Arkansas around the age of 10. He spent most of his childhood in Springdale. The fourth-generation homebrewer said he grew up watching his uncles brew beer.

“It was much different in those days,” said Jeff. “They brewed with malt extract, and they didn’t have all the equipment we have now.”

Jeff eventually picked up the hobby himself. At his peak he was brewing once per week. This prolific beermaking pace would continue for many years, even as a career in mechanical design for a local engineering firm took off.

Like many homebrewers, Jeff harbored visions of opening a commercial brewery. While traveling for work he visited small breweries and took note of the features he wanted to build into his own.

According to Jeff, running a brewery with his son Matt was his ultimate goal.