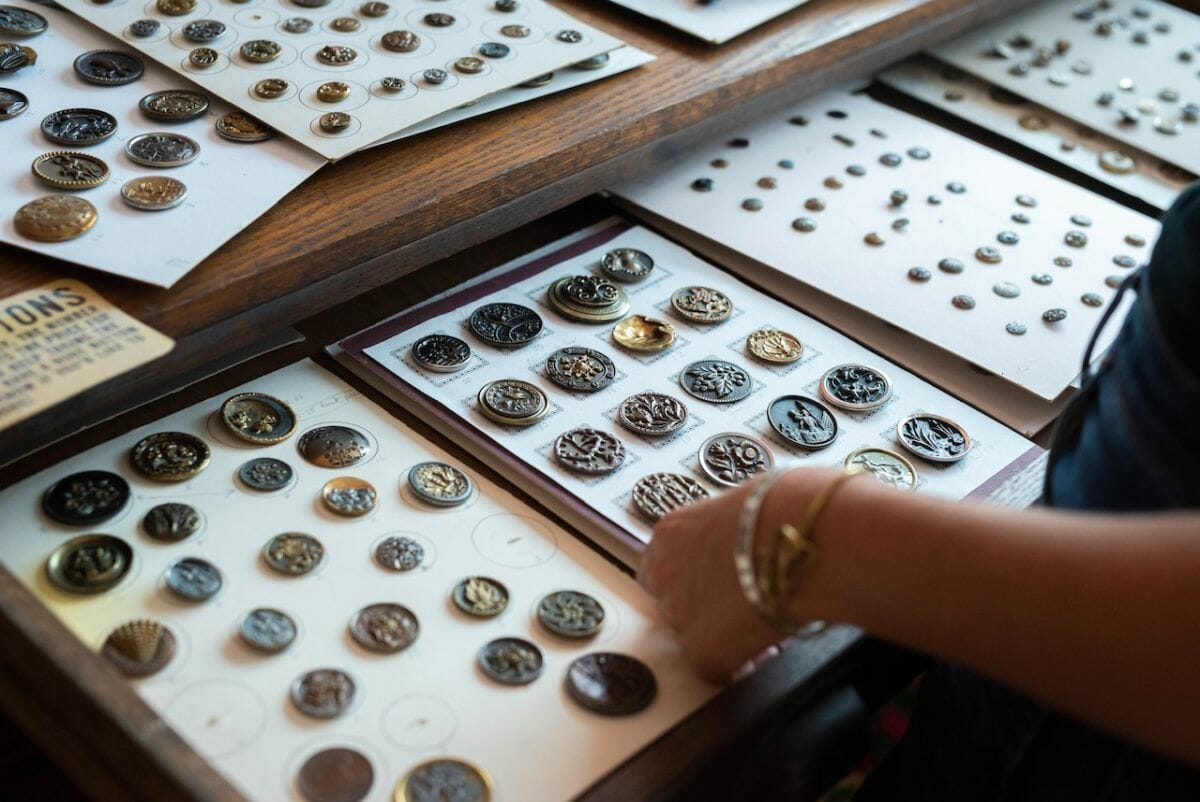 Have you ever considered the humble button? Wikipedia says a button is a kind of fastener that joins two pieces of fabric together. It seems silly to even put much thought into this, right? We button our shirts, we button our pants, we all know what a button is and what it does. But what if I told you that something as unassuming as a button can do more than fasten two pieces of fabric together? A button, or a collection of them, can create a legacy.

In the 1970s, Florine and Gerald Gene Thomason were antique dealers, buying up estates full of items you and I would think of as “valuable” – ornate china cabinets, bedroom suites, or hand-painted china settings. As the couple built their business, they would often come upon a jar or can of old buttons and stash them in a back corner of their shop, mostly forgotten. But somewhere between those early years of antiquing and the 1990s, Florine noticed those jars and cans and began collecting buttons intentionally.

It didn’t take long before the Thomasons were specifically seeking out button collectors and buying full collections. Florine joined several regional button clubs and the National Button Society, which holds annual conventions all over the United States. She dedicated a room in her home to her collection, which allowed her to display the many awards and ribbons she received for her collection. In 2014, the ESSE Purse Museum even hosted an exhibition of a portion of Florine’s collection on their storied walls.

It was during the early days of collecting that Florine’s granddaughter, Brandy Thomason McNair, was introduced to the world of button collecting as a young girl. Brandy is the jeweler behind the Arkansas-based brand Bella Vita Jewelry that operates out of a cute shop on 6th Street in downtown Little Rock. When I asked her what it is about buttons that made them so special to her and her grandmother, she replied “Have you ever looked at antique buttons?”

“I’ve been collecting since I was a kid, just as long as I’ve been making jewelry if not longer. Of course, my button collection has evolved tremendously as I have gotten older. I lived down the dirt road from my grandmother, so I spent a lot of time with her sifting through buttons and jewelry. She got me started collecting and gifted me a lot of buttons over the years. Then I started buying them here and there as I found them. We even had the chance to visit an auction several years ago in Northwest Arkansas that contained a lot of buttons. The auctioneer found me from my website and saw that [Bella Vita Jewelry collects and uses] buttons. He called me to tell me they found a huge collection of buttons in their client’s estate and wanted to tell me in case I might be interested. I thanked him and told him I might drive up. Then my grandma called me. Thanks to Google, the auctioneer had contacted her, too. So as soon as she asked me to go, I immediately said yes. My mom, my grandma and I got to spend the day together and buy buttons.”

In December 2009, Brandy coordinated the purchase of the newest version of “The Big Book of Buttons” for her grandmother’s Christmas gift. In return, she was gifted her grandmother’s old copy the following year.

Florine Thomason passed away in January 2018 and Brandy began making arrangements to purchase the collection that, by that time, was like a part of the family. Florine had made it clear that she wanted Brandy to have the collection, and a year later, in February 2019, the sale was final and Brandy was the proud owner of an extensive button collection she estimates to be “about the size of an SUV.”

“The bulk of the collection dates back to the mid-1800s to mid-1900s, but there are some older buttons in there. I haven’t gotten to spend a lot of time with the collection because of my demanding small business. But I recall [grandma] telling me about some that are much older than the 1850s. Materials range from glass and metal to ivory, bone, horn, resin, bakelite, and everything in between. I cherish every ounce of this collection.”

Brandy says that most of the buttons are sorted and carded by what type of material from which they are made, but some are still loose in bags or boxes. “Carding” refers to the storage method used by collectors in which buttons are attached to squares of sturdy mat board to keep them organized and ready for presentation. But there are also buttons in Brandy’s collection carded on scraps of paper with handwritten notes on them stating the details of where the buttons were collected or the materials from which they’re made.

Although she owns a collection that would fill half of her garage, Brandy hasn’t stopped collecting buttons. She says she is always looking and interested because “you just never know what you are going to find!”

Examples of charms made from molds of antique buttons in Brandy Thomason’s collection.

Brandy began using buttons in her jewelry designs as soon as she launched her Bella Vita Jewelry line in 2008, with rings made from wire and antique buttons. Eventually, she realized she didn’t really want to sell her buttons, so she came up with a way of replicating them around 2011. This win-win solution allows her to share the beauty of her collection but still hoard it like a dragon under the mountain.

In her newer jewelry lines, Brandy works with precious metal clay to create charms and pendants. She makes a mold of the button she wants to use, then casts the button with the clay. When the clay is fired in a kiln, it “sinters”, causing the clay to meld into a solid, metallic material. Once the piece has been fired, it is ready to be tumbled and receive a patina and polish.

Some of us attach a lot of meaning to the large things that are passed from one generation to another – the family farm, the three-piece cherry dining room suite, grandpa’s original 1955 Thunderbird. But for others, there is value, and even sentiment, in smaller items that are also full of history and family connection, like a humble jar of buttons.