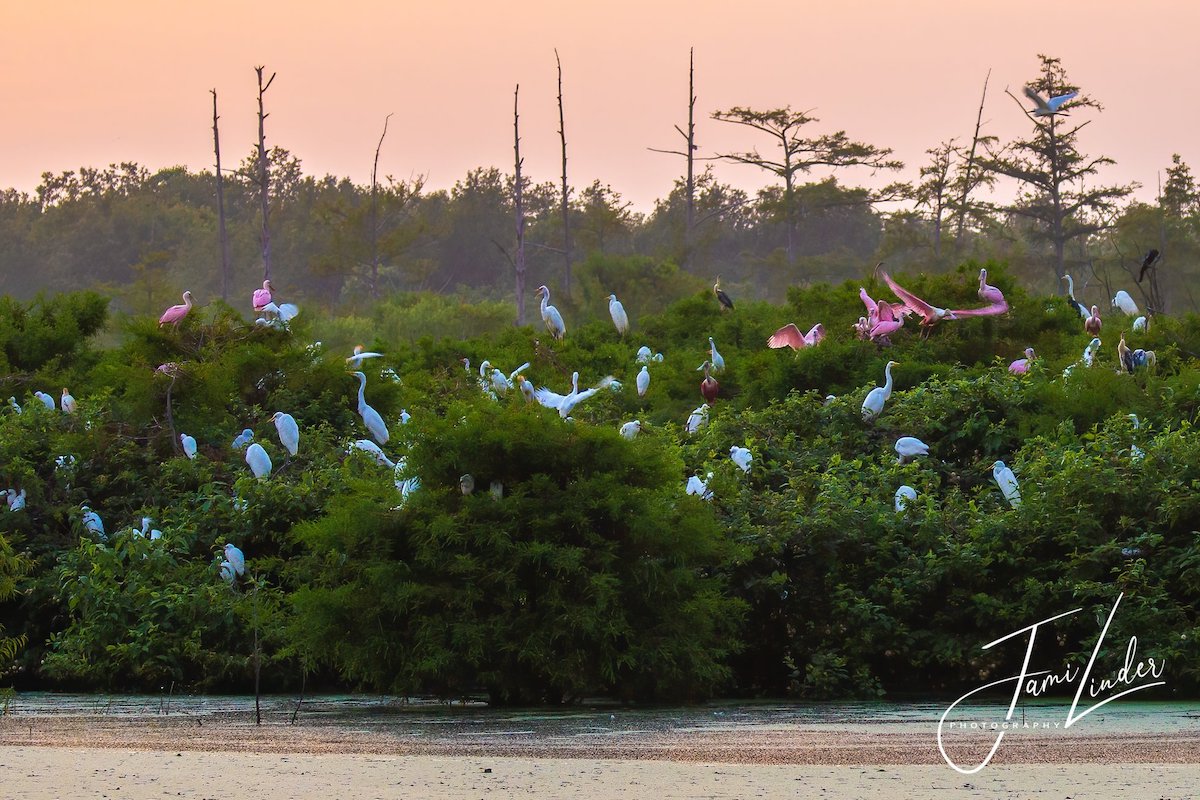 Earlier this spring, Jami Linder, an emergency room nurse living in southern Arkansas, spent her days off taking pictures of wildlife near her home. Although at first she didn’t know what she had found, Linder made a discovery that has excited bird lovers across Arkansas and the south. Photos Linder had taken possibly documented nesting sites for both the roseate spoonbill and the white-faced ibis–two birds not known to nest in Arkansas. Partnering with Karen Rowe, nongame migratory bird program coordinator for the Arkansas Game and Fish Commission, the two set out to investigate further.

Linder grew up in the outdoors hunting and fishing across Arkansas with her father and continued on her own as she grew older. Her typical work schedule of seven days on and seven days off allows her to spend a lot of time outdoors paddling, fishing and shooting photos. Her favorite spots to photograph include the Ponca Wilderness and Crooked Creek in northern Arkansas, where she shoots a lot of turkey, elk and eagle photographs. When the COVID outbreak hit earlier this year, Linder and other staff at the hospital were asked to self-quarantine between shifts whenever possible. Linder opted to spend her days doing what she loved best, taking photos in the wilderness.

Knowing she needed to be as remote as possible, a friend of Linder’s father suggested she come out to his private land in south Arkansas. Previously used as farmland, the area was now an emergent wetland created through the Wetland Reserve Program available through the US Department of Agriculture. The landowner had noticed a lot of birds and thought Linder might enjoy photographing them.

According to Linder, “It was like I was picked up out of Ashley County and dropped off in the Everglades.”

Overwhelmed by the number of birds she was seeing, Linder began snapping hundreds of photos, drawn in particular to a beautiful pink bird that was everywhere throughout the wetland. When she got home, Linder would go through the images, add her watermark, and share many of them in a Facebook group for Arkansas wildlife enthusiasts. Karen Rowe spotted the photos and reached out to Linder, “I didn’t think she knew what she had discovered.”

The pink birds Linder was seeing are not entirely new to Arkansas. They are spotted in the area every summer. Known as the Roseate Spoonbill, the bright pink wading bird is often confused with the flamingo due to its coloring, but the spoon-shaped beak gives it away as a different species. What was unusual, and what prompted Rowe to reach out to Linder, was that the roseate spoonbill isn’t usually seen in Arkansas until much later in the summer, after the breeding season is over.

Roseate spoonbills, along with several other wading birds, enjoy taking a summer vacation. Their winter homes and breeding areas are typically located south of Arkansas along the Gulf Coast of Louisiana, Texas and down into Mexico and Central America. The closest known breeding colony to Arkansas is in southern Louisiana. However, Rowe spotted some things in Linder’s photos that led her to believe she may have stumbled onto an undocumented breeding colony.

The pair met several times over the next few months to photograph birds and collect evidence that breeding was occurring in the area. They were able to document nests and view juvenile birds not only for the roseate spoonbill but for many, many birds including the white-faced ibis, another bird that had never had a breeding colony documented in Arkansas. According to Linder, “It’s a true rookery. I have never seen anything like it.”

The discovery was somewhat shocking to biologists as the birds have never been known to nest this far north. So why are the birds here? Rowe has a theory that when the birds came north to Arkansas following their breeding season (known as post-breeding dispersal) several years ago, they found an area they loved and decided to make it home. They still migrate south for the winter, but what used to be a “summer home” for the birds became a breeding colony, and they appear to be staying, forgoing a trip further north. Of course, loss of their original habitat and even climate change can factor into their decision to move further north.

Rowe credits the landowner, who has asked that the exact location of the rookery remain undisclosed, for “doing right as a conservationist” and creating a habitat that could support such a phenomenal find. The area is full of dense trees, swampland, and, most importantly, a source of food. All of these together make for the perfect habitat for a variety of wading birds. Roseate spoonbill and white-faced ibis both feed on shrimp in coastal regions and crawfish when they are further inland.

What’s Next for the Newly Discovered Rookery?

Linder continues to access the land and take photos of the roseate spoonbill, white-faced ibis and other birds in the area and post them to her photography Facebook page. Rowe has indicated that they are working with the landowner and will continue to occasionally monitor the bird species to see how long they stay and if they return in the spring. Rowe is hopeful that some of the areas surrounding the newly discovered rookery are also attracting these birds and others.

What to do if you find a rare bird, plant or animal on your land?

Many people are afraid if they find something exciting or a rare or unusual species, that Arkansas Game and Fish or some other organization will sweep in and take over your land. Rowe wants people to understand that is not the case. When AGFC reached out to Linder about the spoonbill discovery, everything was done with the landowner’s full permission. Private land will remain private land unless the homeowner chooses to do something differently. Usually, when an unusual species moves into an area, it is because the habitat is inviting, and something is being done right. The Commission has resources to help you maintain or even improve a habitat, so it remains viable to the plants and animals that live there.

Bruno is a bear on a mission. This summer, Bruno, who picked up the...

Camping is one of the best ways to connect with nature. Wake up with the...