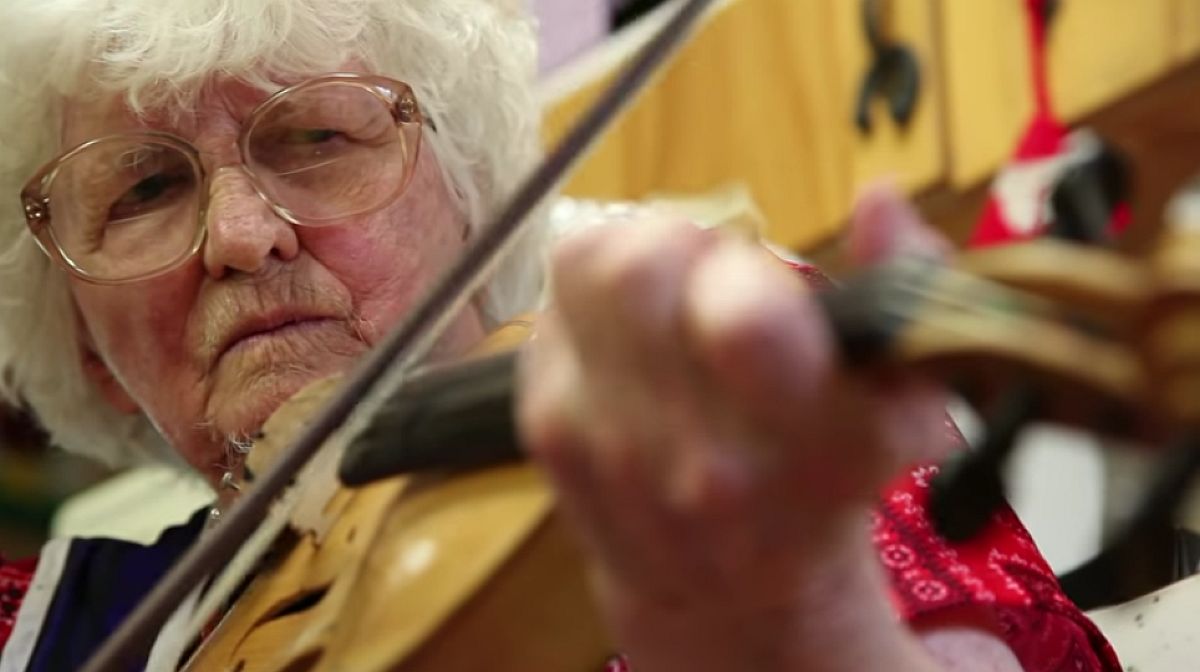 Arkansas has long been known for music icons like Johnny Cash, Levon Helm, and Jimmy Driftwood. But have you heard of Violet Hensley? She’s been recognized by the Arkansas Arts Council as an Arkansas Living Treasure, she’s been interviewed by Charles Kuralt (and many others), and she was a featured maker at Silver Dollar City for decades. So, maybe it’s time you got to know the lady they call the “Whittling Fiddler”.

Hensley was born near Mt. Ida, Arkansas on October 21, 1916, joining her family in the same two-bedroom log home where her father, George Washington Brumley, was born in 1874. Brumley made his first fiddle when he was just fourteen years old, and his little girl followed in his footsteps when she was fifteen.

“We had to make everything when we were growing up,” explained Hensley. “If we had cornbread, we grew the corn. If we had sorghum molasses, we grew the cane and made the molasses.”

What people today call “DIY”, was just how things got done when Violet Hensley was a child. If she wanted a fiddle, she simply had to make one herself. He taught her everything she needed to know about the varieties of wood available locally, then it was up to her to cut the pattern, dry the wood, and do all the planing and carving required to craft her instrument. Some of the tools she used were designed by her father as well.

Hensley’s fiddles are made from native woods found near her home in Yellville, where her family moved in 1968 after spending some years in Oregon working on fruit farms. Each instrument includes approximately 100 different woods, and she has a favorite wood for each individual part. For example, hardwoods like wild cherry and maple are favored for the back, sides, and neck of the fiddles, with softer woods like spruce and buckeye used for the top. Dogwood is used for the tailpiece and persimmon for the pegs. On her website, you can purchase an autobiography that includes a step-by-step guide to her methods.

Age is Just a Number

Over the decades since that first project, Hensley has built over 70 fiddles (she numbers each one), most of them in the years since she turned 44. The 27 or so year gap between fiddle number four and fiddle number five was caused by the birth of nine children. Seems raising babies and fiddle-making are hard to do at the same time. Hensley has estimated that each instrument requires approximately 260 hours, or two weeks of 8-hour days of work, stating “You make a five-gallon bucket full of shavings out of a fiddle.”

Violet Hensley’s opportunities to travel as a musician and craftsperson have been extensive, but began close to home. In 1962, at age 46, she was encouraged to enter the local Turkey Trot Talent Show in Yellville. Although she didn’t win (she came in second), it was there that she met Jimmy Driftwood. He invited her to play at his theater in Mountain View.

That experience led to two years demonstrating at the War Eagle Craft Show, and that’s where Silver Dollar City scouts found her. Hensley accepted their invitation to bring her fiddle-making and whittling skills to Branson, and since 1967, when she was fifty years old, she has been one of their most popular demonstrators and musicians. In the years to follow, Hensley appeared on shows such as the Art Linkletter Show, the Beverly Hillbillies, Captain Kangaroo and others to promote Silver Dollar City around the country.

In 2016, the Grand Ole Opry came calling when Hensley was 99 years old, and she returned in 2017 to commemorate her 100th birthday. One of the performers, well-known fiddler, Tim Crouch, described the performance as having left folks in attendance “with their jaws on the floor.”

In addition to the Arkansas Living Treasure designation she received in 2004, Violet Hensley has also been presented with the Living Treasure Award from Silver Dollar City and was inducted into its Hall of Fame. She was also inducted into the National Fiddler Hall of Fame in 2018, the same year she made her third appearance at the Grand Ole Opry. As Hensley says, “Once you’ve done something, [and] you like what you’ve done, why, you do it again.”

There is so much more to know about this Arkansas Icon, so take the time to visit these pages for more stories: State of the Ozarks, National Fiddler Hall of Fame, Bittersweet and Ozarks Alive. Or, watch this 12-minute video titled “74 Fiddles” created by the Arkansas Arts Council and the Historic Arkansas Museum. And remember, whatever your passion might be, it’s never too late to try.

Photos used in this story are courtesy the Arkansas Arts Council, Encyclopedia of Arkansas, Historic Arkansas Museum and Bittersweet.

For those of us who love a good treasure hunt, the increasing number of...

Going to the movies is high on the list of favorite things to do for...