Hampton Springs Cemetery and the Myth of the Tree Surgeon 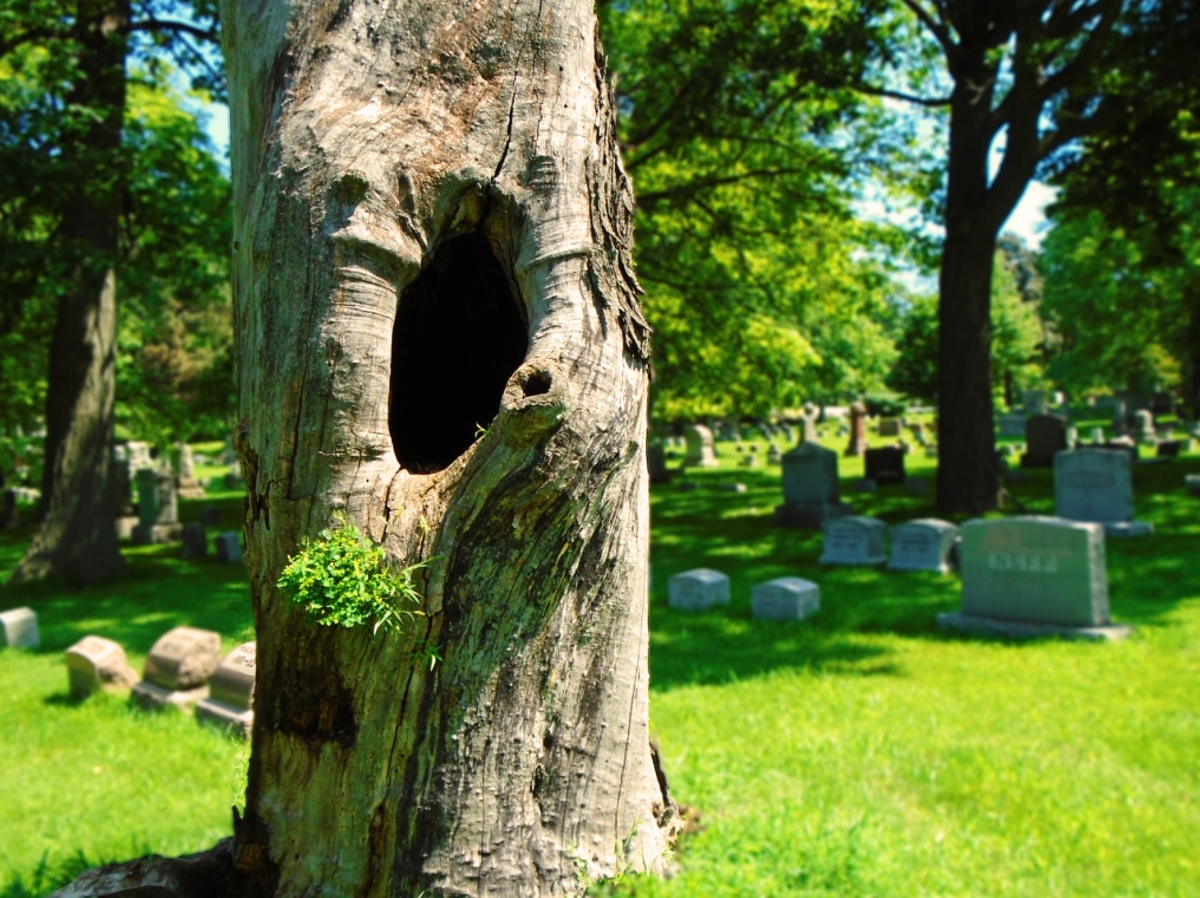 Four miles outside of Carthage, Arkansas, at a junction of Dallas County roads, the Hampton Springs Cemetery keeps secrets. All cemeteries quietly bear the signs of lives lived and gone, either with well-maintained headstones or crumbling markers. At this time of year, when the wind rattles the leaves from trees, nights grow longer, and the dead seem closer to the living, a myth that a tree surgeon is buried inside a tree in the cemetery seems conceivable. But is there any truth to this Arkansas ghost story?

Tree surgeons repair a hollow tree at the Capitol in 1925. Photo: Library of Congress

Carthage is a small town in Dallas County founded, like many Arkansas towns, around the railroad. The Little Rock and Southern Railroad began building a rail line from Haskell to El Dorado in 1902. The railroad was purchased by the Chicago, Rock Island and Southern Railroad in 1905. Before the coming of the lines, Dallas County was an agricultural center. It traditionally had many large plantations worked by slaves. After the Civil War, the plantations shifted from owning slaves to employing tenant farmers. Lea Ridge was an African-American community formed by many of the tenant farmers. When the railroad line came in, the community shifted its location to be near the railroad and renamed their city Carthage, after the famous African city. Carthage has maintained a large African-American population to this day.

The railroads relied on the timber industry to build their tracks. This industry thrived in Dallas County. The wood was used to lay track, but residents also used the timber to build the new town, including the Bank of Carthage, which is on the National Register of Historic Places and was included in Preserve Arkansas’s 2020 list of most endangered historic places. Timber continues to be important to Carthage today, where Idaho Timber sawmill is one of the area’s largest employers.

The Bank of Carthage, now endangered and in disrepair, was built by local timber harvested by the railroad.
Photo: Wikipedia

What does Carthage’s history have to do with the myth of a tree surgeon buried in a tree? Tree surgeons prune, cut and remove trees and bushes. They’re trained in diagnosing diseases in trees, and the work can be dangerous since it often involves felling a tree. The science of tree surgery is credited to John Davey, who founded the Davey Tree Expert Company in Kent, Ohio, in 1880. In 1901, he published “The Tree Doctor,” a comprehensive guide to tree care. Davey’s book became the backbone of the arborist industry. He scientifically outlined how to save and care for trees. Davey also founded the Davey Institute of Tree Surgery school in 1909 to train tree surgeons.

The tree that is rumored to be the grave of a tree surgeon sits at the Hampton Springs Cemetery entrance, roughly 4 miles from Carthage. The base of the tree has been bricked up, sealing the supposed tree surgeon inside the hollow base, according to local legend. A name and date were written on the bricks, fueling the theory that the tree was a grave. An intrepid traveler pursued this myth in 2006 and was able to track down someone knowledgeable about the tree. He posted on Roadside America that a Mrs. Bradley’s parents had become concerned about the tree. “The tree had become diseased and was starting to rot away. Her parents scraped out the rotted part and filled it with concrete to try and keep the tree from falling and damaging tombstones.”

This tree, though not the tree in question at Hampton Springs Cemetery, is similar to the hollow tree rumored to contain the tree surgeon.

In fact, this technique is called cavity filling, and John Davey outlined it in his book. Is it possible the concerned citizens in Carthage had read Davey’s book and then used his method of filling a hollowed-out tree in an attempt to save it? Davey’s theory was that once the cavity was filled with a stronger substance, the tree would grow around the cavity, essentially healing the tree. Although the tree in question at Hampton Springs Cemetery still reveals some of the cement inside it, it has grown over the brickwork, obscuring the name and date scratched into it. The likely conclusion is that the tree isn’t a grave and that concerned citizens simply wanted to save the tree using the best practice at the time.

Although the Hampton Springs Cemetery may not hold a tree surgeon in a tree, it does have other unique gravesites. The cemetery is divided into two sides, an African-American and a white side, a common practice at the time. The African-American gravesites reflect a blending of African and American traditions. Though some have traditional concrete markers, other graves are marked with oil lamps, wooden stakes or petrified wood, mussel shells, glass jars, bottles and pitchers. In some African traditions, objects like these were placed on graves to prevent spirits from wandering. The objects often had to do with water, like the mussel shells and pitchers, and were often broken to release the spirits inside to join with the dead. The African American side of the Hampton Springs Cemetery was added to the National Register of Historic Places in 1983 and identified as the only cemetery in Arkansas to display traditional African practices.

This photo by Doris Ulmann captures the practice of some African American cemeteries in the south, though this grave is not located in Hampton Springs Cemetery. Photo: Library of Congress

This is the time of year for ghost stories, and the roots of the story of a tree surgeon entombed in a tree seem to be just that, a story designed to induce shivers. If you want to take a drive to see the tree, head east of Carthage for 3.5 miles on Highway 48, then take country road 426 south for a quarter mile. Turn left on 427, which will bring you to Hampton Springs Cemetery. Whether you visit the tree at the entrance or the other gravesites, remember you’re stepping into a sacred space that the citizens of Carthage have tended for over a hundred years. Though the dead there can’t speak, the objects left behind still remind us of their lives, and the tree that graces the entryway stands as a guardian to their graves.