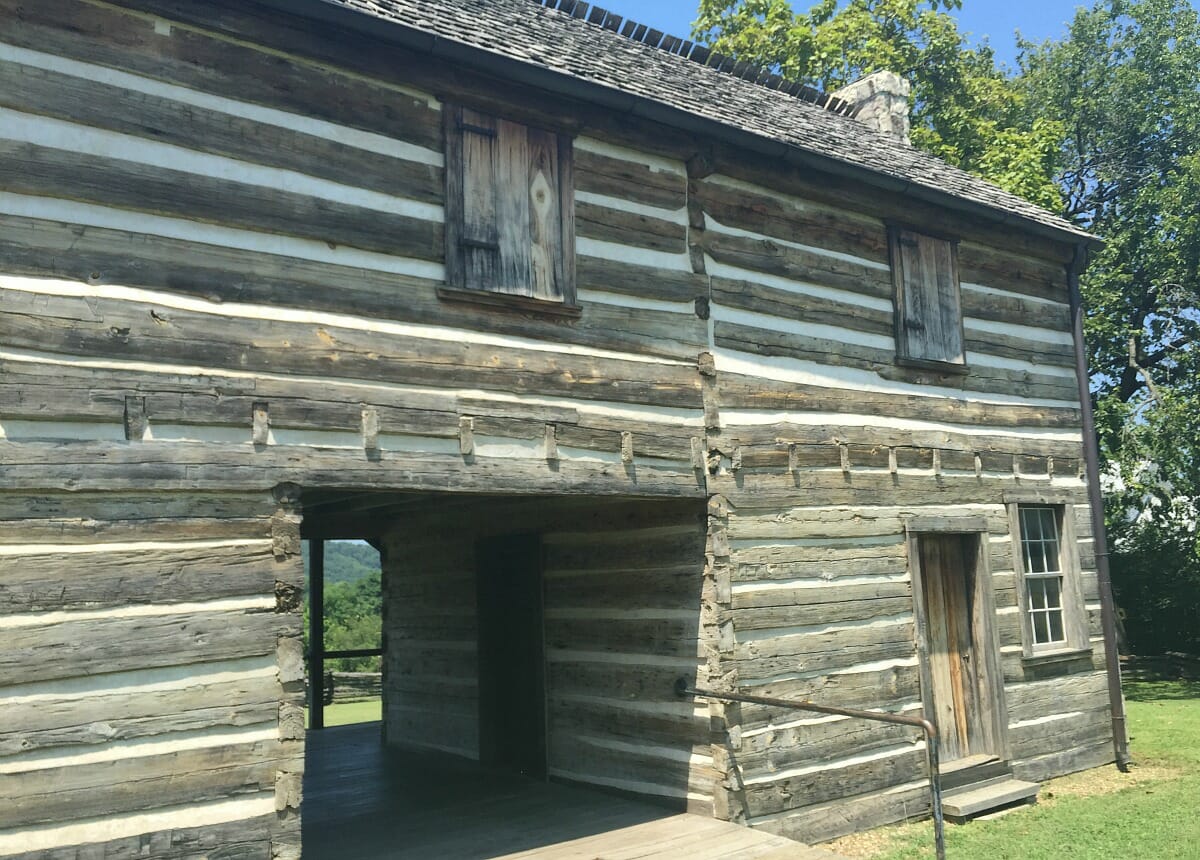 While driving the scenic routes through Arkansas, it isn’t unusual to come upon an old log cabin or farmhouse. Some have been designated as historical properties. Mother Earth has nearly reclaimed others. These old structures are part of Arkansas history, so I often pull to the side of the road and take pictures.

The Jacob Wolf House, located in Baxter County between Norfork and Mountain Home, is the oldest public structure in Arkansas. I’ve known about this old log house for as far back as I can remember. Since I was a child, my family has spent summers exploring the surrounding Ozarks. Today, while many of the landmarks of my childhood are gone, the Jacob Wolf House is a constant. And there’s something to be said for that.

It had been decades since I’d visited the old log house. My only memory involved the stifling summer heat and my pre-teen bratty annoyance of time spent away from the lake. Last summer, my older and wiser self stopped to visit it once more. I’m so glad I did. I’d forgotten (or never knew) the story of the man and the historically significant home he left behind.

In the early 1820s, Jacob Wolf, of Pennsylvania German background, followed other family members to the Arkansas Territory. According to 1825 land patent records, he purchased approximately 76 acres of government land near the junction of the North Fork and White Rivers. Wolf built a trading post at the mouth of the North Fork River and began trading with nearby Shawnee and Delaware Indians. He also operated ferries on both rivers.

That same year, the territorial government split off a portion of Independence County to form Izard County. Izard County served as a gateway to northern Arkansas and southeast Missouri, areas rich in timber and popular with fur traders. Goods came from New Orleans by flatboat up the White River. Wolf’s settlement, which he named Liberty, became a well-known spot in the area.

In 1826, when Wolf was elected as a representative to the General Assembly of Arkansas Territories, he successfully presented legislation to move the county courthouse to Liberty and even donated land for the construction of the courthouse. The building, constructed in 1829, became known as the Jacob Wolf House.

The Jacob Wolf House, a two-story, dogtrot-style house, was built on a bluff overlooking the White River. The perfectly dovetailed yellow pine logs, hewn from trees on-site, helped attribute to the house’s well-preserved exterior and overall endurance. The few nails used during construction were square cut. Brick fireplaces are original. Note the unique roofline in the picture below. In keeping with typical 19th-century construction, shingles were extended over the edge of the roof on the side of prevailing winds. This “turkey ridge” style roofline carried wind and rain over the house and helped keep the structure dry.

Wolf lived in the house with his young bride from Kentucky. A lower level space served as the County Clerk’s office. A second floor room above the dogtrot breezeway served as the county courthouse. According to historical records, judges and lawyers traveled great distances to appear at regularly scheduled Izard County courthouse sessions. When court was assembled, the grounds took on a carnival like atmosphere with folks camping, socializing and participating in games. An interesting tidbit: the first County Clerk of Izard County was John P. Houston (brother of legendary Sam Houston).

Over the next few years, the town of Liberty (present day Norfork) grew to include a blacksmith shop, tavern, saw and gristmill, and general store. However, when Arkansas gained statehood in 1830, the county seat was relocated to Athens. Wolf’s original land and building were deeded back to him.

During the course of his life, Wolf married three times, fathered 16 children and had five stepchildren, many of whom lived in this house. After his death in 1863, the home passed to a son but was eventually sold to a non-relative. After being used as a general store during the railroad heyday and a duplex after World War I, area citizens began to appreciate the significance of the property. A public group purchased and began tending to the home in the 1930s.

In more recent times, The Jacob Wolf House has undergone several restorations including a 1960s renovation spearheaded by Gerald L. K. Smith, on behalf of the Elna M. Smith Foundation. Smith was creator of the Christ statue in Eureka Springs. In 1973, the property was Baxter County’s first site added to the National Register of Historic Places. The final restoration, completed in 2002 by the Arkansas Historic Preservation Program, returned the Jacob Wolf House to its early courthouse appearance.

Today the property is owned by Baxter County, and includes not only the renovated Jacob Wolf House, but also the blacksmith shop and the cabin built by Jacob’s brother, John Wolf. Although the buildings are not open to the public, the grounds, markers, and the sweeping view of White River are well worth a stop for those interested in early Arkansas history.