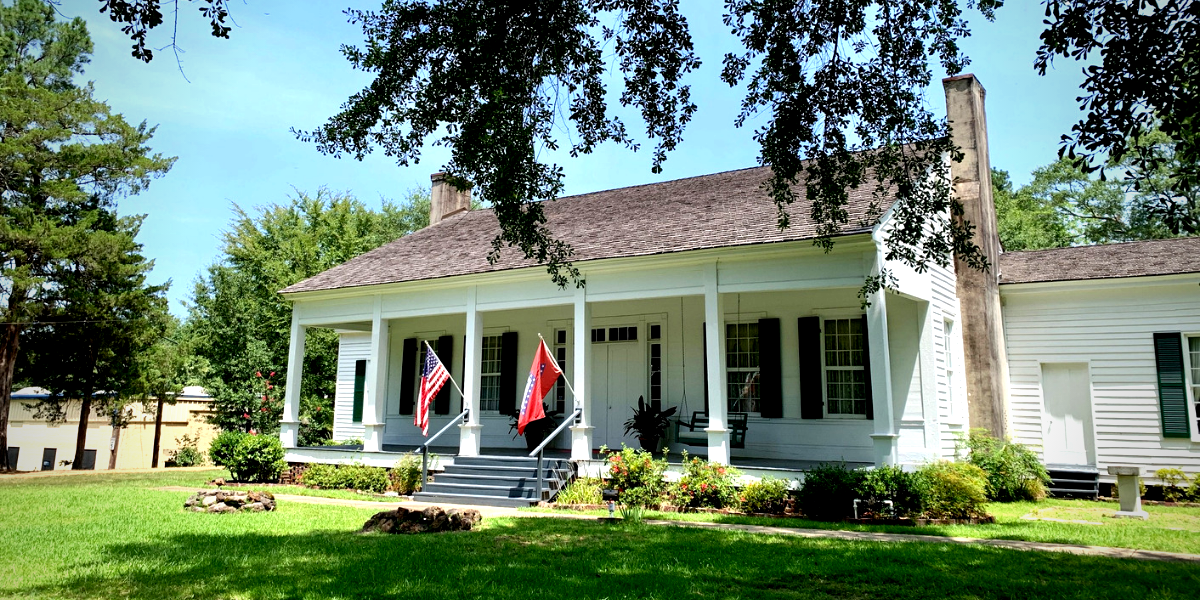 The south-central Arkansas town of Camden comes with a varied and often accidental history. First popular in the 1800s as a French trading post, its close proximity to the Ouachita River and steamboat activity resulted in it becoming known as the “Queen City.” Later, it became the center of the Red River Civil War campaign.

Today, Camden is widely known for its Civil War-era homes along the main streets that form the town and the war stories that accompany them.

The McCollum-Chidester Museum, a must-visit experience in south Arkansas, stands at the corridor on the edge of town beginning the historic Washington Street District. Ouachita County Historical Society operates the museum, which serves as a signature for the southern part of the state.

The museum properties are currently open for tours to small family groups wearing masks. Calling ahead for reservations or availability is recommended.

The McCollum-Chidester, an 1840s example of a Southern Civil War-era home, is named for two significant families:

Peter McCollum built the first planed lumber home in the Ouachita County area in 1847 and later boasted the first plastered walls, wallpaper and carpet. He was a North Carolina resident who headed west to the bustling town of Camden, the second-largest city in Arkansas at the time. McCollum came to explore the cotton industry that was growing and to be part of something new in this thriving riverboat community. He brought in materials from New Orleans, and many of the wooden details and features of the home arrived on a steamboat from New Orleans with origins throughout Europe.

The second owner of the home was John Chidester from Tecumseh, Alabama. Chidester bought the house for $10,000 in gold since McCollum would not accept any confederate money. Chidester owned the stagecoach line and was looking to expand it farther west with Camden being his headquarters. He bought a governmental mail contract with the Postal Service that afforded his family continued work and income during the hard years of the Civil War. John Chidester’s family resided in the home for up to four generations before donating the property to the county’s historical society.

Union troops and officers occupied the home during the 1864 Camden Expedition of the Red River Civil War Campaign. Brigadier General Frederick Steel is presumed to have spent at least one night in the house and potentially Major General Sterling Price, as well. It was not typical for the officers to stay multiple nights in the same home for fear of being captured. But it was presumed by the troops that this home would be significant for gathering information since they were so closely connected to mail and information exchange.

Anticipating this, and accused of being a spy for the Confederacy, Mr. Chidester left for Texas after being sought by soldiers. Gunshot holes can be found in the wall of the trunk room on the second floor in an empty wall space where they thought he might be hiding. Unlike other locations, the troops did not destroy any property during their visit, and the family resided at the same address for four generations.

Because of the longevity of one family in the home, many of the original pieces of furniture, china, personal effects like clothing, dolls and blankets were all kept together as part of the estate.

Paranormal groups have come to the home seeking friendly spirits. While they have detected some activity, the “guests” they find all seem to be friendly and likely related to the Chidester family.

The house was used for the 1985 TV miniseries on ABC, “North and South,” based on the John Jakes novels and starring Patrick Swayze and Kirstie Alley. The main dining room/parlor had false walls added to transform it into a West Point classroom.

Also on the McCollum-Chidester Museum tour:

The Ouachita County Historical Society acquired the home from the Chidester Family in 1963 and has continuously worked to improve and restore the house to its original state. Restorations include the upkeep of the floors, establishing room setups with the original family heirlooms, replication of wallpaper and window trimmings, and digging in deeper to the families that once called these walls home.

Of course, a trip to the McCollum-Chidester Museum is not complete without a family picture on the lawn with the Civil War cannon.

Hot Springs National Park is celebrating its 100th year with a full...

One look at Alda's Magnolia Hill, and you know you have stepped into a...