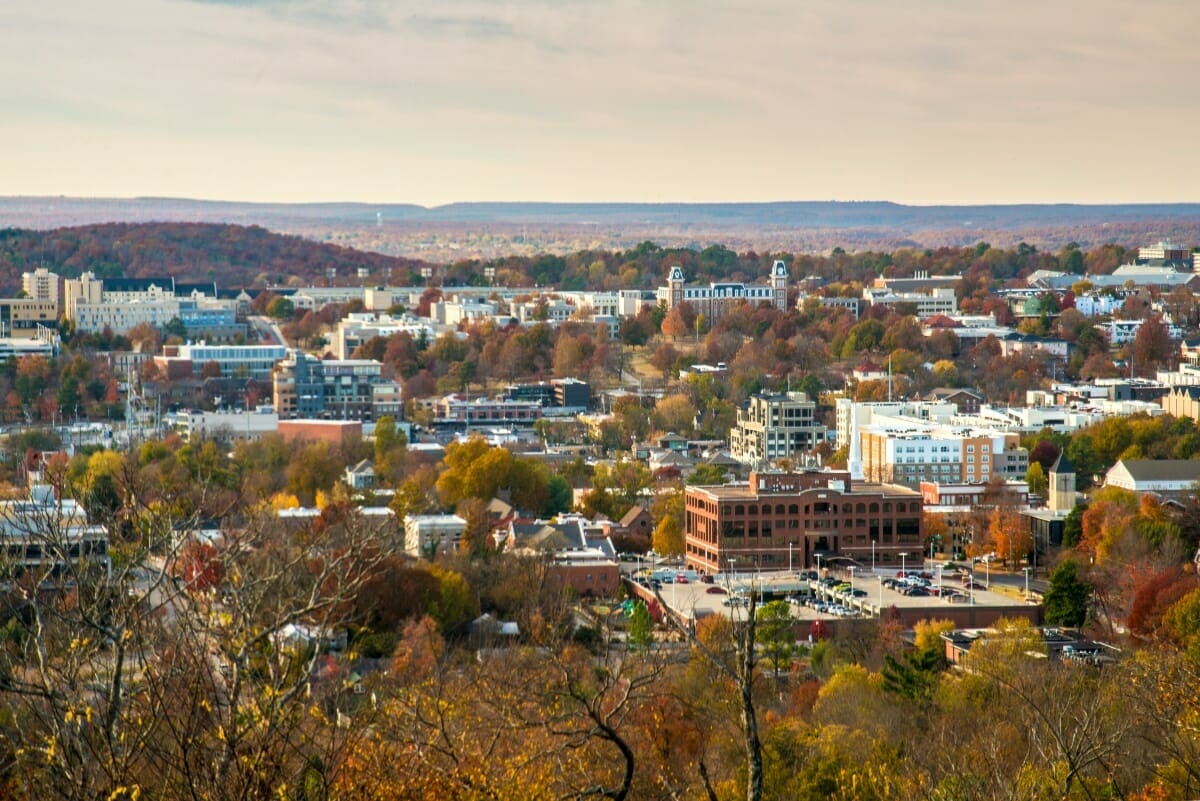 Mount Sequoyah has its roots in the Methodist Church. Over 100 years ago, the group wanted to create a conference and retreat center west of the Mississippi River. It already had one center in North Carolina on Lake Junaluska. The church considered many applications from cities and states west of the Mississippi, but the city of Fayetteville ultimately won over the others with an offer of 400 acres, $35,000 in seed money, access to city utilities, and the promise of a new road to the top of the mountain. In 1922, the organization broke ground on the new retreat center.

During its first few years of existence, Mt. Sequoyah was actively being shaped by building projects. Parker Hall (formerly called the Epworth Building) is a two-story rock and brick building that began in 1924. Its purpose was to house young adults attending youth summer camps. Fifteen upstairs rooms built dormitory-style housed the teenagers while the downstairs included classrooms and a kitchen. The acreage also held a swimming hole and a golf course at one time, though they’re no longer in existence.

In 1927, the Women’s Missionary Society broke ground on a four-story building now called Sequoyah Hall. The society housed young women here while they trained and studied for missions or provided rooms for when the missionaries needed a place of retreat. The group ran the building until the late 1950s or early 1960s. It was then given to the Methodist retreat center. Other buildings added to the center’s ability to host summer camps, conferences, weddings, and more. The famous cross that sits on the edge of Mount Sequoyah was built in 1938 and has provided a meeting point and lookout for many visitors and locals alike.

The name of Mount Sequoyah Center was originally the Western Methodist Assembly, but a naming contest was held for something more original. Mrs. A.C. Millar, the wife of the chairman of the board for the center, submitted the name Mount Sequoyah. She wanted to honor Sequoyah, the inventor of the Cherokee syllabary, which allowed the Cherokee to read and write in their own language. Sequoyah lived and worked in Arkansas for a time, and when the Cherokee were forcibly removed from Georgia in 1838, they passed through Northwest Arkansas on the Trail of Tears. The name was approved and has graced the mountain ever since.

Buses arrive at Mount Sequoyah during the first decade of the retreat center’s existence.

A New Face In A Familiar Place

In 2016, the Methodist Church decided to gift the property to the board of trustees. Mount Sequoyah shifted from a part of the church to a separate and independent non-profit organization. Although the center is no longer associated with the church, they recognize the roots of community gatherings and retreats that made Mount Sequoyah an important part of the community. Now Mount Sequoyah is continuing its historic role as a conference and retreat center, but with a greater ability to reach out to everyone in the community.

In January of 2020, Emily Gentry took on the role of executive director. She has dug into the history of the center, reading back through pages and pages of minutes from old board meetings. She also brings a new vision to a historical place. “My vision for the center is that it is seen as more of a community center for all of Northwest Arkansas. I don’t want our organization to feel out of reach to anyone, and we want to consistently offer a variety of programs and events that are attractive and accessible to as many people as possible.”

In fulfillment of that vision, Mount Sequoyah now offers a wide variety of programming in addition to its ability to host gatherings of all types on its property. Creative Spaces supports artist residencies, studios and community arts programs. The tennis courts are available for private lessons and public use, and the swimming pool offers a swim team and swimming lessons during summer. Camp Sequoyah still honors one of the center’s original programs by offering a fun and safe camp program for children from ages 5 to 12. The center also offers a range of wedding packages as well. In 2003, Mount Sequoyah sold 100 acres of its property to the city of Fayetteville to be preserved as the Mount Sequoyah Woods Trail.

The Playground Director at Mount Sequoyah during the 1920s.

The Mount Sequoyah Conference and Retreat Center is 100 years old this year. It opened for its first season of activity in 1923. Executive Director Emily Gentry has been hard at work putting together a series of events to commemorate and celebrate the center’s role in the community.

Gentry is excited about what Mount Sequoyah has planned. “The 100-year celebration means several things to me. First, it is a big celebration for our organization not only for making it to this milestone but of all that we had to work through to make it here. We made it through a potentially rocky transition into an independent non-profit, and we have survived through much of the Covid crisis thanks to the resiliency of our board and staff and the support of our community and donors.”

As Mount Sequoyah celebrates in 2022 and 2023, it promises something for everyone in the community to enjoy. Gentry says, “It is truly a celebration getting here. The 100-year celebration also marks a bit of a beginning to a new chapter. We are a secular, education and arts-focused non-profit, and we want people to enjoy the grounds, come to events, engage with art, and participate in programs with us. As Mount Sequoyah continues to transition away from being a church-owned facility, we are still learning all that means for our organization, what we offer, and what that will look like for the next 100 years.”