The Old Mill: An Arkansas Treasure 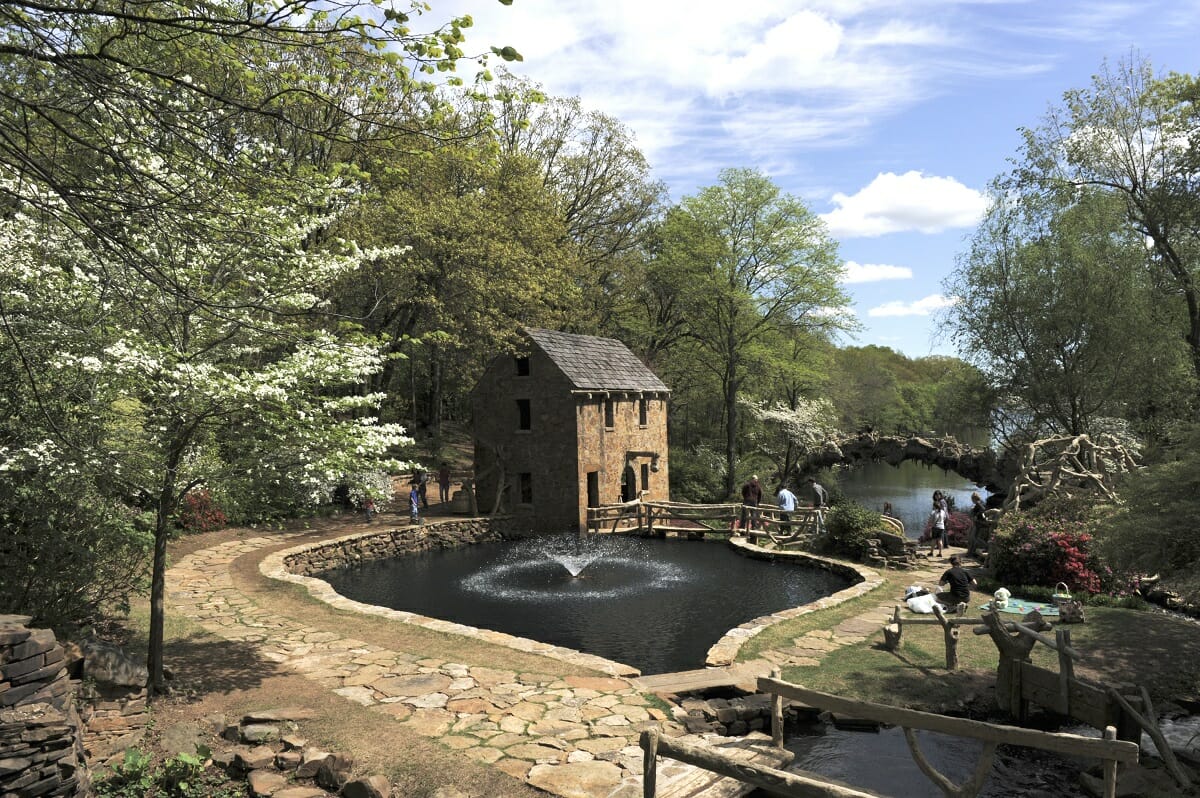 The Old Mill is one of Arkansas’ most well-known symbols, a beautiful landmark in the deep south. She’s been featured in magazines, newspapers, and the opening credits of Gone with the Wind. But for most Arkansans, and especially North Little Rock residents, the Old Mill is an incredibly personal destination. Lakewood homeowners picnic by the lake, take their evening strolls through the grounds, and pose for family portraits and prom pictures by the water wheel and blooming flower beds.  I was lucky enough to be one of those residents for several years. I lived just a few streets over from the Old Mill, and every evening after work my dog Mabel and I would circle the lakes and pass by the beautiful reproduction mill.

The history of the Old Mill is an interesting one. It gives visitors the impression that it’s been there for hundreds of years. However, construction on the mill began in 1931, making it a “spring chicken” of sorts when filmed for the opening credits of Gone with the Wind. The mill was the brainchild of Justin Matthews, the developer of the Lakewood neighborhood. Matthews, a successful cottonseed oil businessman, helped create and transform North Little Rock with the development of the Lakewood area, as well as the Park Hill subdivision.

The Old Mill was designed to appear to be an ancient grist mill. Windows and doors were purposely excluded from construction to give visitors the impression of an abandoned building. But while the construction was brand new in the early 1930’s, many salvaged historical pieces were used throughout the structure. Parts of the first floor date back to 1828, mill rocks on the second floor came from a plantation, and three sections of a wrought iron shaft originated from the wheel of a steamboat circa the 1800s.

Matthew’s architect, Frank Carmean, sought out the famed Mexican artist Dionicio Rodriguez to add fantastical details to the grounds of the Old Mill. Rodriguez, born in Toluca, Mexico, grew up working as a bricklayer with his family. He went on to become a naturalistic artist, using cement to sculpt and create fanciful natural commissions across the United States. Matthews and Carmean must have known that Rodriguez would give the grounds of the Old Mill an “otherworldly” artistic feel that would set it apart. Rodriguez did not disappoint. He added details using concrete that looked like wood, iron and stone.

The official website for the Old Mill mentions that Rodriguez was so precise in his work and so focused on his storytelling sculptures, that he made up stories about them. One such unwritten “legend story” tells us of a woodsman.

“A black locust tree grew in the soft earth of the bank of the little stream. When it reached a certain height, it was blown down but continue to live. A woodsman who wanted to use the trunk of the tree as a footbridge cut off the limbs…”

Visitors can still visit his creations; a twisted black locust footbridge, a persimmon tree bridge, a wagon bridge, toadstools, fallen tree branches, and more (he also designed sculptures in the nearby Lakewood Park). Rodriguez was said to be so secretive about his work that he did his work in the trunk of his car and would slam it shut when passersby got too close.

It is still unknown how or why David Selznick chose to include the Old Mill in the opening credits of Gone with the Wind, but what we do know for sure is the Old Mill’s fame and popularity has only grown over the years. It plays host to over 200 weddings and 10,000 visitors per year. To find out more about this Arkansas landmark, or to attend one of their guided tours, visit their website or call (501) 791-8537.

And as a former Lakewood resident, I can thank the Old Mill for one of my most magical memories. I remember standing on Rodriguez’s fanciful footbridge over the lake, as the sun was rising, the swans were swimming below, and I looked at the Old Mill. I realize that right there, a few streets over from my home, was the last standing structure from the movie Gone with the Wind. I’m still in awe of that moment. It’s memories like that, and landmarks like the Old Mill, that make being an Arkansan so incredibly special.

3 responses to “The Old Mill: An Arkansas Treasure”