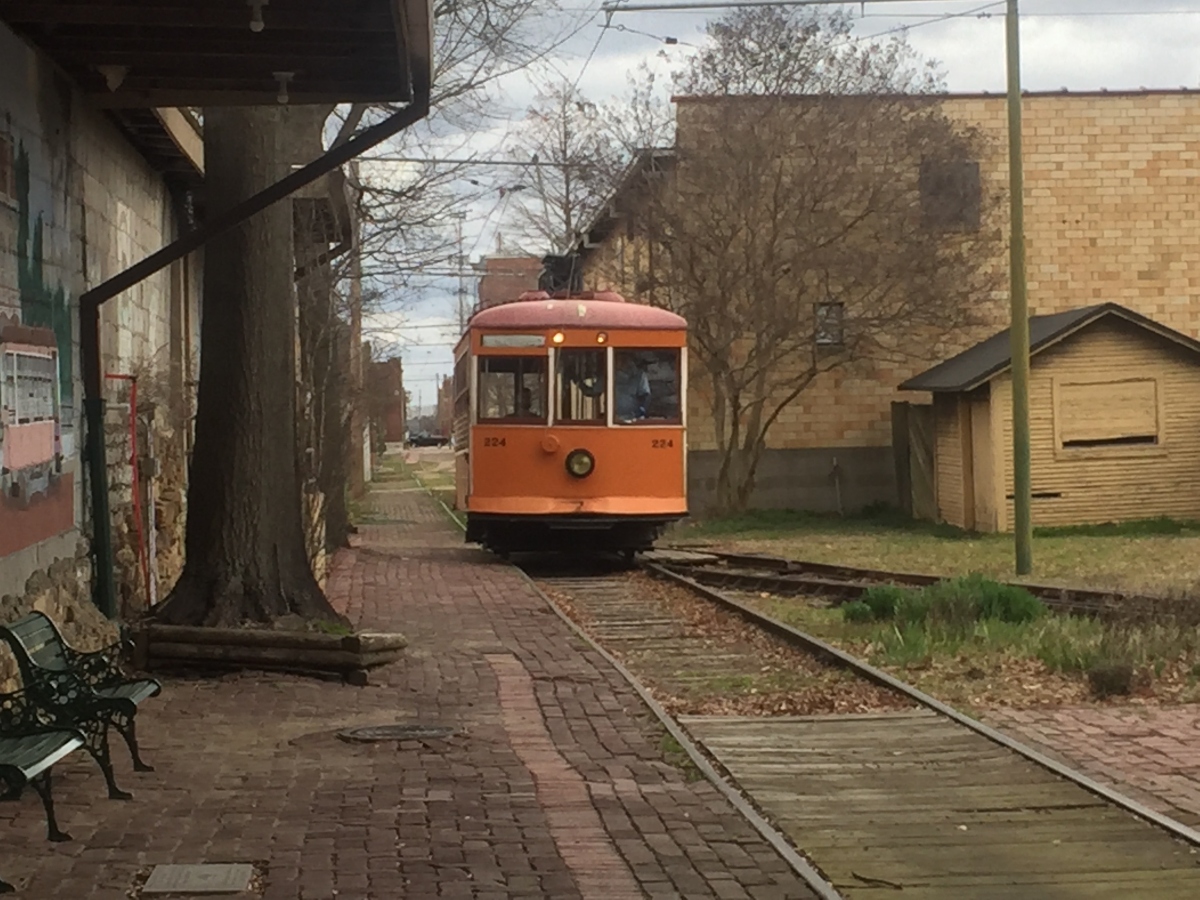 Once, between the age of horse-drawn carts and cars, trolleys ruled the streets in many larger towns and even some smaller ones. In Arkansas, trolleys carried passengers through the busy downtown streets of Fort Smith and Little Rock. Though trolleys were phased out in favor of other forms of transportation, today visitors to both cities can experience riding a streetcar.

Mule-drawn trolleys began operating in Fort Smith in 1883. In the beginning, three cars moved through the streets, each with the ability to carry 14 to 16 passengers. Within 10 years, electric trolleys began to overtake the mule-drawn cars and, in 1899, Fort Smith boasted all-electric streetcars with roofs, allowing riders to ride in poorer weather. Fully enclosed streetcars didn’t come into use until 1911. These cars also had heaters under the seats to keep passengers warm in cold and wet weather. As the city moved into the 20th century, the trolley hit its heyday. Riders could go to Electric Park and ride the roller coaster and other amusement park rides. A trolley line ran out to a ballpark in Arkoma for Sunday baseball games that were prohibited in Arkansas. When the line to the ballpark opened, an estimated 10,000 people used the trolley line that day.

The 1920s brought several difficulties for Fort Smith Light & Traction Company, who operated the trolleys. As automobiles increased and ridership declined, the company fell into legal disputes and the Great Depression soon spelled the end of the trolley era in Fort Smith. The last streetcar made its run in November 1933. The streetcars were scrapped and sold off and it seemed the era of electric streetcars was over for the city. Then, in 1978, the “Journal of the Fort Smith Historical Society” published an article over the streetcar system. Doctor Art Martin had suggested it to the co-editor of the publication, who was also his wife, Amelia Martin.

During the research for the article, the couple learned of two Fort Smith citizens devoted to collecting information and photos of the streetcars, Charles Winters and Fred Krock. The men proved immensely helpful, as Charles Winters had already written a history of the Fort Smith streetcar system as part of his graduate work at the University of Missouri at Kansas City. At the same time as publication, the group learned of a former Fort Smith street car for sale in Shreveport, Louisiana.

A committee formed with the idea of buying the streetcar and reviving the lost mode of transportation to the city. They were able to purchase the car and soon the Fort Smith Trolley Restoration Committee located other former Fort Smith trolleys. In 1991, the first trolley was ready to go. The Committee had expanded into the Fort Smith Trolley Museum, a non-profit organization dedicated to restoring and preserving Fort Smith’s streetcar history and giving visitors the experience of riding in a restored trolley.

The current trolley line trundles along track that passes the Fort Smith National Cemetery and the Fort Smith Museum of History, as well as the Garrison Avenue Historic District. Though the round trip ride is only a mile and a half, the restored streetcar and the hiss of the brakes gives visitors a glimpse into what life was like for so many Arkansans in the early 20th century that daily relied on trolleys.

Visitors can find out more about a visit at fstm.org. The museum isn’t so much a collection of documents in a building as it is a grounds for holding the trolley cars and locomotives as well. After riding the trolley, visitors can visit the storage barn and view the other streetcars being repaired or admire the collection of train cars. You’re also certain to see the trolley cats, a large collection of cats on the premises that current museum president Bradley Martin holds dear. The trolley cats are so popular they had their own 2019 Trolley Cat calendar. The Fort Smith Trolley Museum also holds events for the public, from ice cream socials to a Polar Express day. Keep up with their calendar on the Facebook page.

Though the company running Little Rock’s streetcars would change names several more times, the cars themselves continued to run through the early part of the 20th century. In 1924, the new Main Street Bridge linked the trolley system in Little Rock to the system in North Little Rock. Rides cost an average of six cents and serviced many parts of the city. The line to Pulaski heights was so steep, it had to contain switchbacks and took 30 minutes to ride to the end. The South Main line carried passengers in a loop from the Missouri Pacific Railroad Station around 25 city blocks. In 1911, the trolley system had nearly 11 million fare-paying customers. Of course, the streetcars faced the same challenge as all trolley lines across the nation faced as automobiles took over. Many lines were shortened or ceased completely in the 1930s. The last trolley run in Little Rock took place on Christmas Day of 1947.

In 2004, amid a growing interest nationwide to reestablish streetcars as part of the movement to revitalize downtowns, the River Rail Streetcar began a single route run between Little Rock and North Little Rock, across Main Street Bridge. The Central Arkansas Transit Authority runs the system, which began with three vintage replica trolley cars. Now called the METRO Streetcar, the current route is 3.4 miles long and links the historic Argenta district in North Little Rock to the beautiful Little Rock River Market and downtown area, as well as the Clinton Presidential Library. The streetcars operate seven days a week and are a fun way to see downtown Little Rock and North Little Rock. Visit metro.org for schedules and more information.

Though several other cities in Arkansas offer “trolley tours,” true trolley cars run on electricity powered by an overhead wire and need a track, so unless your trolley tour is mule or horse-drawn, the best way to experience a trolley in Arkansas is a visit to the Fort Smith Trolley Museum or the Little Rock Metro.

0
0
From J.R. Cash to The Man in Black: Arkansan Johnny Cash
Kimberly Mitchell

In country music, not many musicians have left such an impression on the...

Arkansas has some wineries to rival any in the country or around the...

One response to “Trolleys in Arkansas”