Breathe It In Salt Rooms – Visit a Salt Cave in Arkansas

I love writing about Arkansas-made products. It is an opportunity to not... 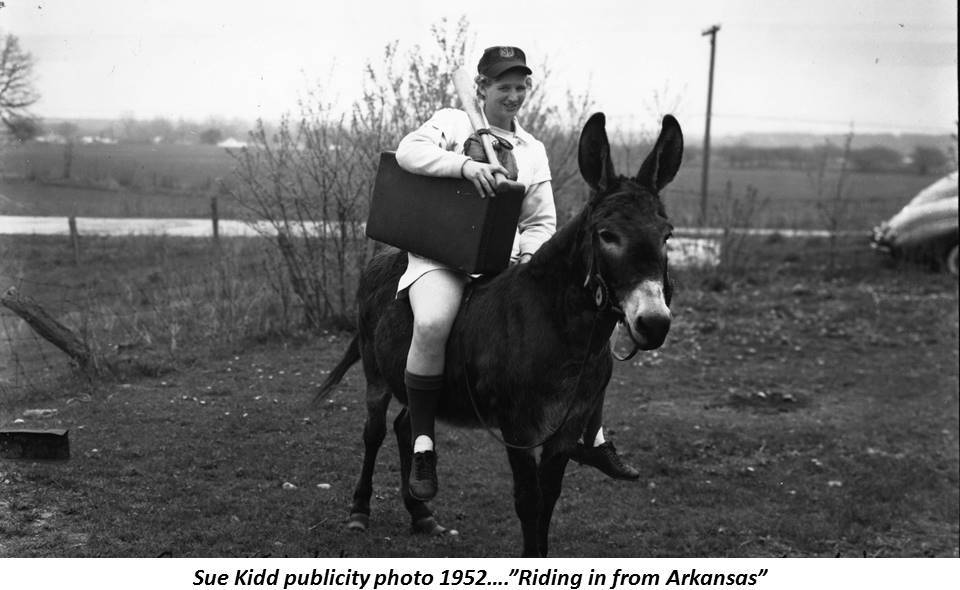 One of the most popular movies in the summer of 1992 was a comedy/drama about baseball. Although there have been dozens of memorable baseball movies, A League of Their Own was not the usual period film about a well-known major league hero. The classic baseball movie fictionalized the All American Girls Professional Baseball League, which existed for a dozen seasons from 1943 until 1954. Among the stars of the league was a school girl from Van Buren County, Arkansas.

Dr. Earl Williams of Greenbrier, Arkansas, was the most respected individual in Arkansas baseball circles in 1949. He had recommended scores of young country boys to professional baseball scouts over the previous 30 years, and if he said the player was a professional baseball prospect, baseball men listened. When he heard about professional baseball teams playing exhibition games in Little Rock over the coming week, he immediately contacted Choctaw postmaster, Marvin Kidd. Williams was sure one of Marvin’s children was a special baseball talent, and this was Mr. Kidd’s best chance to get the youngster to a tryout. Marvin Kidd Jr. was a good player, as was younger son, Tommy, but there were many good baseball players around the area. Marvin Kidd’s daughter, Glenna Sue, was exceptional.

On Tuesday, June 21 and Wednesday, June 22, Little Rock’s Travelers Field would be the site of an exhibition between the Chicago Colleens and the Springfield Sallies, two traveling developmental teams from the All-American Girls Professional Baseball League (AAGPBL). Based on Dr. Williams’ good word, 15-year-old Sue Kidd not only got her tryout, but was signed to a contract by the Sallies and actually pitched an inning in the Wednesday night game.

After assurances that Sue would be properly supervised, the Kidd family rushed home to Choctaw, packed her bags, and drove the wide-eyed teenager back to Little Rook to catch the Sallies’ bus out of town.

Glenna Sue Kidd was born on September 2, 1933, the youngest daughter in a family of three boys and three girls. Closer in age to her brothers, Sue followed the boys to their baseball games and practices and even played a few innings against male competition for the Choctaw town team coached by her father. A quiet, shy teen, she was an outstanding athlete at nearby Clinton High School, but in the remote rural area where she grew up, Sue Kidd had no concept of the existence of professional girl’s baseball.

The Springfield Sallies and Chicago Colleens could be generally described as the “minor league” of professional women’s baseball. The two teams signed new players regularly as they traveled around the country playing each other. Sue Kidd’s record for the remainder of 1949 is not part of the official statistics of the All-American Girls Professional Baseball League, but she remained with the Sallies throughout the tour. Newspaper accounts document several outstanding games Sue pitched for the Sallies later in the summer, including a no-hitter in August at a tour stop in Montgomery, Alabama.

In 1950, Kidd was promoted to the regular AAGPBL, but struggled mightily in a year that saw her play for four different teams. Still just 16-years-old, Kidd posted a dismal 1 win, 10 loss, record, in a season that saw her dominated by older, more experienced players.

The 1951 season would be very different for the 17-year-old Arkansas farm girl. Kidd had ended the 1950 season as property of the South Bend Blue Sox. She flourished in South Bend, where she spent the remainder of a successful career. In 1951, Kidd posted an 11 – 7 mark with the Sox and followed with a 13- 7 record in 1952. The Blue Sox won the AAGPBL Championship in both seasons.

Although Kidd’s record slipped to 13 -15 for the Blue Sox in 1953, she pitched well and often for the pitching-starved Sox. Kidd posted a sparkling 2.37 ERA and led the team with 258 innings pitched. One of the highlights of the 1953 season occurred on July 4th, when Kidd pitched complete-game victories in both ends of a doubleheader against the Cedar Rapids Chicks.

Kidd was just 19-years-old during the 1953 season, and perhaps her youth contributed to her status as a local favorite in South Bend. On July 8, 1953, she was honored by the team with a “Sue Kidd Night” at South Bend’s Playland Park. A publicity photo from the previous season featured Kidd on a mule with her suitcase, “riding in from Arkansas,” so naturally, on “Sue Kidd Night,” she would be expected to ride onto the field on a mule. Apparently, the plan was not acceptable to the mule, who balked at the foul line. The stubborn animal added to the fun on a night that saw Sue receive numerous gifts from fans and the team.

The 1954 season would be the last for the AAGPBL and, consequently, the last professional season for Sue Kidd. She won nine and lost six for the Blue Sox. In a modified league, depleted by financial problems, that included only five teams, Fort Wayne, Grand Rapids, Kalamazoo, Rockford, and South Bend, Kidd pitched in just 18 games.

When her years in professional baseball ended abruptly at age 20, Kidd returned to Choctaw and enrolled at Arkansas State Teachers College in nearby Conway, Arkansas. She earned bachelor’s and master’s degrees in physical education, and in 1965, Kidd began a 25-year career in teaching and coaching in Logansport, Indiana, about an hour’s drive south of South Bend where she had played in the AAGPBL. Sue Kidd is still remembered around Logansport. A beloved teacher and coach, she moved from baseball to fast-pitch softball, where she excelled as a pitcher.

Two other women with Arkansas ties distinguished themselves in the AAGPBL. Delores “Dee” Brumfield White was an outstanding hitter in the early 1950s and later a beloved professor at Henderson State University. The softball field at Henderson bears her name.

After her retirement from teaching, Glenna Sue Kidd returned to Choctaw and settled near her family. After the 1992 film, A League of Their Own, introduced new generations to the AAGPBL, the former women’s professional baseball players enjoyed renewed attention. Kidd made several appearances with former teammates, including a quick glimpse of her pitching in the background of a scene in the movie. Sue Kidd died in Choctaw, Arkansas on May 4, 2017. Her gravestone bears the famous line from the movie, “there’s no crying in baseball.”

He's still a folk hero in Arkansas; He could have beaten me for governor...