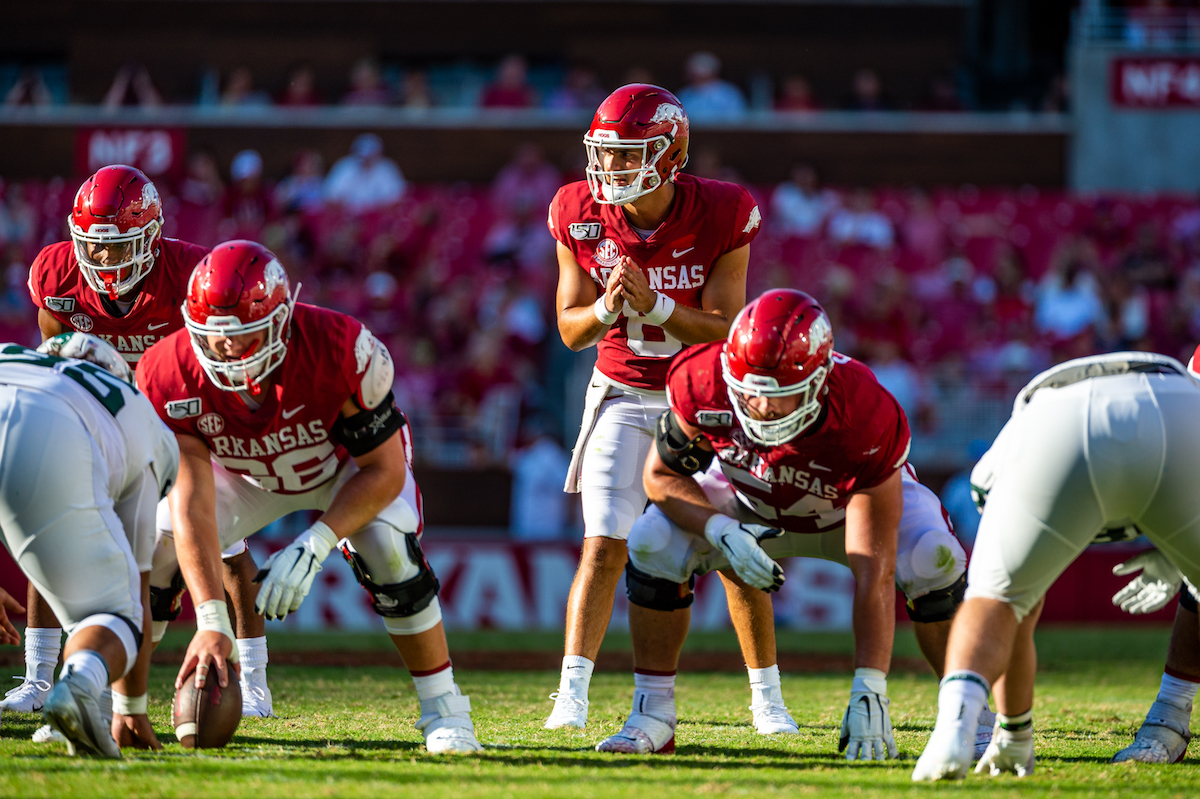 A seven-overtime game in 2001. The Hunter Heave in 2015. The last four games decided by a total of 10 points. If there’s anything predictable about the Arkansas-Ole Miss football series, it’s that it’s absolutely, positively unpredictable.

Expect nothing less for this Saturday’s rumble in Oxford, Miss. In Week 2, both programs need a win for confidence heading into the usual meat-grinder SEC West slate. Arkansas’s chances at finishing with the necessary six wins for a bowl game bid would take a huge hit with a loss.

Ole Miss lost 15-10 at Memphis last week. The Rebels, coached by a former offensive line coach in Matt Luke, managed to ring up exactly -1 yards on the ground. The Rebels went 0 for 6 on third downs.

Still, while the offense struggled, the Ole Miss defense improved in the second half. Expect it to give Arkansas a stouter test than its first opponent, Portland State.

Tailback Rakeem Boyd looks just as good as expected coming into his junior season. Quicker and stronger than last season, he racked up a career-high 114 yards on 18 attempts. Arkansas needs his running mates Chase Hayden and Devwah Whaley to step up in what will be trench warfare against Ole Miss.

The offensive line graded as slightly above average, earning an 81.8 pass-blocking grade and 70.7 run-blocking grade according to Pro Football Focus. “We’ve got to get up to the second level a little better,” head coach Chad Morris said. “I think that we did a good job of covering them up. (We) want to get a little more knock-back, play a little bit lower, but overall they played well.”

Against Ole Miss, Arkansas will welcome back C.J. O’Grady, its star tight end who missed the season opener recovering from a knee injury. O’Grady would have provided the exact kind of quick-strike option that Hog quarterbacks needed against Portland State’s shifting defensive fronts.

The wide receivers didn’t hang onto the ball well against PSU. According to Pro Football Focus, they dropped seven passes, though later the coaches recalled that number as less. “We had four drops and of those four drops, two were key third-down drops where we had momentum and we were moving the ball down the field,” Morris said. “To have two drops on third down was tough.”

Those drops, plus two passes thrown away, led to starting quarterback Ben Hicks completing just 14 of 29 passes for 143 yards. With no drops or throwaways, his completion rate would have jumped from 48.3 to 77.8 percent. “If he could just land somewhere in the middle, so about 63 percent, Arkansas’ offense would be much better off,” HawgBeat.com’s Nikki Chanvanelle notes.

Heralded true freshmen receivers Treylon Burks and Trey Knox finished with a total of four catches for 90 yards, but they were open on a couple deep routes. Hicks didn’t see them in time. Deep passing plays are a big part of Morris’ offense and backup quarterback Nick Starkel is better equipped for the long bomb with his stronger arm.

Although Starkel threw a bad interception in the season opener, expect him to play longer against Ole Miss if Hicks continues to miss the deep targets.

This is where the Razorbacks shined the most.

Yes, there was a breakdown in Portland State’s second-to-last drive to give the Vikings a late touchdown, but otherwise, the defense played well. Defensive back Kamren Curl and lineman McTelvin Agim led the effort, both notching two sacks. In all, the Hogs defense notched six sacks — the most in a Razorback season opener since 2002.

Defensive end Dorian Gerald also played a big role early on, making five quarterback pressures in only 20 snaps. Unfortunately, the senior suffered a strained neck artery (yes, “ouch” is an appropriate reaction) and will miss the rest of the season as a precaution. “You really feel for Dorian. He has prepared hard in the offseason,” defensive coordinator John Chavis said. “Hey, it happens. In this game you get injuries and you’ve got to get people ready. That’s why in the fourth period we played a lot of young people.”

Stepping into Gerald’s starting position will be senior Jamario Bell out of Junction City. Behind him, though, are true freshmen Collin Clay and Zach Williams. On the other end, true freshman Mataio Soli is the top backup.

They will be tasked with trying to corral what could become an explosive Ole Miss offense under first-year Rich Rodriguez, an early mastermind of the up-tempo, spread systems that now prevail across the nation. Although the Rebels, specifically Ole Miss quarterback Matt Corral, struggled early at Memphis, they should be more in sync at home.

On both sides of the ball, the Hogs will depend on true freshmen to provide playmaking and depth. That’s great news for the future of the program, but in the short term will mean erratic performance.

If enough of Arkansas’ young guys play well on Saturday, though, the Hogs have a great shot at securing their first SEC win in two seasons.