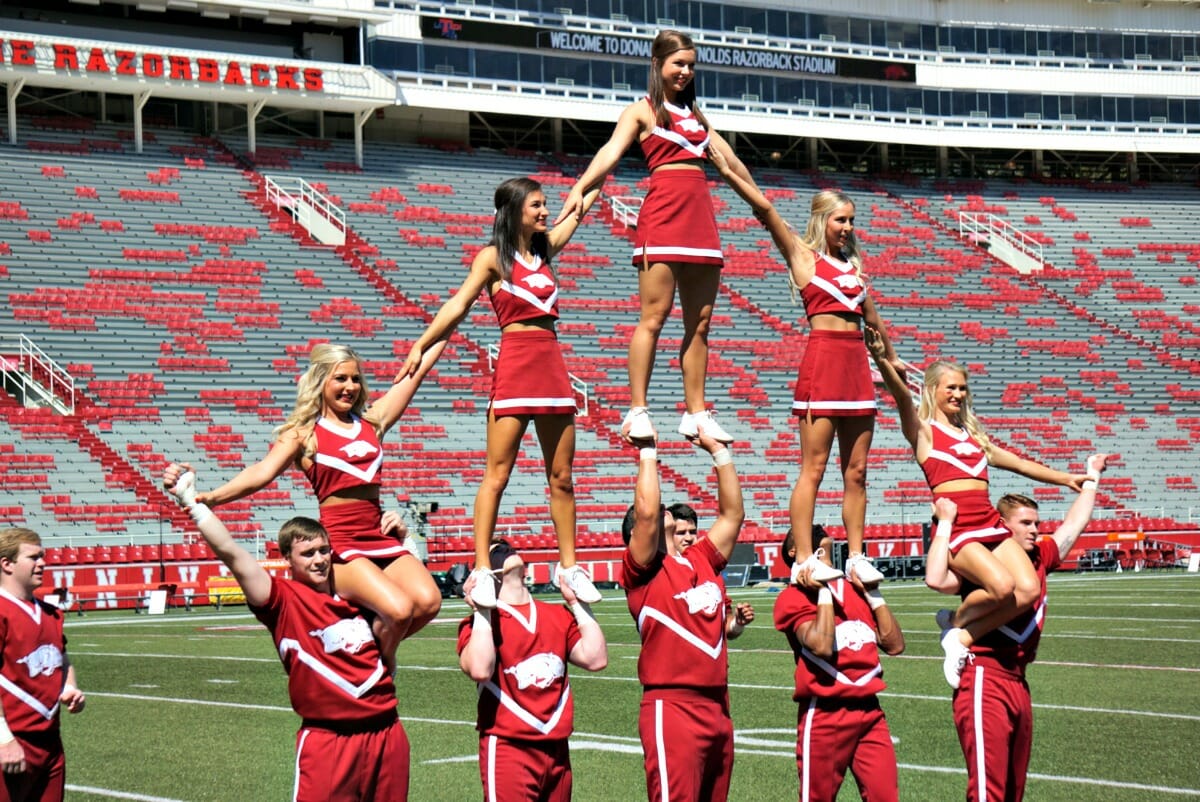 “All right all you Razorback fans, let’s stand up and call those Hogs!”

Arkansans know the words leading into the famous Hog Call. We look forward to this game time tradition when fall rolls around and brings a new season of Razorback sports, but how much do we know about those leading the cheer?

The Razorback Spirit Squad is on the sidelines at many Razorback events leading the Hog Call, but these sometimes overlooked student-athletes do far more than that. The squads cheer at all Razorback football, basketball, baseball, volleyball and soccer games as well as gymnastics meets. They also make appearances at softball games, tennis matches and swimming and diving meets. In short, they’re very busy!

Brooke Bailey is head of the Razorback Spirit Squad. In April, she oversees an extensive selection process as University of Arkansas students try out for the cheer or pom squads or to be a mascot. At the weekend tryouts, students run through a series of evaluations to score them on specific skills needed to participate in a Division I collegiate program. They also complete an interview as part of the tryout.

The Spirit Squad is made up of two co-ed cheer squads, two dance squads, and six mascots. The cheer squads – Cheer Arkansas and Cheer Razorbacks – are both co-ed teams with students from all grade levels, freshmen through seniors, who cheer at many of the games, attend campus pep rallies and other events, and can be found out in the community as well. The dance teams, Pom Arkansas and Pom Razorbacks, cheer at many events and also perform at Men’s and Women’s Basketball and fill the role of RBI girls at Razorback baseball games. They lead cheers and dance on top of the dugouts before the game and between innings.

The Razorback mascots are probably the most well-known part of the Spirit Squad. The squad has six mascots. Big Red is the tall Razorback you see running down the field or around the courts. He is the original mascot and two students share the role of bringing Big Red to life. Sue E. is a female Razorback and wears a cheer outfit similar to those of the squad. Pork Chop is the kid version of Big Red. Two students are chosen to be Sue E. and two will play Pork Chop for the entire year. Boss Hog is hard to miss at Razorback events. The nine-foot inflatable mascot brings the most laughs with his antics, sometimes bouncing to the ground, standing on his head or shooting basketballs from his snout. One student gets the honor of being the Boss. Ribby rounds out the set of Razorback mascots and appears at baseball games in his Razorback baseball uniform and cap.

The last mascot doesn’t have to try out for the team in April. He isn’t even human. Tusk is the live Razorback mascot who attends home football games in his own Spirit Squad vehicle. Tusk lives with the Keith Stokes family in Dardanelle when he’s not at games and events.

Members of the Razorback Spirit Squad spend as much time preparing for games and events as other student-athletes. They practice Monday through Thursday for two to three hours along with morning conditioning. Weekends are spent performing at athletic events and community appearances. Meanwhile, the students must carry a full class load and maintain a 2.0 GPA, but the Razorback Spirit Squad excelled in the classroom last spring with an overall GPA of 3.56.

The students have little time off during the school year. They still cheer during school breaks when there are athletic events like basketball and they often travel as much as the athletic teams to cheer at away games. For these student-athletes, there is no off season. They arrive on campus in late July to begin working on tumbling, cheers, routines and conditioning. When August arrives, along with the kickoff of sports season, they cheer all year long, ending in May when baseball season concludes. After a short summer break, it’s back to College Spirit Camp to prepare for the next year.

When you see the Razorback Spirit Squad on game day in Fayetteville, it’s likely the members have already been on campus for hours. They begin four hours before kickoff with a warm up on the field before heading to pep rallies at tailgating areas like the Gardens, Alumni House and Chancellor’s House. They also greet the team as the players arrive. The cheerleaders enter the stadium riding atop Tusk’s portable cage and then the work begins as they bring game day cheer to all the fans at the stadium.

Next time you hear the words, “All right all you Razorback fans, let’s stand up and call those Hogs,” you can cheer along with the Spirit Squad with a new appreciation for those leading that  famous Wooooooo-Pig-Sooie!

One response to “Behind Game Day: Razorback Spirit Squad”