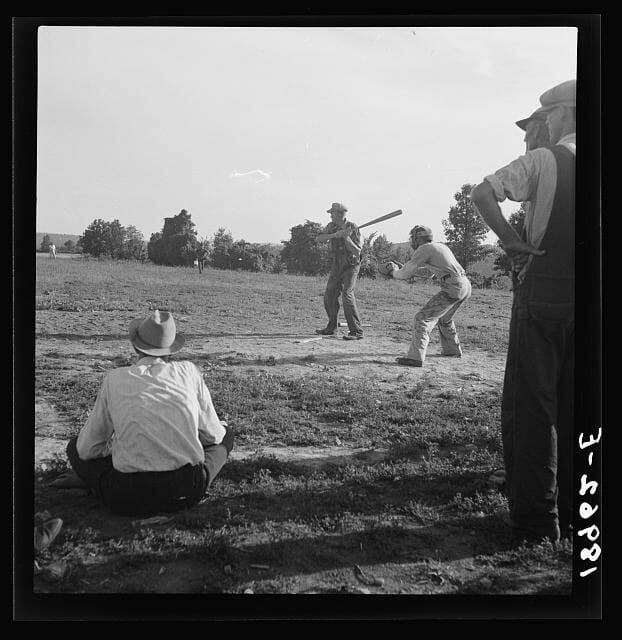 Anybody who has ever had the privilege of seeing me play knows I am the greatest pitcher in the world.” – Dizzy Dean

Jay Hanna Dean remains the face and personality of the rural Arkansans who starred in professional baseball in the first half of the 20th century. Part Cy Young and part Davy Crockett, he blustered into the limelight with both talent and bravado. Dizzy was selected for the Baseball Hall of Fame in 1953, and the Dean name is permanently linked to Arkansas baseball history.

Much has been written about Dizzy Dean. His years with the St. Louis Cardinals Gas House Gang are the subject of legend, biographies and “Diz” stories that filled the sports pages. His four seasons with the Cubs, after a toe injury altered his delivery and led to arm problems, are also well documented. What has not gotten significant attention is Dizzy Dean’s 1947 “season.” Perhaps because it occurred seven years after he retired.

With his fractured English usage and affection for hillbilly phrases, Arkansas legend Dizzy Dean was an unlikely radio sportscaster. He was, however, likable, entertaining and always Dizzy Dean. A St. Louis favorite, he was the voice of the Cardinals from 1941 until Harry Caray replaced him in 1946. Carey was a hometown St. Louis guy, he could pronounce most player names correctly, and he was more effective on beer commercials due to extensive experience with the products. Unfortunately, the change left Diz to be the voice of the lowly St. Louis Browns, a team that was always the city’s “other team.” The Browns were consistently burdened with low attendance and little media attention.

Diz was candid, sometimes abrasive, and often impatient with the hapless Browns. Tagged with the unofficial motto of “First in Shoes, First in Booze, and Last in the American League,” the Browns were more laughable than competitive. In the radio booth, Diz got a few laughs, but his competitive spirit often took over and Browns’ players were the target of some scathing criticism from Dean.

The 1947 season was a typical Browns’ year. They started slowly and got worse from there. By mid-September, they had wrapped up last place. As was his custom, Diz often added to his unflattering descriptions of the pitching staff the boast that he could do better. He disdainfully claimed, not that he could have done better in his heyday, but he could do better now!

The fans took him at this word and by the late season, they were calling for Diz to come down from the broadcast booth and back up his claim. Perhaps, because they could do no worse, or more likely as a publicity stunt, the Browns announced in mid-September that they had signed their radio broadcaster to a one-game contract. Details of the contract were not disclosed, but the terms were reportedly $1 and perhaps a share of the gate.

Many writers predicted Dean would be a complete failure while others did not think the stunt was humorous at all, but Dizzy’s bluff had been called. He had backed himself into a corner with his mouth and his worn right arm would have to answer the call.

After drawing a dismal 315 fans for a game the week before, nearly 16,000 fans were on hand that Sunday for the Browns’ last game of 1947 against the Chicago White Sox. Most were there to see Dizzy Dean.

The White Sox leadoff hitter greeted Dizzy with a sharp single to left. Thousands must have thought, “Here we go!” Fortunately, the next batter hit a hard ground ball to the shortstop who started a double play. The third-place hitter went down harmlessly and somehow Dizzy Dean had survived a major league inning without giving up a run.

Typically, the Browns failed to score in the first and in the White Sox second Diz found trouble quickly. After one out, a single and a walk put two runners on base. With two on and one out, fate once again provided Diz with a pitcher’s best friend, a ground ball to shortstop and an inning-ending double play.

After the Browns again failed to score in the bottom of the second, Dean who had escaped disaster in both the first two innings, returned to the mound. He isolated a harmless single between three routine outs and set down the White Sox in a scoreless third.

Dizzy was due up first for the Browns in the third inning. A pinch hitter and a smooth exit were not acceptable in his mind. Since his primary role was probably to entertain, Diz first strolled to the plate with a miniature bat. Unamused, Umpire Cal Hubbard immediately ruled the toy illegal and sent Diz looking for an approved model. Diz returned to the plate with an orange and brown barber pole striped bat. Since technically it met specifications, the bat was allowed. As should have been expected on an occasion that was unquestionably Dizzy Dean’s day, he rapped veteran Eddie Lopat’s first pitch to right for a single.

Diz was ready to pitch and perhaps even ready to bat, but totally unprepared to run the bases and proved it by sliding awkwardly into second when the next Browns’ hitter grounded out. He got up limping and hobbled back to the dugout with what was later diagnosed as a pulled muscle.

The Browns managed not to score in the third. After Dizzy’s apparent injury, he was not expected to pitch the top of the fourth. Once again, this was Dizzy Dean’s day in the sun. He asked for it, he got it, and he was in the spotlight one last time. Somehow he limped to the mound in the fourth inning and sent the White Sox down in order, his easiest inning of the game. It would be his last inning. After pitching an amazing four scoreless innings the incomparable Dizzy Dean was replaced by a reliever. The relief pitcher promptly gave up five runs to provide the Browns their accustomed loss.

Dizzy continued with a very successful broadcasting career. When America began its love affair with TV sports in the 1950s, Dizzy Dean was one of the first stars of TV baseball. His “Howdy Pardner” greeted millions who saw their first live major league game on TVs Game of the Week.

As for pitching, Dizzy was finished this time. He never pitched in a major league game again, but he never stopped saying he could if he wanted to. After all, “It ain’t bragging’ if you can do it.” – Dizzy Dean