3 Challenge Goals For Getting Fit in the Arkansas Outdoors 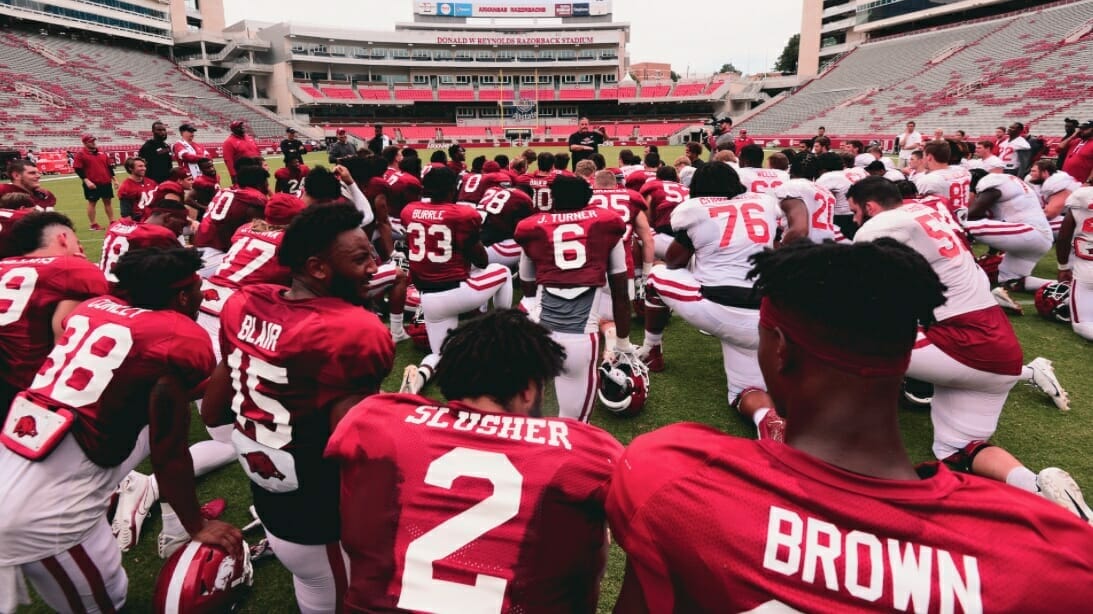 With the hours counting down to the Arkansas Razorbacks’ season opener at 1 p.m. Saturday against the Rice Owls, the anxiety level is high among Hog fans.

It’s been five years since the Razorbacks have tasted a winning season, a mediocre 7-6 year in 2016 that was Bret Bielema’s second to last season as Arkansas’ head coach. The Hogs could have easily been a more solid 9-4 that season. Still, the Razorbacks surrendered double-digit leads to Missouri in their final regular-season game and to Virginia Tech in the Belk Bowl that foreshadowed the hard times to come for the program.

The Hogs appeared to be on the upswing just the year before, with a solid 8-5 showing under Bielema, including victories over Tennessee, Auburn, Ole Miss, LSU, and Missouri. Something turned in that offseason, though, and Bielema never regained his swagger as the Hogs’ head coach. He was pushed out of his job two years later, chasing after Gus Malzahn but ending up with Chad Morris as head coach.

The result of that hiring fiasco was two seasons of the worst Razorback football that most anyone alive can remember in 2018 and 2019.

While it’s hard to point to any one thing that sent the Hogs program into a spiral over the last five years, one of the obvious changes was the loss of current Razorback head coach Sam Pittman from Bielema’s staff. Pittman left Arkansas to advance his career and become Georgia’s offensive line coach and assistant head coach under Kirby Smart.

The move seemed to leave Bielema, now head coach at Illinois, flailing as he asked Arkansas’ offensive lineman to go to their beloved Pittman and attempt to get him to stay. They may have passed now, but there were hard feelings on both sides.

Interestingly enough, Bielema’s tenure at Arkansas waned from that point, and Pittman’s stature as a coach only grew.

Sometimes it’s strange how things work out. Many of those same offensive linemen whom Bielema cajoled into begging Pittman to stay were the Razorback alumni who rallied to push Pittman’s name to the forefront when Arkansas athletics director Hunter Yurachek had to find a replacement for Morris.

Despite Pittman’s outstanding reputation, it appeared he was a long shot at getting the Razorback job at first, but as candidate after candidate — Lane Kiffin, Eliah Drinkwitz, and Mike Leach, to name a few —cast their eyes elsewhere, Pittman’s candidacy looked more and more viable.

A similar desire expressed by Eric Musselman pushed him to the top of Yurachek’s list when he felt compelled to replace Mike Anderson the year before as Arkansas’ basketball coach.

Pittman’s desire to be at Arkansas, maybe, to see a diamond in the rough is something Musselman and Pittman shared. Maybe, it made them even more attractive to Yurachek because he likely saw the same attributes in the program when he left Houston to be the Hogs’ AD in late 2017?

I like that kindred spirit among three of the Razorbacks’ four heavy hitters. As for head baseball coach Dave Van Horn? There is no doubt he saw the potential resting in Fayetteville when he made the leap from Nebraska in 2002, and while his Hogs are still knocking on the national title door, his program is one of the most respected in the nation.

It’s hard to sit here and predict that Pittman will ever enjoy the type of success that Van Horn or even in the short term that Musselman has had at Arkansas. The Razorbacks’ gridiron drought has just gone on for so long.

That said, this Razorback squad seems as together and committed to each other as any we’ve seen in a while. Now, togetherness doesn’t always equate to success on the field, especially in the SEC.

However, the bond between these Hogs seems very strong, and Pittman has fostered that.

All Hog fans watched how this team struggled last year through what was no doubt one of the toughest if not the toughest season schedules in the history of college football because of the pandemic. The Razorbacks weren’t always up to the task, but they competed with a drive and desire that Hog fans hadn’t seen in some time.

Hopefully, that desire will bear sweeter fruit this season.

The adjective “great” is often used too loosely. It’s used so...

How sweet it is for the Arkansas Razorbacks to be back dancing in the...