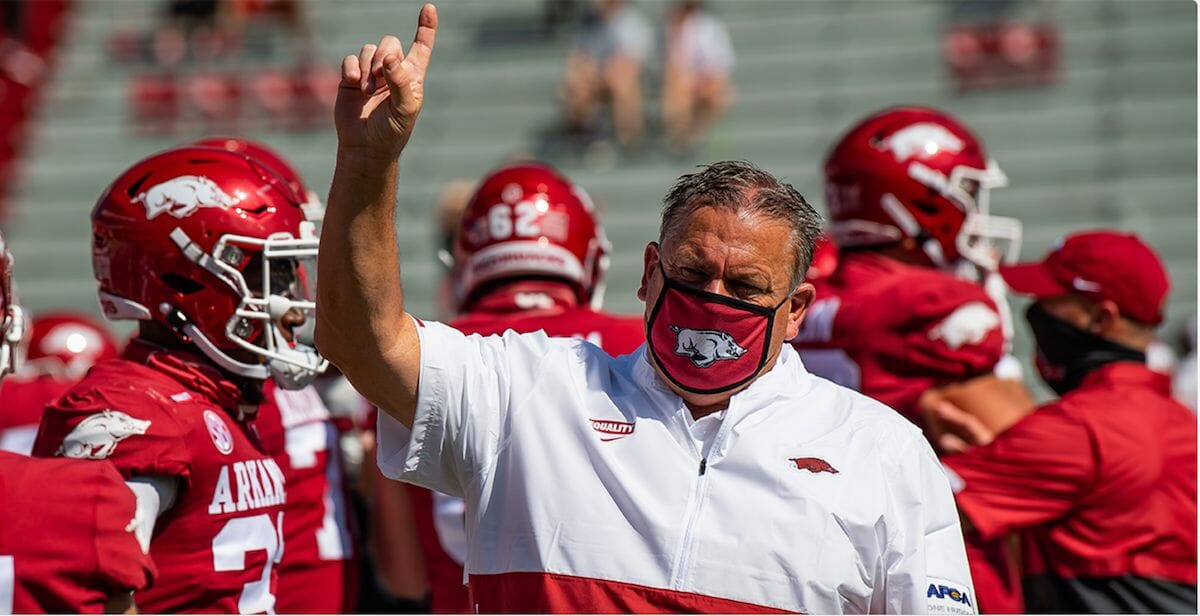 Sam Pittman was feeling on top of the world.

His unranked Razorback football team had just knocked off No. 16 Mississippi State on the road, and now, in the locker room, he had his first chance to address his team, to let them know their hard work had paid off and that this first victory of his head coaching tenure was the start of something special.

Oh, and that it was time to party too. “Turn that damn jukebox on,” Pittman shouted amid his players’ whoops and hollers as they started to break into dancing.

That entire raucous scene, filmed and blasted out on social media, caught the attention of Razorback athletic outfitter Nike. Pittman later said Nike mailed him a shirt saying, “Turn up that damn jukebox” within days.

It’s ironic, though, because Pittman isn’t one for slogans or sayings. No #Uncommons or “left lane, hammer down” talk from the 58-year-old native of Grove, Oklahoma.

If Pittman has any go-to phrase, it may be “unacceptable.” After Arkansas’ 21-14 win over MSU, the first SEC win for the program after 20 straight conference losses, Pittman said he wanted his players to focus on what they did wrong as well as right during game film review: “I’m going to show them why we had success, what we have to work on to get better, and some things that are unacceptable.”

Arkansas linebacker Bumper Pool, who racked up 20 tackles against the Bulldogs, has already absorbed Pittman’s high standards. And not just on the field, either. Like Pittman, he expects the Hogs to compete hard against and challenge top SEC schools.

Last year, the Hogs celebrated a win over Colorado State, a sub .500 mid-major program, with a surreal “Club Dub” celebration that involved disco ball and fake bouncers. That schtick didn’t go over too well with fans, and returning players like Pool never want to see it again.

“A ‘Club Dub’ celebration is never acceptable,” Pool said after the MSU win October 3. “The work that we put in this — this one’s a lot different. It’s not a surprise. We didn’t beat an out of conference school; we beat an SEC school. We felt like we earned it because of the work we put in. We were four days a week, grinding it out. And I think we’re going to keep that mentality.”

Grinding without gimmicks has always been Pittman’s style. “We’re kind of a blue-collar university and state and football team,” Pittman said this week. “We’re just going to get our lunch pail, go to work and see what happens on Saturday.”

To a certain extent, every football coach embraces a “blue-collar” ethos of hard work, heart and execution. Not all can achieve it with their teams, however. Through his first two games as head Hog, Pittman has shown this won’t be a problem under his watch.

Part of that comes down to not micromanaging and hiring the right assistants, which Pittman did by getting defensive coordinator Barry Odom and offensive coordinator Kendal Briles. Part of it, too, is putting first things first. In football, everything starts at the line of scrimmage.

Pittman’s bread and butter is the offensive line, a position he coached for decades, and so far this season, the Arkansas offensive and defensive lines have been a lot better than in previous years.

Teams don’t play hard unless they truly believe they can win, even when their stars are out. The most important thing Pittman has done with the program so far is to get the players truly, firmly believing in themselves again.

The Hogs showed that against Mississippi State when three of their biggest contributors — running back Rakeem Boyd, wide receiver Treylon Burks and cornerback Montaric Brown — all left the game before halftime due to injuries. On top of that, the defensive line remained stout despite missing two of its starters, while starting linebacker Grant Morgan got hurt early on and had to play the entire second half with his left arm wrapped. Morgan finished with 15 tackles, making nine of those after halftime.

Despite talent and depth issues, Pool, Morgan and the rest of the Razorbacks showed they can still grit out wins.

They will need to do more of that for the rest of the season, which is packed with more top 25 teams like Auburn (this Saturday), LSU, Florida and Alabama. It’s a formidable SEC-only schedule that many agree is the hardest in college football history, but so far, these Hogs have shown they stand a fighting chance against most anybody.

Under Pittman, anything less would be unacceptable.

2 responses to “Sam Pittman Turns Up the Arkansas Jukebox”