Treylon Burks Needed More Than Ever Against Texas A&M 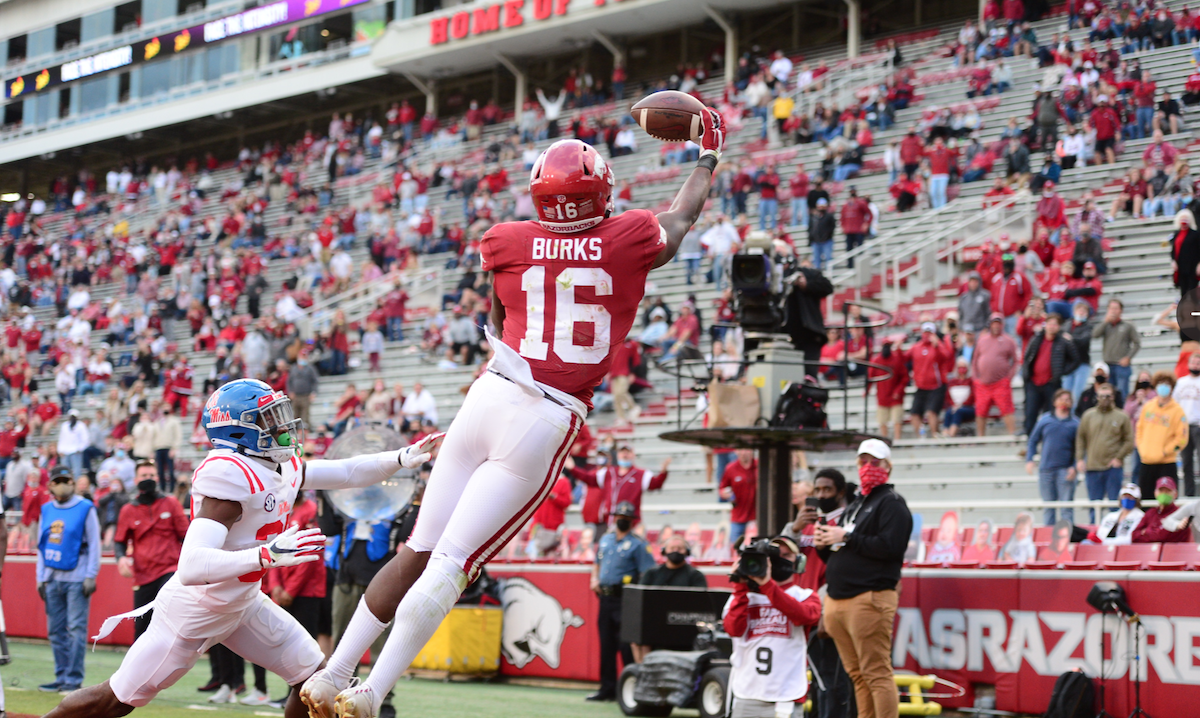 We had heard it for years. Those who saw Treylon Burks play for Warren High School swore up and down that this young man was the real deal on the gridiron and that he could do things in football that no Arkansas native had ever been able to do before.

They told us that once Burks arrived at the University of Arkansas and really got it going with that 6’3″ and 232-pound frame of his, watch out.

Well, it took 14 games, but now not only do Razorback fans know what those foretellers meant, but so do most college football fans across the nation.

After 13 games as a Razorback in which Burks provided snapshots of vast talent but never delivered an overwhelming performance, Treylon Burks truly broke out in his last game with career highs of 11 catches and 137 receiving yards despite playing at about 80% because of a knee injury. In the Hogs’ 33-21 win against Ole Miss, Burks also chipped in 46 rushing yards on four carries, most of which came on run-pass options from Hogs quarterback Feleipe Franks.

While he was at it, Burks also tossed in an iconic play.

Deep in the final quarter, the Razorbacks were on top 20-14 but needed to score again to fend off a hot Ole Miss offense that had reeled off two straight touchdowns.

So, on third down from the Ole Miss 7-yard line, Franks lofted a beautiful fade into the corner of the end zone where only one person in the stadium had the ability to get it. Amazingly Burks did, using his abnormally large mitt size to snag the ball with his right hand and tap his right foot down just a few inches from the sideline.

The jaw-dropping snag ranks as one of the best one-handed catches from an Arkansas native this year, alongside a couple of Red Wolf Jonathan Adams’ catches in Arkansas State’s season-opening upset of Kansas State.

But two Saturdays ago, it ranked as the best play in all of sports. That night, ESPN’s SportsCenter gave Burks’ magnum opus top billing in its Top 10 plays rundown.

Going forward, the Razorbacks are going to need Burks to deliver more magical moments to fulfill the team’s potential as one of the SEC’s best teams. So far, the Hogs are 2-2 on paper, but 3-1 in the minds of many fans after a controversial no-fumble call late in the Auburn game went against Arkansas.

Sam Pittman’s team has emerged as a national darling, with its swarming, ball-hawking defense taking top billing so far. The Razorbacks are a top 10 defense in the nation in terms of total yards allowed and rank at or near the top of the SEC in stats such as tackles, interceptions and turnover margin.

In the last three games, the offense has done just enough to get by, but it hasn’t taken off like many expected when Kendal Briles assumed the offensive coordinator position this past offseason.

A good time would be this Saturday on the road against No. 8 Texas A&M.

It’s been nearly a decade since the Hogs beat the Aggies, which has caused many fans to want this game more than any other on the current schedule. When Arkansas is on defense, Texas A&M presents considerable challenges.

“They’re very, very physical, very big and very aggressive at safeties,” Sam Pittman said this week. “I mean very aggressive. Their safeties are almost like outside inside linebackers, coming down to the ball. So, they got them playing really well, and they’re playing with a lot of confidence.”

This isn’t the kind of game that Arkansas can expect to lean on the pass to win. The Hogs will need to see continued development from the offensive line and get a better 1-2 punch from tailbacks Trelon Smith and Rakeem Boyd, a former Aggie.

But nothing softens up an aggressive secondary and opens the run game like a swift-striking, accurate air attack. There, Arkansas needs Burks — alongside his fellow wideouts like Mike Woods and De’Vion Warren — to keep showing out.

“He’s just a leader. I love him,” Franks said of Burks after the Ole Miss game. “He’s a very physical guy; he made some big plays out there. You could see the rust on him a little bit, too, from not being healthy the last couple of weeks. But he’s a competitor. He loves Arkansas.”

Another 100% effort from Treylon Burks, this time at 100%, could be enough to help score the biggest Razorback win of the Sam Pittman era so far.

Photos are courtesy of Razorback Communications.