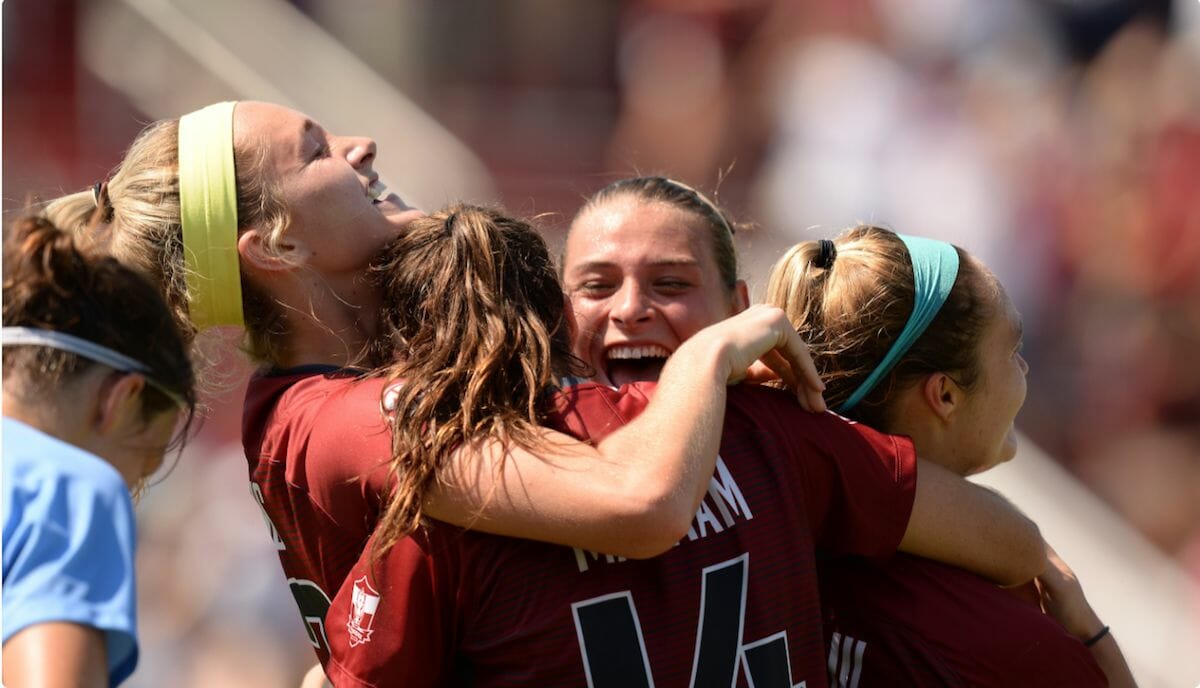 In soccer, Arkansas has always taken a back seat to the big boys (and girls) from the East Coast.

On Sunday, the Razorback Women’s Soccer Team beat No. 1 North Carolina, the first time an NCAA team from this state has ever beaten a No. 1 team in the sport. The 2-0 win in Fayetteville is historic for another reason: It’s the first time an SEC school has beaten the powerhouse Tar Heels by two or more goals.

“They outworked us – every pass for us was difficult, it seemed,” UNC’s head coach Anson Torrance said afterward. “Their pressure was tremendous, and we were not able to break it often enough to create a chance.”

North Carolina has won 22 NCAA national championships (producing the all-time great Mia Hamm), while Dorrance has won seven national coach of the year honors, but none of that mattered on Sunday.

Arkansas has now won five games in a row, having beaten No. 22 Baylor on the road in its previous game and allowing no goals so far in September.

The Hog defenders and senior goalkeeper Katie Lund, a transfer from TCU, deserve credit. “Our back [line] are playing unbelievable, ” Arkansas soccer coach Colby Hale said on Pig Trail Nation. “Katie’s been a huge addition for us, on and off the field.”

“I just got here, but I think this team is really special,” Lund said. “We all put it out there on the line for each other, whether you play 90 minutes or you don’t play at all. Everybody is giving it their absolute best. And it shows on the field.”

The offense, too, is starting to click on all cylinders.

For the first two-thirds of the UNC match, the Razorbacks knocked on the door, finally breaking through in the 63rd minute.

That’s when midfielder Taylor Malham and defender Marissa Kinsey connected. Kinsey passed a ball that split the Tar Heel defense, allowing forward Anna Podojil to run on to it. The freshman used her right foot to slot it to the opposite corner past the Carolina goalkeeper, triggering bedlam on the Razorback sidelines and among the Hogs faithful.

With 10 minutes left, Arkansas’ Parker Goins sealed the match with a goal off a pass from Tori Cannata.

Arkansas is now 6-1-1. Early in the season, it lost in double overtime to Oklahoma and tied Minnesota. “We went through some early stuff. We weren’t playing bad. We just didn’t feel like us,” Hale said. “We talked a little more about who we wanted to be, more off the field, more from a character and toughness standpoint. They kind of established who they wanted to be, and since then we’ve been very, very good.”

Good enough to get some social media love from the coaches of the most high profile Razorback sports. Football coach Chad Morris, who’s proven to be a dancing dynamo at the football Hogs’ “Club Dub” [short for “W,” or “win”], Tweeted: “Club Dub getting full in Fayetteville this weekend! Congrats @RazorbackSoccer! Big W.”

Finally, the Razorbacks athletic director Hunter Yurachek had his say:

BOOM! @RazorbackSoccer defeats #1 and previously unbeaten UNC 2-0. The 2nd nationally ranked team the 6-1-1 and unranked Razorbacks have beaten this week. Guessing the soccer gurus will give us a little respect this week. #WinAsOneRazorback https://t.co/rddUQGi94o