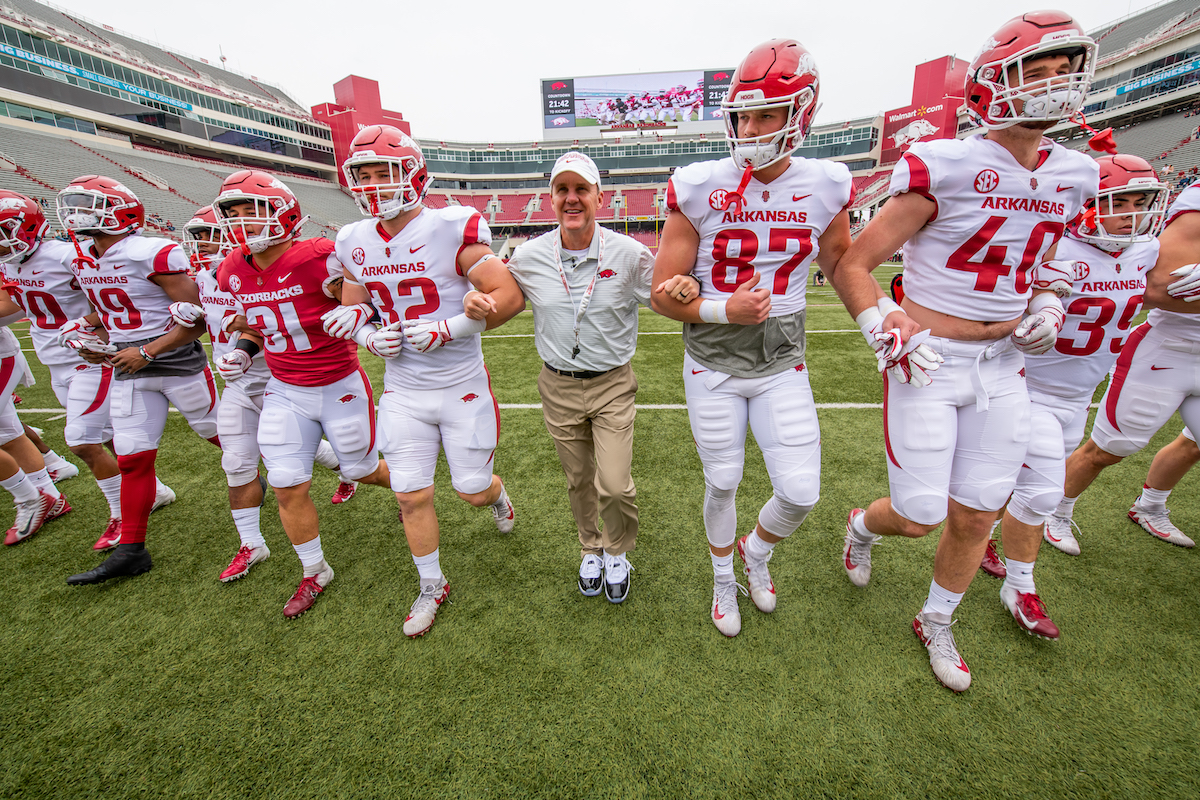 Arkansas’ fall football practice begins August 2 with the Hogs’ first game only 29 days later. Naturally, a lot of talk will revolve around how Ben Hicks and Nick Starkel perform as quarterbacks, and whether the offensive line has improved since last season. But quarterback and o-line are eternal concerns for any team.

Beyond those, here are three of the biggest questions Arkansas faces in its final tune-up for the 2019 season:

One reason Arkansas’ offense struggled so much last season was that its receivers didn’t have enough speed and elusiveness to gain big yards after the catch. Nobody, it seemed, had the kind of “turbo” button option to keep opposing defensive coordinators up at night.

As a freshman starter in 2018, though, the 6’1” Michael Woods showed promise. He finished third on the team in receiving yards for 11.8 yards per catch. After slimming down from 202 pounds to 190 pounds, expect Woods to be more explosive this year. He’s going to be a leader on a young receiving corps that features a few four-star true freshmen including Treylon Burks (a Warren native) and Shamar Nash.

So far, the most impressive of the bunch is Trey Knox, a 6’5”, 218-pound receiver who showed flashes of what he’s capable of during the spring game. He served up a darting, 45-yard touchdown burst in the Red-White game that was one of the offense’s few highlights.

“Knox is going to be great,” Woods told Hawgs Illustrated. “He’s got a great work ethic. I come by the office at night, and I see Knox up here, too, almost every time. We come by ourselves some. He’s a great dude, someone I really get along with.”

Offensive coordinator Joe Craddock expects big things from both players. He’s challenged Woods to “work hard on the points where he comes out of breaks on his routes,” while he has told Knox he needs to play beyond his years. “He had a good spring for a freshman, but we want him to move ahead to where he’s a sophomore,” Chaddock said. “We want him to play like a second-year player.”

Its defensive line didn’t disrupt opposing quarterbacks enough, and the team paid for it. Arkansas gave up 34.8 points a game, second-worst in the SEC ahead of only Ole Miss. This was especially maddening for John Chavis, the most accomplished defensive coordinator in SEC-era Razorback history.

In his first year in Fayetteville, Chavis simply didn’t have the personnel to do damage.

That will begin to change this fall — potentially in a big way.

After a season of acclimation, former JUCO superstar Dorian Gerald is primed for a breakout season at defensive end. In 2017, Gerald was the No. 1 ranked strong-side defensive end and chose the Hogs over LSU, Florida, Georgia and Florida State among others. But he never hit his stride last fall after arriving on campus just a day before practice, 20 pounds overweight.

Playing in eight games, Gerald finished the season strong, starting his last two. After losing 20 pounds, he’s much improved this spring and summer, Chavis told Hawgs Illustrated: “He’s gotten to the point where he really understands the position. He’s gotten a lot better. He’s started to play with the speed and quickness that we knew he had.”

Joining Gerald at end will be seniors Gabe Richardson, Jamario Bell and some very talented true freshmen. In that cohort, expect Zach Williams (Pulaski Robinson High, Little Rock) and Mataio Soli to make the most noise this fall. Both players are about 6-4, 230 pounds and unusually athletic. “I told Zach and Soli that if they listen to us, take our advice, they will have a chance to be freshman All-Americans,” Gerald said. “If they just keep on taking strides, they can be great.”

This strength at end has let preseason All-SEC defensive lineman, McTelvin Agim, move back inside to tackle. The senior had been playing on the outside for much of the last two seasons, but has now bulked up to a career-high 296 pounds. Hungry for a chance to help turn around the Hogs’ fortunes and improve his NFL stock, expect Agim to improve on last year’s numbers of 45 tackles with 10 tackles for loss, 4.5 sacks and three forced fumbles.

Sure, De’Vion Warren was sensational as kickoff returner, and Connor Limpert had one of the best-ever seasons for an Arkansas placekicker. He made all 29 of his extra-point attempts and hit 19 of 24 field-goal attempts (including a 55-yarder).

But in punting, as well as coverage of punt returns and kickoff returns, things were dismal. The low point came at home when a North Texas punt returner turned a fake fair catch into a 90-yard touchdown return that fueled a 44-17 defeat of the Hogs. This off-season, it’s clear head coach Chad Morris has acknowledged special teams as an issue. In turn, he’s gone after this weakness with the ferocity of a 60-pound Doberman.

To give incumbent punter Reid Bauer (who averaged 38.7 yards per punt in 2018) some competition he brought in transfer punter Sam Loy. In 2016, at Vanderbilt, Loy led all SEC freshmen with a 41.6 yards per punt average. But he’s also had problems with bungled snaps and shanked punts.

Morris also addressed special teams by tweaking his staff. Barry Lunney, Jr., who’s been a Hogs assistant since 2012, switched from coaching tight ends to assuming the new position of special teams coordinator. “Our special teams are a group effort,” Lunney, Jr. said. “It’s no different than offense and defense in a lot of ways. Joe Craddock doesn’t do everything in our offense. John Chavis doesn’t do everything in our defense. It takes a group of coaches to coach the scheme and responsibilities, so really that’s kind of how I see this and Coach [Chad Morris] sees it the same way, kind of having a point man that oversees a lot of those areas.”

At Lunney’s side will be new Arkansas assistant Daniel Da Prato, who’s had years of special teams coaching experience in Division I. Last year, at Colorado, Da Prato helped coach a special teams unit which led the Pac-12 in opponent kickoff returns and opponent punt returns, while ranking fourth in the conference in punts and blocked kicks.

It’s no stretch to predict Arkansas will be in a few close games this year.

It’s almost a sure bet special teams will play a big role in at least one final margin of victory or defeat. In a season that’s expected to put the Hogs on the brink of a bowl berth, every special teams gaffe committed (and prevented) counts.