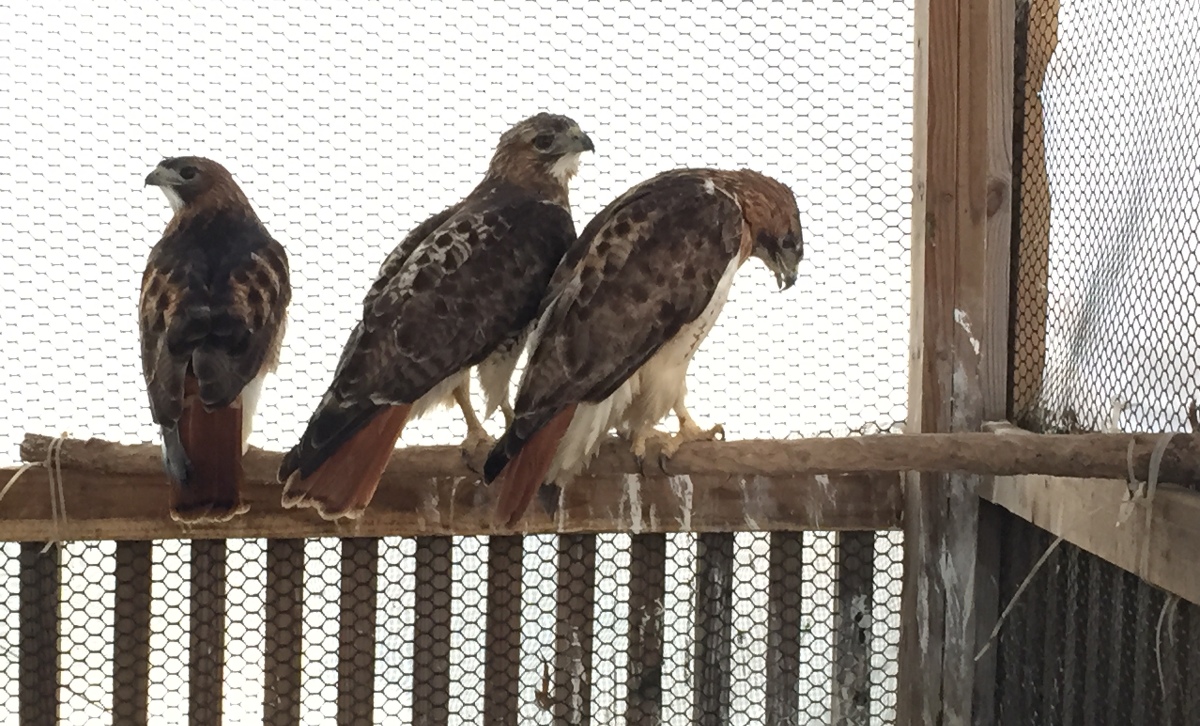 If you’re like me, you may not have even known that the Raptor Rehab of Central Arkansas even existed until they were recently in the news for their work rehabilitating and releasing back into the wild a bald eagle that had been shot in January 2015.

I recently visited with Rodney Paul, owner and operator, and his wife Melissa to see their work firsthand.

Paul began his work with birds of prey many years ago as a volunteer with the Little Rock Zoo. About 13 years ago he became independent of the zoo and opened the Rehab Center right in his own backyard.

The Raptor Rehab services an average of 200 birds of prey per year. It is licensed under the U.S. Fish and Wildlife Service, but is operated mainly out of Paul’s own pocket although they do receive some donations each year to help defray the costs. Paul estimates that his costs average about $10-12,000 per year to care for and feed the birds and to maintain the flight pens and rehab pens for the birds. Sadly, a very important flight pen was heavily damaged by the recent snowstorm and had to be demolished. Paul plans to begin rebuilding as soon as possible, depending on funds.

The process for rehabilitating a bird varies depending on the situation of the individual bird but usually begins with a visit to the local vet for an exam and x-rays. Once a diagnosis is made treatment can begin. Treatments can vary from surgery, to confinement, or just a few days rest depending on the condition of the bird. Paul’s goal is to ultimately release the birds back into the wild so he tries to keep physical human contact to a minimum; only contacting birds that need extended medical treatment. For many of the birds, a period of confinement to rest and heal is all that is needed. Each bird’s stay can vary in length but the average time at the facility is around two months.

Paul said that about 95 percent of the birds he sees are injured do to human interaction. Many are hit by cars. Paul highly recommends that individuals who believe they have found an injured bird contact Arkansas Game and Fish or himself for advice first before handling or moving a bird.

Paul warned that he sees an influx of birds this time of year due to people mistaking fledgling birds as injured birds. During the spring, as birds are hatching eggs and teaching their young to fly, it is not uncommon to see fledgling birds on the ground. Fledgling birds are still under the care of their parents and are still learning how to fly properly. Mistaking a fledgling bird as an injured bird could ultimately have a detrimental effect on the bird and could actually lead to it being euthanized or forced into captivity due to imprint or loss of understanding of its natural habitat. Melissa Paul, Rodney Paul’s wife, suggested that individuals watch such birds from a distance to ensure that it is safe from any predators (most likely dogs and cats) rather than handling the bird. In most cases, the bird will return to flight after a period of rest.

During my visit, Rodney Paul was in the process of rehabilitating three owls, three red tailed hawks, and a vulture; each of which will be released back into the wild. On March 14, Paul released a young bald eagle which had been in his care since early January. The bald eagle had been shot by an individual and had suffered an injury to its wing. Many birds of prey, most specifically bald eagles, are federally protected and there can be stiff fines for intentionally injuring or attempting to capture such birds. The bald eagle was de-listed in June 2007 and was no longer considered an endangered or threatened species in the lower 48 states. Special permits are required to keep a bald eagle, even for rehabilitation, and Paul currently holds the only bald eagle permit in the state.

Just being a few feet away from these birds was a magical experience. Nothing compares to seeing them in person and you really get a sense of why it is important to protect them and care for them when they are unable to care for themselves. Rodney Paul loves what he does and it is evident in his attitude and demeanor.

Birds are wild animals and should always be treated as such. Rodney Paul stresses that contact with any wild animal should only be done by trained professionals. If you find a bird that you believe is in danger you should always begin by contacting Arkansas Game and Fish (AGFC). They will be able to ask questions that will determine if further care is necessary or possible.

Learn more about The Raptor Rehab of Central Arkansas and how you can be a part of its mission by visiting their website.  If interested in hosting an educational program about birds of prey, you may contact the Raptor Rehab through information found on their Facebook page. They currently have several dates available for programs.

While Christmas and Thanksgiving may get all the publicity, Easter is one...

Grilling season is here and one of the best outdoor grills is made right...