The Best of Fayetteville

Take a Trip Through History at Devil’s Den State Park 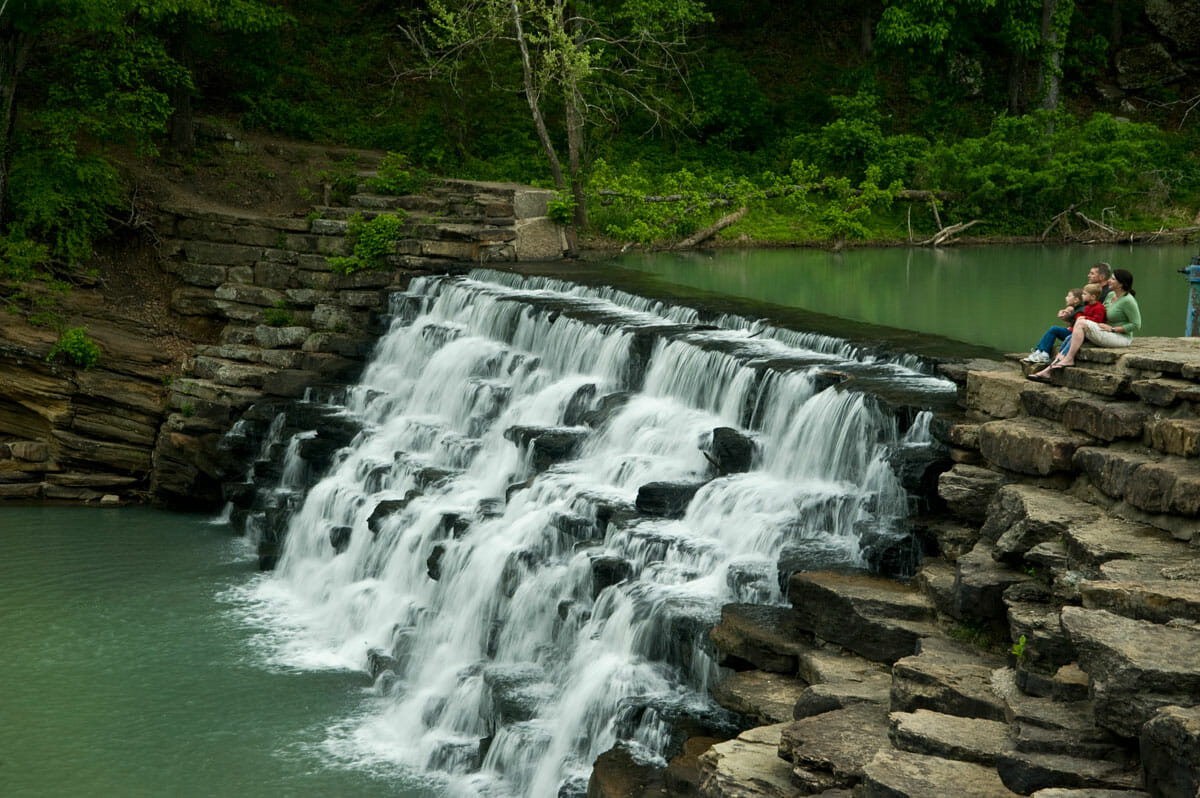 I have a fond memory of visiting Devil’s Den State Park as a young child, but when my parents told me where we were spending the weekend, I trembled. My young mind worried over what kind of devil might dwell there. As we wound around the high curves of Highway 170 and descended into the wooded valley to our little rock cabin, my fear fell away. I couldn’t wait to see what adventures awaited me.

A visit to Devil’s Den State Park is a walk through Arkansas history. Lee Creek Valley, which contains the 2,500-acre park, is deep in the hills of the Ozark Mountains and holds the largest formation of sandstone crevices in the United States. The steep bluffs, crevices and caves formed when layers of sandstone slid into the valley thousands of years ago. The bluffs offer a view of the earth’s history in its stacked layers of sandstone, limestone and shale. Fossils of crinoids, or sea lilies, are found along Lee Creek, which cuts through the park.

European settlers arrived in the area before Arkansas became a state in 1836 and continued to settle in. Hikers can still see evidence of the town of Anna on the Devil’s Den Trail and remnants of other homesteads can be found across the park.

The park owes its name, Devil’s Den, to its approximately 60 crevice caves. Long held rumors say outlaws used these caves and the steep terrain surrounding them as the perfect hideout. From 1858-1861 the Butterfield Overland Stagecoach carried mail and passengers from Tipton, Missouri to Ft. Smith, Arkansas on its way to San Francisco. The route ran less than 5 miles from Devil’s Den, possibly providing outlaws with the opportunity to rob the stagecoach. Whether the rumors are true or not, the name stuck. During the Civil War, use of the area as a hideout continued as Southern bandits staged attacks against Union soldiers to garner supplies.

The Civil War ended, but the park’s notorious reputation continued into the 1900s. Two brothers, Otis and Otto Dotson, were accused of burning down the local school that served the homesteading families in the valley simply because they no longer wished to attend classes. In the 1920s and 30s, one of the caves once again allowed for shady dealings when it was used to make and store moonshine during Prohibition.

The 1930s brought a vast change to Devil’s Den that shaped the park into the one we know today. Franklin D. Roosevelt created the Civilian Conservation Corps to employ thousands of men in public service projects during the Great Depression. Devil’s Den was chosen as one of the sites in Arkansas to create a state park.

October 20, 1933, construction began in the park. First, the men built a campsite to house the corps of two hundred workers. Once the camp was up and running, they started their first construction project, a pavilion at Yellow Rock overlooking the beautiful valley. From 1933-1942, hundreds of young men participated in building rock cabins, a road into the park, a dam that created eight-acre Lake Devil, several bridges and many trails. Though the bridges washed away and had to be replaced with modern bridges, most of the CCC’s work remains. Today, Devil’s Den is recognized as one of the most well preserved CCC sites in the U.S.

Since the sandstone layers first slid into Lee Creek Valley thousands of years ago, Devil’s Den has been one of Arkansas’s most interesting and rugged areas. Thousands of people have visited the park since its inception in 1933.

You can easily walk among the history of the park. Look for fossils in Lee Creek and you might find evidence of ancient creatures and plants. Stay in a rock cabin, hike a trail, or paddle a canoe and enjoy the history of the CCC. Though Devil’s Den caves are currently closed to the public, you can peer at an entrance and imagine what it was like to hide out inside one.

As you hike up the steep trail to Yellow Rock overlook and the CCC pavilion, imagine how Native American hunters traversed these lands in search of food. At the lookout at Yellow Rock, you’ll see the Ozark forest and mountains stretching away from you, much of it still the same as it was when the CCC built the park, when outlaws and homesteaders called Devil’s Den home, and when Native Americans tread here.

Devil’s Den is located 8 miles south of Fayetteville off Arkansas Highway 170. Visit arkansasstateparks.com for more information on how to enjoy this beautiful and historical park.

More information on our favorite Arkansas State Parks can be found here.