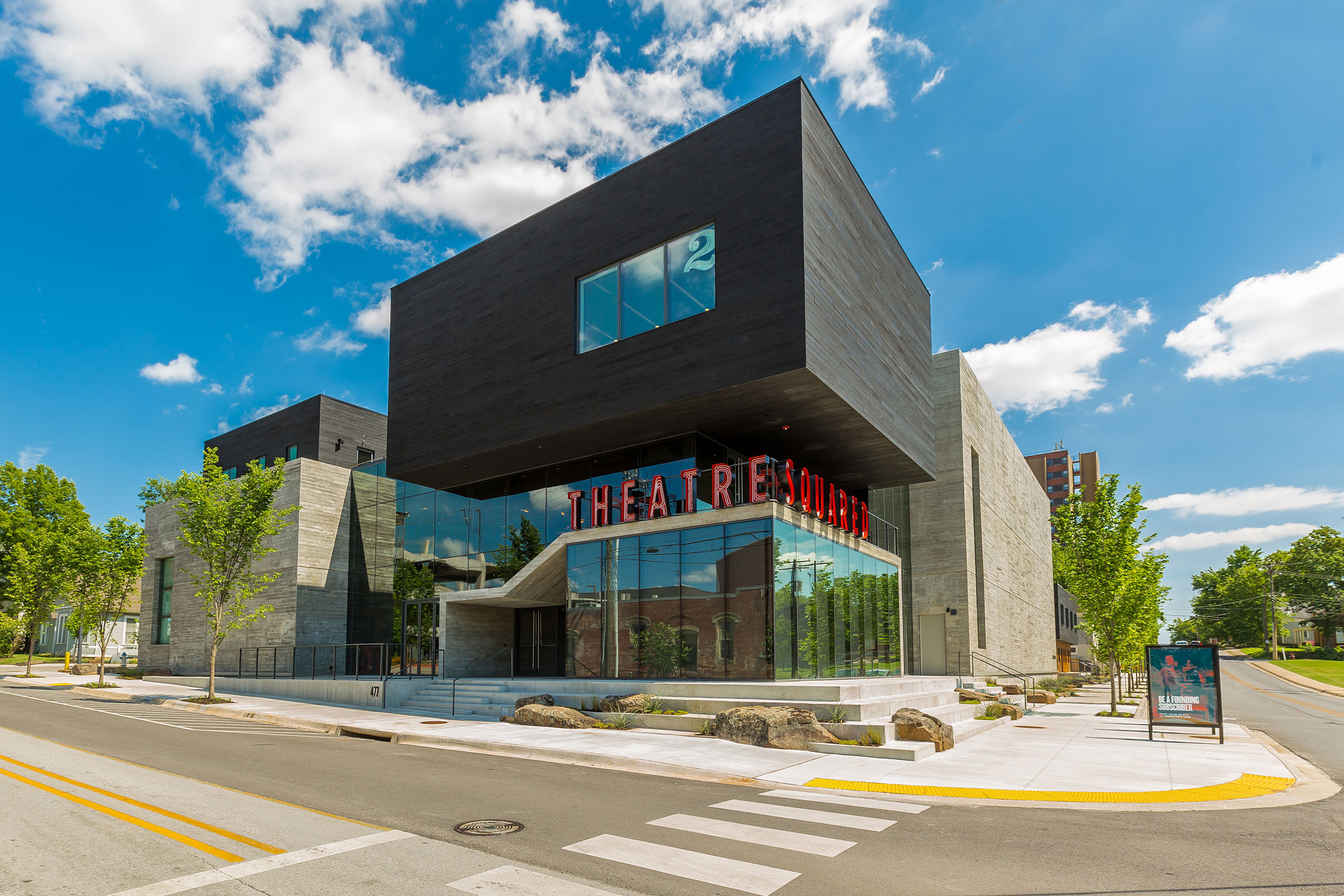 And it should, considering the finishing touches are currently being applied to the brand-new, purpose-built theater complex on the southeast corner of Spring Street and West Avenue in Fayetteville. Slowly but surely, the $34 million project (a price that includes construction costs and an educational reserve fund) nears completion.

Several milestones have recently taken place for the new home of TheatreSquared, where construction on the facility broke ground in June 2017. Theater staff members, still wearing hard hats at the time to access certain spots, moved in to their new offices this February. Funding for major portions of the project were announced in June. The facility hosted an introductory black-tie gala in late June for donors, and other visitors are now trickling in as well as the final preparation are made.

The Fayetteville Flyer was given a tour of the progress on July 11 in advance of two other upcoming milestones – the Aug. 8 opening of The Commons, the café/coffee shop/bar/hangout on the first floor, and the Aug. 14 premiere of “Shakespeare in Love,” the company’s first show in the new space. Single tickets for that show are on sale now through the TheatreSquared box office. The box office, located on the first floor, is newly independent from that of the theater company’s former landlord/partner, the Walton Arts Center. The box office will be accepting walk-up customers in the new space on Aug. 8, the day the doors officially open to the public.

Beyond the distinct smell of ‘new’ which greets you as you walk inside, the 50,000-square-foot TheatreSquared building looks new – and fresh, well-designed and modern. It was designed via a partnership between Marvel Architects of New York City, who have designed several living spaces in the New York City area, and Charcoalblue, known for their work in theater and venue design. Local architecture firm Modus Studios stepped in to design custom furniture pieces, such as wooden benches made from trees felled to make way for construction.

Local is a distinct theme for the venue. Walls for the smaller of the two theater spaces, the 120-seat Spring Theatre, were made by pouring concrete into forms made of Arkansas pine, which give the walls a rippled, distinct appearance. The form boards, once cleaned, were then stained and added elsewhere to the walls. Locally sourced food will be served in The Commons, which is meant to serve as a daytime hangout even – or perhaps especially – on days when no shows are taking place in the theaters. Local beers will be served from the 16 taps in The Commons café, although some of the taps are reserved for wine and pre-made drinks.

The building features several nooks for viewing theater elements or the city of Fayetteville itself. A third-floor, open-air space between the full-sized rehearsal area and the administrative offices, with views of Spring Street below, is destined to be a popular spot. This area is accessible to the public, as are many of the spaces in the theater.

Community collaboration and community-making are critical to the design elements of the new space, said Joanna Sheehan Bell, Director of Marketing & Communications for the theater company. Illustrating this idea is the stairwell that leads upwards from The Commons. The wooden and concrete staircase features landing areas large enough for groups to sit on benches, and the entire area is wired for lights and sounds so that a performance could be staged right in middle of the open area bounded by the stairs and the glass walls that separate the area from the intersection of Spring and West.

One response to “First Look: TheatreSquared in Fayetteville”