Irony is the Protagonist for Author James Babb 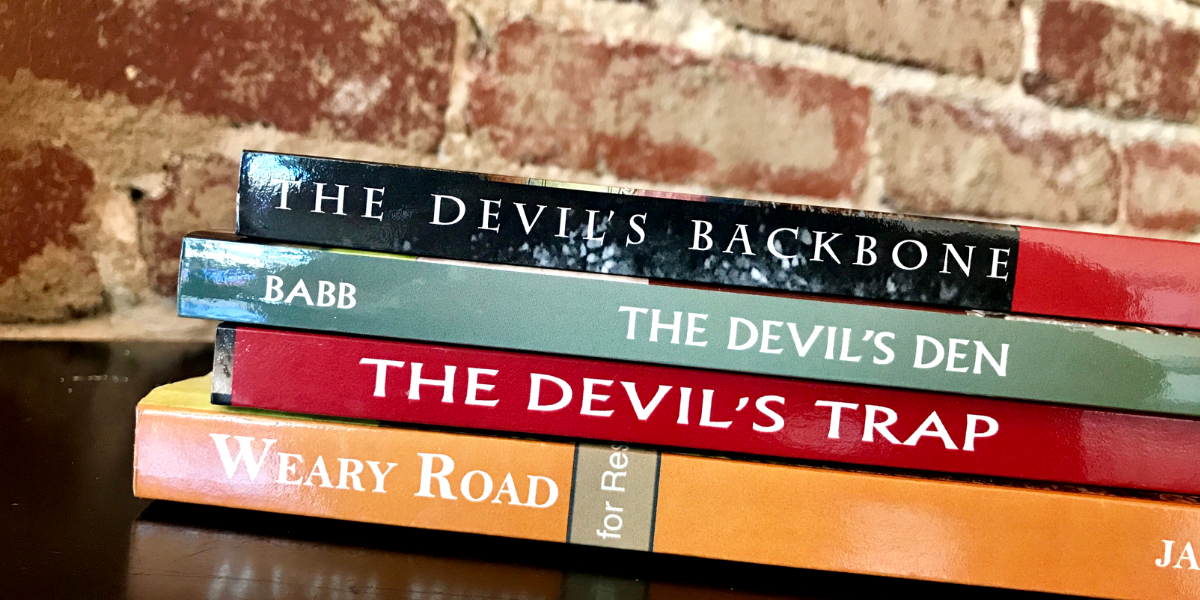 Quiet and unassuming as he carries and conducts himself, Arkansas author James Babb would tell you his story is even more simple than his demeanor.

“God has a good sense of humor. When I was young, I hated reading. I was a reluctant reader; I had only read through five books when I graduated high school. History was my worst subject, and I flunked it in college. Public speaking was my biggest nightmare. But today I write historical fiction, which requires a lot of research and reading, and do a lot of public speaking to thousands of children in Arkansas each year and at writers conferences.”

While he was not reading much as a kid, James Babb did love adventure, and his creativity ran wild all on its own. Writing was something Babb always wanted to do; he just never found the time. As a young adult, he started his first business at 22 and has been running his businesses and chasing entrepreneurial opportunities along the way. As a dad, he never really read stories to his children; he always just told them the story in his heart or on his mind. And, they were some wild tales!

It wasn’t until a few years ago, when he received a cancer diagnosis, that he finally found the time needed to slow down, focus and concentrate. Writing became a helpful distraction as part of the recovery from his treatments, and Babb began putting on paper the story he had been wrestling in his mind.

That story began in a deer stand. Hunting in the woods offered him a space for extra time to sit. We can suppose that fishing provided the same opportunity for his mind to wander. “I wondered what would happen if I fell out of the deer stand. Would I hurt myself? How would I get out of the woods on my own and get back to someone or safety.” These were all things that Babb would think about, and then he would take those thoughts one step further. “I began to think about what it would be like to hunt these woods decades ago before we had technology. Or in the early 1900s or as a young kid following the Civil War.”

Babb’s first book, The Devil’s Backbone, is the story of a young boy named Brody and begins in the summer of 1880. Brody comes from a farming family who lives on land outside Fort Smith that has been owned by multiple generations. We meet him on an evening as he overhears a conversation between his parents who have fallen on hard times; their crops have dried up, and the woods seem to be empty of wildlife. Brody believes in his “secret” spot in the woods and sets a plan to go hunting the next day to find food for the family. Through a series of events on his hunting adventure, a man living in the woods finds him, and a relationship begins. Initially, the man thinks the young boy is a Union scout. The man has been in the woods since his days as a soldier and thinks the Civil War is still going on almost two decades later. A story begins to unfold.

James Babb likes to include as many historical facts as possible without making it too time-period heavy. His focus is a young fourth to sixth-grade reader; especially the young, male, reluctant reader. During that time of his life, he was looking for adventure and action and never found it in a book. He hopes the hook he weaves into each story will capture the adventure-seeking young man and stir in him to keep reading. Along the way, Babb hopes that the reader will pick up and learn some of the historical facts he includes as a byproduct of the story.

Several school districts in Arkansas have included Babb’s stories as part of their fourth-grade curriculum. He is asked by different districts to visit and share with students. He prefers the classroom setting where he can bring in a Civil War trunk and introduce the students to how different life was for a child growing up in the middle 1800s, sharing with them the difference between their life then and life now.

The Devil’s Backbone is part of a three-part series that includes The Devil’s Trap and The Devil’s Den. The series has won six awards including the Arkansas Historical Association’s Susannah De Black award. This is the only fiction award given to Arkansas authors, and his first and last books in the series won the awards in 2015 and 2018 respectively, making him the first author ever to receive the award twice.

Babb’s next project, due out this summer, is based on the true story of a dog who took up with the 1865 13th Illinois Infantry troop in Salem, Arkansas. Through research for his previous series, he came across the untold story of a dog and the men who cared for him. Through research and reading individual soldiers’ journals, Babb has pieced together a story of a man and his dog, of lifesaving measures and historical facts surrounding the battles and journeys of this famed group.

While Babb sometimes relates to his character; the curiosity of a young boy, the sarcasm and strange humor of an old soldier, fear and concern of a parent; it is for the reader he is most concerned. Babb seeks to connect with that reluctant reader; the one who only sees books as something they are forced to do because of school or parents. The part of his job he loves most is being out and talking to school groups.

Babb keeps a blog on his author website where you can learn more about his travels and the research he is conducting. And dig deeper into some of his characters and the real characters they are based upon. His books can be purchased through Amazon, Barnes, and Noble, or directly from his publisher. Be watching for the release of Weary Road later this summer.

James Babb offers a few tips for others who are considering writing a book:

Cover image by Keisha McKinney. All other images courtesy of James Babb.

School has started, and leaves are beginning to change colors, signs that...

Over the coming decade, the Arkansas Trucking Association predicts that...

Serendipitous is the best way to describe Rock Town River Outfitters and...

One response to “Irony is the Protagonist for Author James Babb”