Embark on a Treasure Hunt in Downtown Hardy

5 Places to Dine on the Water in Arkansas 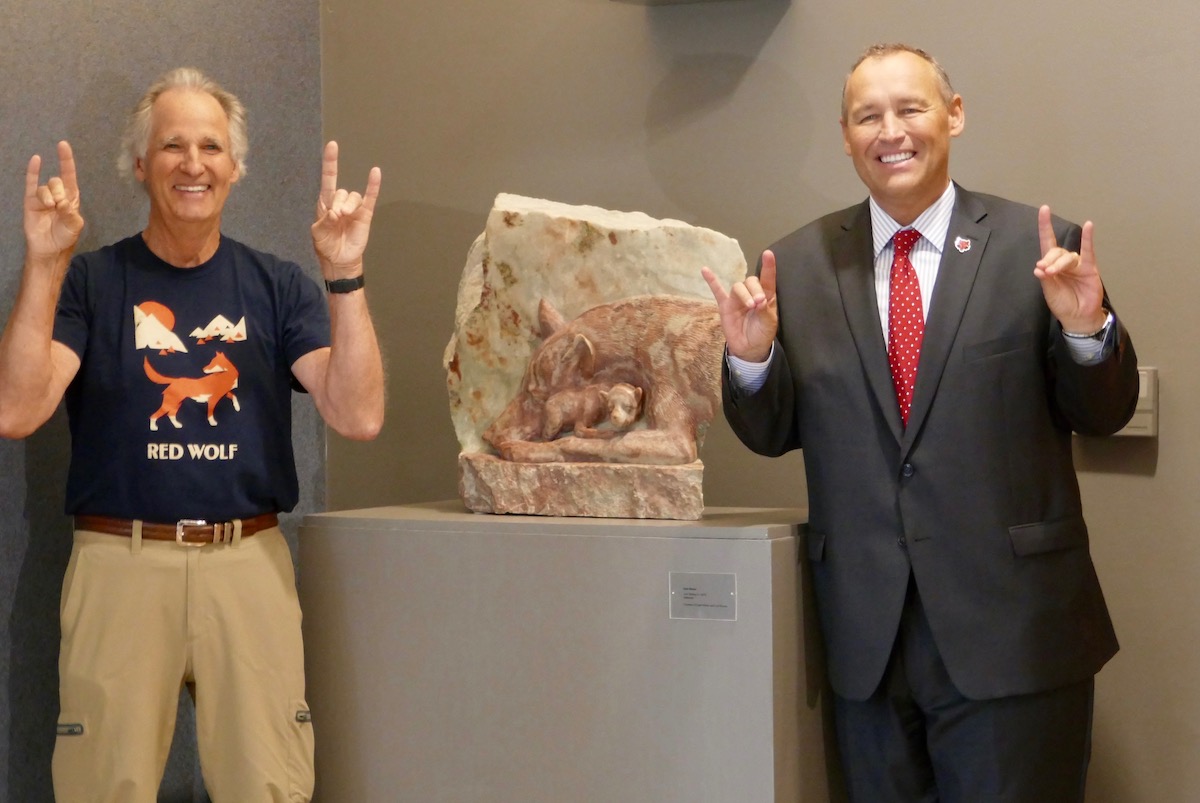 Dale Weiler and his wife, Loti Woods, collectively known as “Weiler Woods for Wildlife,” selected Arkansas State University as the new home for his sculpture, “Just Settling In.” The stone piece with shades of red and coral depicts a mother red wolf cuddling with her pup. Prompted by the university’s commitment to educating incoming students about the wolf species, the North Carolina artist brought his piece to the Bradbury Art Museum at the university in Jonesboro.

“Just Settling In” is settling in quite nicely.

Although red wolves aren’t roaming the forests of Arkansas, Arkansas State University selected the nearly extinct animal as their mascot 10 years ago.  Weiler’s work couldn’t have arrived at a more pivotal point in the rush to save the critically endangered red wolf.

The sculpture will be on display for at least two years. Unlike many artists who create art, hoping that their love for a subject or medium leads to at least a few profitable sales, Weiler Woods donates 100% of each sculpture’s proceeds to wildlife causes. Many of their pieces are also loaned to museums and other organizations that promote conservation and awareness.

Dale Weiler’s love for the outdoors stems from his childhood summers spent traveling the US and Canada with his father. His father would load them up each summer to camp, hike and fly-fish. The time spent in the outdoors viewing wildlife and taking in some of the most beautiful scenery in North America taught Weiler to have a deep appreciation and respect for nature.

Weiler’s father MC Weiler, a teacher by trade and professional watercolorist, also shared his passion for art, only it came with a caveat. Believing that the life of an artist would be too difficult, he encouraged his children to seek careers in other fields. His mantra was so ingrained into his children that Weiler waited nearly 20 years following his father’s passing before he began to make art regularly. He finally discovered his passion for stone carving in his 50s after learning about it at the Maine School of Art.

Weiler and Woods met by chance about four years ago and immediately fell in love. Both in their 60s, they were engaged eight days after their first date. When they married, they decided to bring together Weiler’s love of sculpting with their joint passion for wildlife to raise funding and awareness for endangered animals around the world. Recently their passion and efforts have surrounded the red wolves and led the couple to bring their art to Arkansas.

The two had the opportunity to meet the red wolves at the North Carolina Zoo. They were captivated by the beauty of the animals and concerned about their dwindling numbers; as of today, only 14 red wolves remain in the wild. Weiler said when they left, “I had to see if there was [a red wolf] hiding in a piece of stone I had.”

Weiler’s process is to collect stone and wait for the stone itself to tell him what it wants to be. He may get an idea as he did with the red wolf, but he can’t force the ideas into a particular piece. Weiler says he doesn’t draw well, but when he considers the form, shape and coloration in a piece of rock, he can just “see” it. The piece of Utah alabaster that became Just Settling In had been in his collection for over a decade. When he revisited it, he immediately saw a mother wolf and her pup.

He then spent hundreds of hours in research, looking at numerous photos of red wolves to prepare for sculpting. Weiler must really know his subject matter; working subtractive (removing parts to create a finished piece) doesn’t allow room for mistakes. Woods told me her husband spends so much time in research that when he begins, he could probably sculpt with his eyes closed. His goal is not just to create a likeness, but to impart reality and personality into his piece.

Weiler wants his art to speak to the viewer and inspire the public to take action.

In the case of the red wolves, he says, “Time is critical. We are on the brink of extinction and need to act now. We are way past the time to learn about what we can do to save the red wolf. We just need to do it. Now!”

Weiler understands that his work alone will not save the species, but his work is opening doors to talk to the people who can influence change. The university is working to combat fear associated with bringing back the red wolf with education, including a freshman course requirement. The Secret World of Red Wolves class is designed to educate every incoming student about the issues surrounding the wolves and provide students with tools to facilitate change. The university is also home to The Arkansas Center for Biodiversity Collections which serves as the national specimen bank for blood and tissue samples for red wolves and processes the remains of deceased red wolves.

“Just Settling In” will be on display at least for the next two years at the Bradbury Museum and possibly at other locations around the Jonesboro area. To expand the impact of the piece, 10 castings were made from the original work and are being placed at different locations around the country.

Weiler and Woods encourage people to go out and view the artwork and learn about the species. They hope to spread the word that there has never been a red wolf attack on humans. They want people to see a creature that mates for life and cares for its young in such a tender way. The couple hopes to inspire people to learn and understand the different perspectives about red wolves and speak to legislators, individuals and agencies who can influence change.

While they are involved in a few other projects, they remain entrenched with this cause. As their primary focus, they will continue to support the effort with additional castings, making appearances at red wolf events and giving talks. They are in it for the long haul, and their goal is to see the wolves back in the wild.

When asked if there will be more red wolf sculptures, Weiler responds with an air of mystery and anticipation.

BAM is not open on Mondays, between exhibitions or when the university is closed.

If you are a parent, there is nothing worse than your kids saying...

Jonesboro is the home of Arkansas State University which draws many...

One response to ““Just Settling In” to Save the Red Wolves”