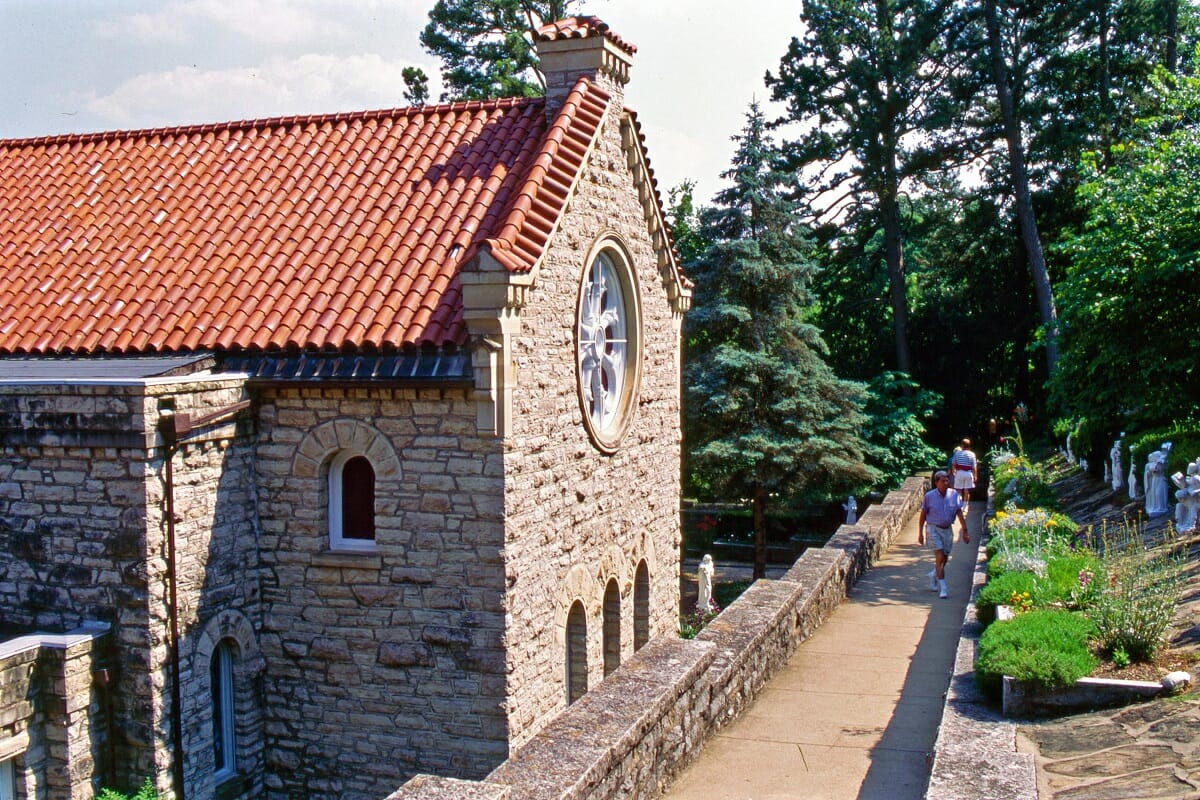 If you walk through the red-carpeted lobby of the Crescent Hotel, past the limestone fireplace bedecked with stone owls, through the towering French doors, and onto the sweeping back porch, you’ll find a fantastic view. The hotel grounds are perfectly landscaped and harken back to Victorian times where women walked with parasols and tea was served. But just below the Crescent Hotel, if you walk to the back of the grounds, or stand on an upper balcony, you’ll see a small domed building. If you stand there long enough, you’ll hear the chimes ring out songs across the Ozark mountains. It will no doubt make you pause where you stand, as the birds chirp and the bells ring. It is, without a doubt, a breathtaking combination.

The Catholic Church situated just below the Crescent Hotel is St. Elizabeth’s, a domed structure inspired by the Hagia Sophia in Istanbul. Indeed, it does bear resemblance in miniature, with its architectural resemblances to the famed Sophia (a cathedral built in modern day Turkey, but what was once Constantinople in the sixth century A.D.) I’ve always felt like the Crescent and St. Elizabeth’s were two beautiful siblings, seated high above my favorite town and imbued with a magic not found in many other places.

As you walk down the stairs below the Crescent, you’ll see a marble statue of St. Elizabeth of Hungary, the patron saint of the bakers, beggars, brides, charities, death of children, homeless people, hospitals and widows. As you pass through the bell tower, you’ll walk down stairs and through a pathway, where cicadas hum during the heat of the summer, you’ll pass foot-tall marble statuettes in Italian marble illustrating the Stations of the Cross. Beautiful gardens surround the church entrance.

As you enter through the heavy wooden doors, it feels as though you’ve entered into another time period, or perhaps journeyed back to Tuscany. The ceilings are pink, the candles are red, and no matter your religious affiliation, you’re filled with the certainty that this place was meant to be a room where you can take a deep breath and seek some solace from your burdens.

Richard Kerens, one of the builders of the Crescent Hotel, built a chapel in dedication to his mother, Elizabeth, on the current site. After discussions with Catholic officials, Kerns added the church building, and the chapel became the vestibule. St. Elizabeth’s was dedicated in 1909 and has remained in continuous use to this day. The exterior construction was built out of the local limestone seen all around Eureka Springs. Kerens imported marble and flooring from Italy. The chandelier that hangs from the main dome has over 7,000 crystals and 19 interior lights. The church’s distinctive entrance, the bell tower, is the only way to enter and earned the building three mentions in Ripley’s Believe It Or Not in 1931, 1953, and 1961.

As years passed the church faced deterioration due to improper heating, and in the 1950’s, Father Joseph Lauro led efforts for extensive restoration. These restorations included work done by members of an Italian artists’ society and sculptor Checchi Mario.

Today St. Elizabeth’s is listed on the National Historic Register and is an enduring Eureka Springs landmark. Like so many hundreds of visitors before me, it once served as a quiet place of reflection for my own busy mind. I’m a Protestant, but as I entered the garden in the long shadows of a summer afternoon, and sat in the pink-lit sanctuary at St. Elizabeth’s, I felt very welcomed in the tiny church. The warm, unique, historic, and quirky aspects of Eureka Springs abound, but the bell songs of St. Elizabeth’s, underneath the shadow of the Crescent Hotel, are pure magic.

To find out more information about the church, including historical photos, wedding opportunities, and gift shop, you can visit their website at http://stelizabethar.org/.