The Unknown Baby Girl: In Death She Belongs to All of Us 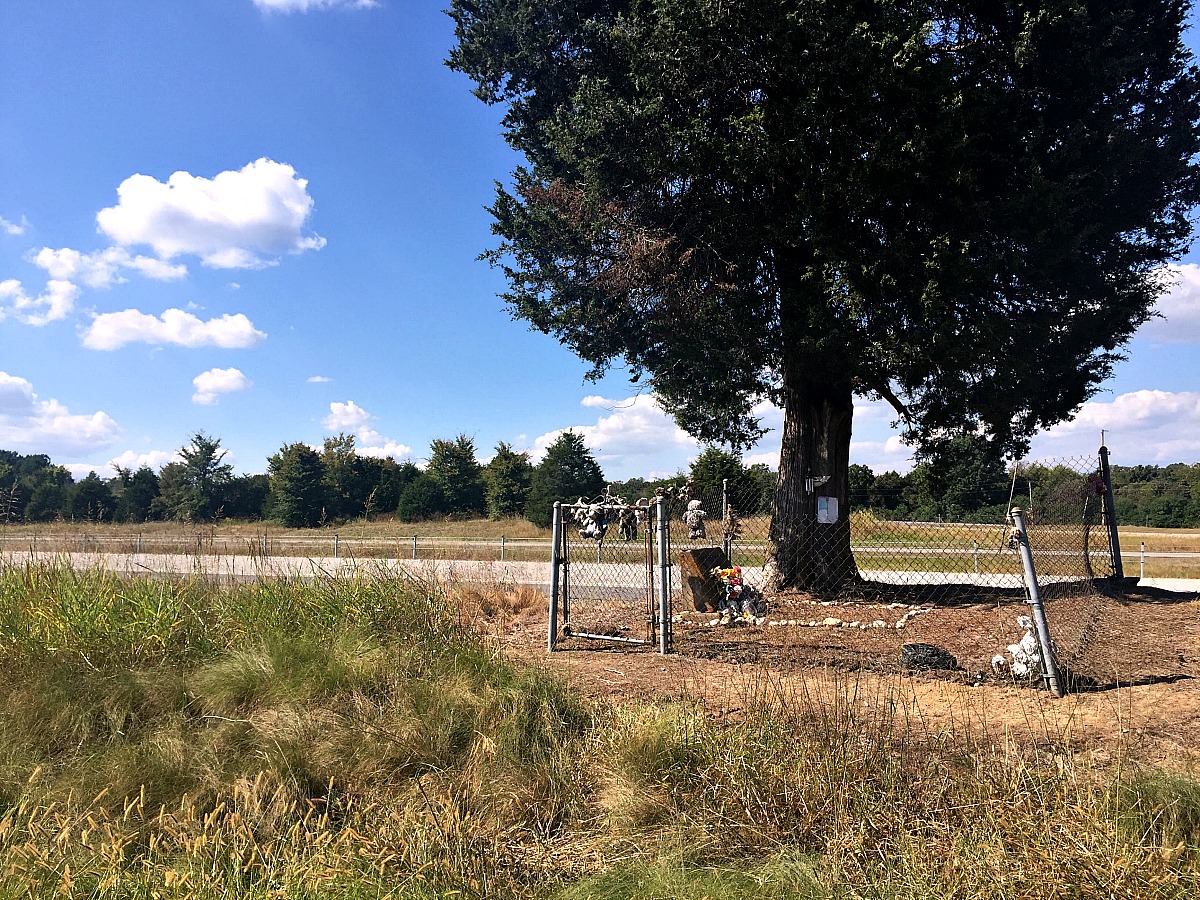 It has been said that it takes a village to raise a child. Similarly, a small town in Arkansas has adopted the grave of an unknown baby girl and continues to care for it and visit it over 130 years later.

Along Highway 67N in Judsonia, a little grave sits beside an old cedar tree. The grave is not part of a cemetery but a lone burial plot situated on an Arkansas Department of Transportation (ARDOT – formerly AHTD) right of way between the northbound entrance ramp and the highway. A single grave marker contains the inscription, “The Unknown Baby Girl – In Death She Belongs to All of Us.”

When planning for the highway began in the late 1960s, residents of Judsonia contacted the Highway Department to notify them of the grave and it was decided that the highway would be designed to go around the site. According to Bruce Street of the ADOT, moving the grave site was never an option that was considered as that would be much more costly than simply planning around it.

A small stone marker was added and a fence was erected to protect the site. Although Street was just a toddler himself at the time the highway was built, he said the site went unmaintained for several years until the Greenskeeper’s Garden Club took over maintenance. He believes they may have even raised the funds to purchase the headstone which now marks the grave.

In 1977, just after the new highway opened, people began to notice the grave and started asking questions. The “Highway Roadside Mystery Grave” was a hot topic in the community. W. E. Orr, who served as president of the White County Historical Society in the mid-1960s and was then working as editor of the White County Record, began researching the site. Although Orr died in 1997 at the age of 86, his legacy lives on through his research. Much of the following information is based on his findings.

It was determined that the lone grave was dug when a small girl died in approximately 1890 or 1891. Nearly 100 years had passed and little written history was available so Orr set out to find people who had grown up in the area and might know something.

As can be expected, when it comes to any local mystery, stories abound. While many locals hold their own opinions, no one really knows the truth. Adults who grew up in the area can recall playing around the grave before the highway came through. The story of the girl became something of a local legend and a tale that was possibly twisted over time and maybe even with the intent of scaring local children or merely stoking their imagination.

According to local legend, it was not uncommon for tribes of Native Americans to pass through the area. On one such journey, a young princess traveling with a tribe became very ill. The group went to the home of a local doctor, Dr. S. H. Burkhausen, whose young daughter was home alone and later recounted this story to Mr. Orr.

The group set up camp along the outskirts of town where the child died in the night. It is unclear if they ever visited the doctor.

Although much of this story is likely true to this point, what happens next is unclear and it is probably unlikely that the grave is actually that of a Native American Princess. Legend maintains that the Native Americans took the deceased princess to the area in question and buried her beneath a cedar tree on the third of July. The group supposedly returned for many years, performing some sort of ancient ceremony around the burial mound much to the wonderment of local residents. According to the doctor’s daughter, the Native American’s stopped coming to the area in the early to mid-1900s.

Daughter of the Farm Tenants

The most likely story that has been circulating is that the little girl buried in the grave was the daughter of poverty-stricken migrant farmworkers. The land where the highway now sits once belonged to the Bunte family and was used for farming. Records do not indicate what type of farming was done there but the strawberry trade was slowly growing in the area at the time. The farm took on tenants to help with the farm work and the family in question is believed to have been named the Cousins and some records refer to the grave as the Cousins Cemetery.

As the story goes, the young toddler of the family was enjoying her dinner perched in a highchair beside the family table. The highchair was very rickety and the bouncing toddler managed to topple the chair.

The story gets a little muddied at this point. According to some, the little girl fell and as she did a knife was knocked off the table along with her and she landed on it, dying instantly. According to other versions, the girl was just learning to feed herself and was holding a fork in her tiny fist. When she fell, the fork stabbed her leading to her death.

The family was said to be so poor that they could not afford to bury the girl in the local Evergreen Cemetery. The family and perhaps some members of the community worked together to dig the small grave. A crude coffin was fashioned and the child was buried. Owners of the land created a small shrine and planted flowers which grew prolifically for years to come until the land was cleared for the highway.

The grave site is still maintained by the ARDOT. They see that the area is mowed and sprayed regularly to keep the weeds away. Many people will stop and place small trinkets beside the grave.

One local women who wished to remain unnamed told me she visits the grave once or twice a month.

“I had a child who passed at a young age. Burying her was one of the hardest things I ever did in my life. I know how those parents must have felt. To have so little in the world and to lose the thing you love the most…it’s nearly unbearable. When I visit my own child, I also visit this child. It brings me peace.”

Regardless of how or why that little girl ended up buried in that plot; it’s obvious that in death she really does belong to all of us.

Special thanks to the White County Historical Society, the Arkansas Department of Transportation and the Bald Knob Chamber of Commerce for providing information that aided in my research for this article.

4 responses to “The Unknown Baby Girl: In Death She Belongs to All of Us”