Arkansas Monuments to the Defenders of the Union 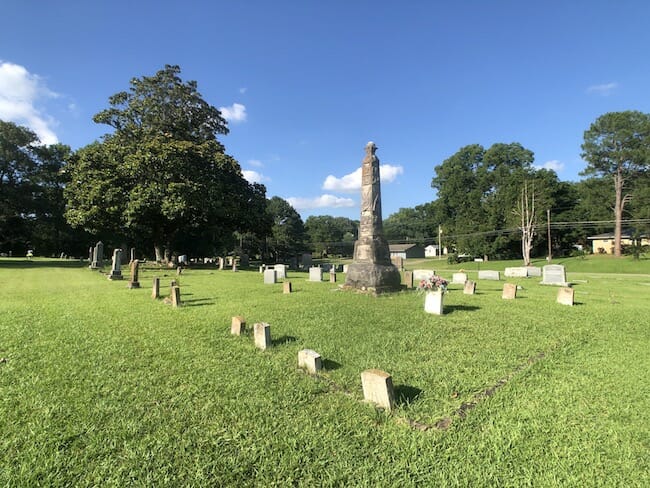 The Civil War has been referred to as a fight of brother against brother, and that may be said of the conflict in Arkansas, a border state where many fought for the Confederacy and some fought for the Union. When it comes to these historic matters, the Encyclopedia of Arkansas is a laudable trove of information. One entry on recruitment approximates 60,000 men served in the Confederate military and 14,000 in the Union, and another entry specifies over 5,500 men of African descent. Altogether, more than 10,000 Arkansans died in the war.

During the Reconstruction era that followed, the Grand Army of the Republic formed as a fraternal veterans’ association. Its goal was to aid the orphans and widows of Union veterans as well as promote the interests of veterans politically. The GAR established more than 100 posts throughout Arkansas and erected three monuments to honor Union soldiers.

GAR erected the first monument, shown in the accompanying pictures, in 1894 at Judsonia’s Evergreen Cemetery, where mature magnolias dot the property. The monument is carved from fieldstone, a tiered plinth mounted by a sphere-topped obelisk, with an inscription on the base recognizing the GAR post responsible for the monument and the reason, “In Memory of the Defenders of the Union 1861-1866.” The sides feature reliefs of crossed flags, crossed rifles and crossed swords. The graves of 12 Union soldiers are included in the monument’s plot, 31 feet square.

Although the monument was intended to honor Union soldiers specifically, it has been noted that the dedication ceremony in 1894 was treated as a scene of reconciliation, with veterans and families from both sides of the conflict present. The monument was unveiled by two daughters of Confederate soldiers as well as two daughters of Union soldiers, signifying unity in a community that had been divided by the war.

In 1918, a GAR post in Gentry erected a second monument. This monument is 18 feet tall, formed by three tiers and a bisected and sphere-topped obelisk carved from granite and inlaid with marble for the inscription which includes the legend: “to the heroes who fell or fought for the land they loved in the Civil War 1861-65.” David Kost, a native Missourian who had served as secretary to a Colonel Charles Harker during the war and afterward moved to Gentry, had founded this chapter of the GAR, calling it the Harker Post after his wartime leader. It is on his family plot in the Gentry Cemetery that the monument rests, atop a wide stone base. Kost and his family are buried nearby. The dedication ceremony in 1918 included Confederate and Union veterans, again as a sign of reconciliation and unity. Recently, in 2018, representatives of both the Sons of Union Veterans and the Sons of Confederate Veterans gathered in a ceremony to rededicate Gentry’s monument on its 100th anniversary.

The monuments in Judsonia and Gentry are in cemeteries and share space with the burial sites of veterans. GAR’s third monument to Union soldiers in Arkansas is located in Siloam Springs at Twin Springs Park, with a gazebo nearby. This monument is similar in appearance to the other two: a granite, 12-foot tall obelisk on a two-tiered plinth, with a bulb shape on top instead of a sphere. It was erected in 1928. The date is significant because it was later than most Civil War markers and well after the period of peak membership and activity for the GAR, but it indicates that the post responsible for the monument, the S. R. Curtis Post, was active at that time, and active enough to raise a statue.

Only one side of the monument features engravings, including the GAR star symbol, the year and post of the dedication, an acknowledgment of the National Women’s Relief Corps—the GAR’s women’s association—and the message, “Preserved by the Grace of God.” If the first two monuments are funereal, this monument, which turns its sole engraved face upon the water of Sager Creek, is reflective.

One response to “Arkansas Monuments to the Defenders of the Union”