0
Get Excited About Cheesecake on point!
Kevin Shalin

I have been keeping an eye on Cheesecake on point!, the...

The Encyclopedia of Arkansas 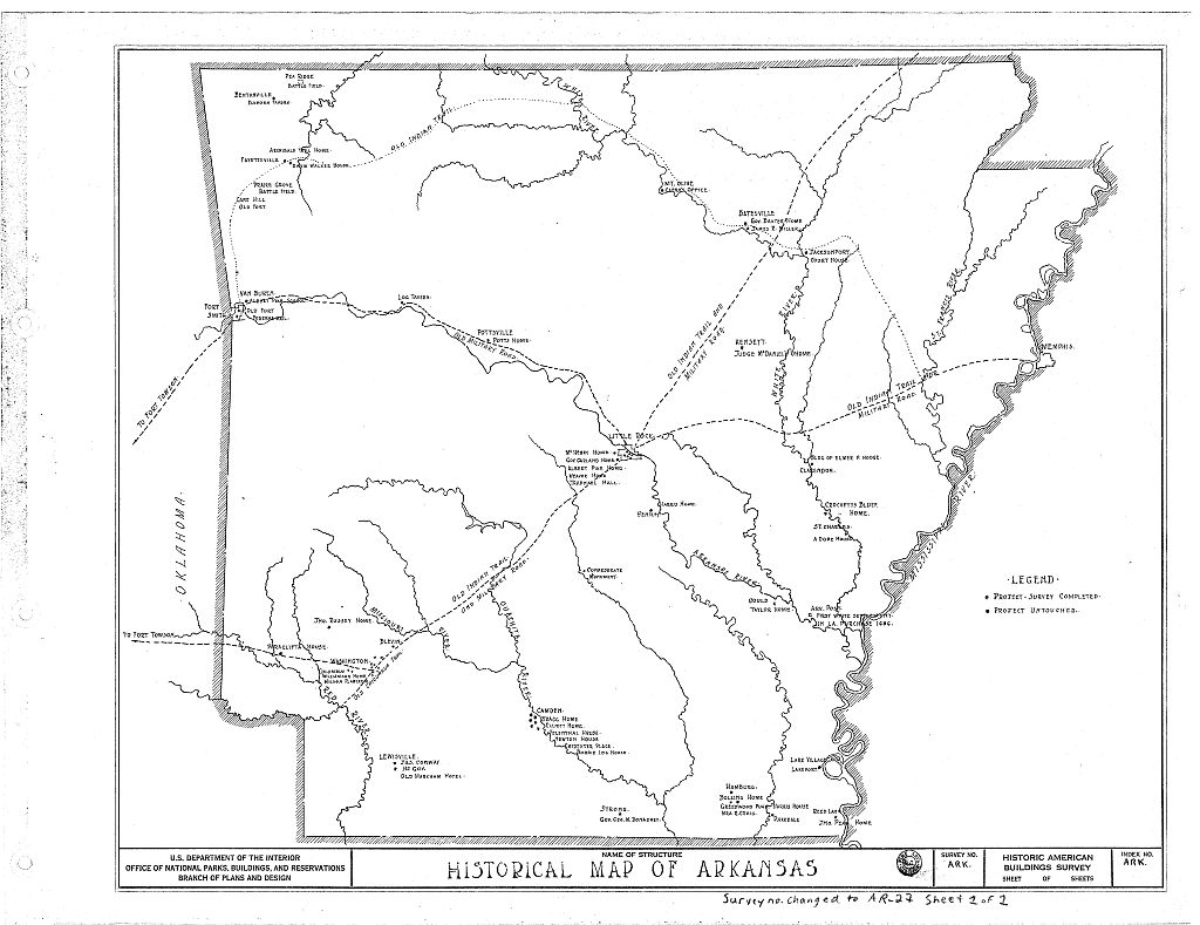 If you’ve ever had a question about Arkansas, whether it’s about history, famous Arkansans or little-known facts, the Central Arkansas Library System’s Encyclopedia of Arkansas is the most comprehensive online resource about the state.

In 2002, Tom Dillard, the curator for the Butler Center for Arkansas Studies at the Central Arkansas Library System, recognized the need for an online encyclopedia about the state. Dillard and deputy curator Tim Nutt began exploring how to create an online resource that was cooperative across many different organizations. They asked Jill Curran to help and the three held regional meetings to gather input from historical societies, county and regional museums, research institutions and other interested agencies and individuals. Curran was named project coordinator and Nathania Sawyer came on board as senior editor to the expansive project. The Winthrop Rockefeller Foundation awarded the CALS Encyclopedia of Arkansas Project a $1.28 million grant and other financial support followed from the Department of Arkansas Heritage and the Arkansas Humanities Council. By 2004, the project was able to hire staff who could recruit authors to write the encyclopedia entries.

In 2006, the CALS Encyclopedia debuted with over 700 entries plus 900 pieces of media, all centered around Arkansas. The encyclopedia would be a continual work-in-progress as new entries were added and older ones updated. For a young project, the encyclopedia was a hit. During its first month online, the encyclopedia had 47,000 visits to the site and 3.3 million hits within search engines. Current CALS Encyclopedia of Arkansas editor Guy Lancaster credits Nathania Sawyer as “probably the most influential of the editors of the Encyclopedia of Arkansas, overseeing the project from its initial grant-funded phase through its transition into a long-term project of the Central Arkansas Library System.”

The Encyclopedia of Arkansas currently has over 6,000 entries and 9,000 pieces of media. However, that number is ever increasing. Entries in the encyclopedia come from several different sources. Readers often suggest topics that aren’t included in the encyclopedia. These suggestions are evaluated and added to the list of entries seeking authors. Lancaster also says, “I or other staff will encounter particular ideas in the process of doing independent research, reading a book or article, or just skimming the day’s newspaper. We are always adding subjects to our list of entries needing authors.”

So how do potential authors write for the Encyclopedia of Arkansas? Again, the approach is varied. Some authors are experts on local history and approach the encyclopedia with ideas. Sometimes Lancaster reads an author’s article and asks them directly if they would write an entry on the same subject. Occasionally the staff at the encyclopedia will write entries as well. Authors for the encyclopedia are mostly from Arkansas, but some entries have been submitted from other states, Australia, the United Kingdom, Sweden, the Netherlands and even Kazakhstan. Interest in Arkansas stretches around the world.

In 1900, Thomas Cockburn brought over 300 ostriches to Hot Springs and opened the Ostrich Farm,
a tourist attraction that operated until 1953.

The entries themselves are quite entertaining. Of course, many of the standard entries expected in a good encyclopedia are there. The history of many Arkansas cities and townships, buildings, and famous citizens are included. However, the Encyclopedia of Arkansas also contains lesser-known entries with ties to Arkansas. Lancaster points to several of his favorites. Danielle Bunten Berry was one of the first computer game designers and a barrier breaker in the industry as a transgender woman. She invented several games, including the 1983 M.U.L.E., which was one of Lancaster’s favorite games as a child.

Another of Lancaster’s favorite entries is Pillstrom Tongs. If you’ve never heard of Pillstrom tongs, you’re probably not wrangling snakes. Lawrence G. Pillstrom, a young medical student at the University of Arkansas for Medical Sciences, invented these tongs in 1953 while researching the effects of snake venom. As invention is borne out of necessity, Pillstrom had to invent the tongs to control his research specimens – the snakes. He patented his design in 1957 and began manufacturing them in Altus, then in Rogers where he established his medical practice. He continued to produce tongs during a move to Fort Smith. When Pillstrom died, his family moved the factory back to Rogers, where Pillstrom tongs are still manufactured today. With 36 species of snakes in Arkansas, Lancaster says, “perhaps it’s not surprising that an Arkansan pioneered the means of capturing snakes safely.”

During the silent film era, Arkansan Broncho Billy Anderson made over 600 movies. His story is included in the Encyclopedia of Arkansas. Credit: Niles Essanay Silent Film Museum


One encyclopedia project dear to Lancaster’s heart is the subject of racial violence and lynching across the state. The editor’s personal research brings him back to this entry again and again. “Given our current collective re-evaluation of our American past, this entry is extremely important for examining such atrocities at the state and very local level.” The encyclopedia maintains a chart of every known lynching in the state, which is updated when research uncovers new cases. The chart runs from 1836 to 1936.

The USS Louisville gunboat on the Red River.
Several gunboats traveled the Mississippi and White Rivers during the Civil War.

Another series of entries that delves deeply into Arkansas history is the Civil War. The encyclopedia contains detailed descriptions of the major battles that occurred in Arkansas, but it also contains entries for many smaller skirmishes. During the sesquicentennial of the Civil War, which ran from 2011 to 2015, Lancaster and his staff decided to provide encyclopedia entries on as many skirmishes as they could, even those that only lasted a few minutes between a half dozen people. “At first, I thought that I would quickly get bored with this, given that these events lacked the same strategic importance as those great big battles, but as the project progressed, I realized that, for most soldiers, this was the war,” Lancaster says.

He highlights the White River Expedition as an example. A small expedition of Union navy soldiers took a steamboat, four gunboats and three rams and traveled down the Mississippi River to the mouth of the White River to conduct reconnaissance of the area. The three-day expedition only turned up one musket, loaded with one ball. Lancaster says, “I like this particular entry because it highlights the tedium of actual warfare. So much tedium that the only casualty for this particular event was a private sleeping near the rail of the boat who fell into the water!”

The Encyclopedia of Arkansas includes the story of the Sultana,
which sank in 1865 and is the United States’ worst maritime disaster.

The Encyclopedia of Arkansas has a long list of subjects waiting to be written. If you’re interested in writing one of these entries, view the list of entries needing authors and then follow the guidelines to contact the staff. You can also suggest an entry if you do not find the topic included in the encyclopedia or list of entries needing authors. You may also become a volunteer reviewer to check entries for accuracy.

The next time you have a question about anything pertaining to the state of Arkansas, from politicians to inventors to unusual events, the Encyclopedia of Arkansas is your best bet for an answer.

When Charles and Shannon Tanner tried the couples’ massage in 2015 at...

Sometimes life takes the strangest turns; we end up doing things we never...