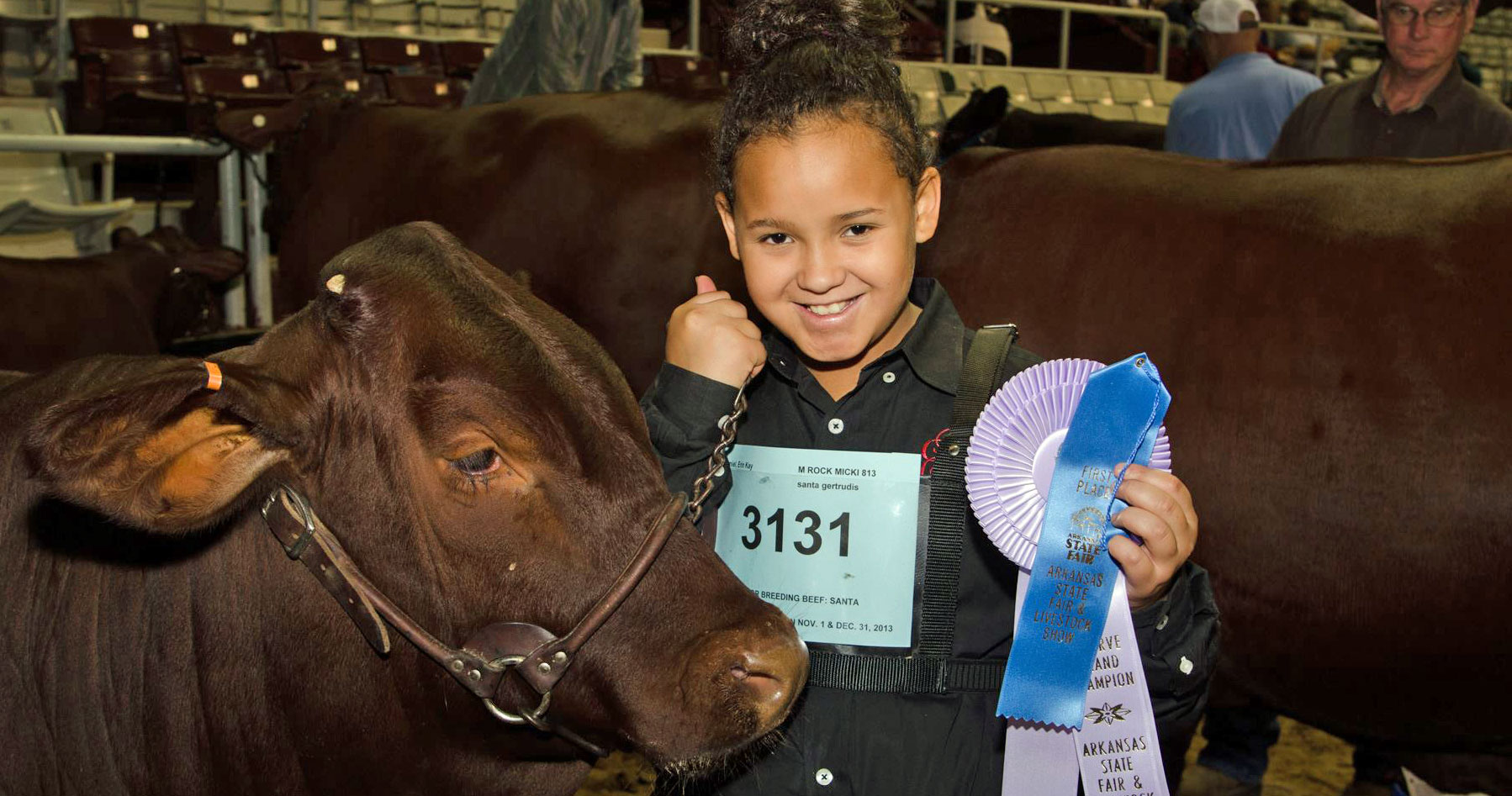 The “Natural State of Fun” is the theme for the 2017 Arkansas State Fair held Oct. 12-22 at the fairgrounds in Little Rock. This year, just for fun, grab a corndog and lemonade then head over to the livestock barns and pay close attention to the agricultural youth showcase. They’ve been working their tails off on their livestock projects for months and you’ll see firsthand the level of attention and care these animals receive from them.

Kids 9-19 can show in the 4-H and FFA show but younger kids, like Huck Plyler, show in the open division. Huck is 7 and in the first grade. He gets up every morning at 6 a.m. to feed and check on his livestock projects he also says he “makes sure they’ve got water.”

In the afternoon, when most kids are vegging in front of electronic devices, Huck and kids like him can be found feeding and working with livestock projects. Huck “works” his calves by leading them around and “setting them up”, which means he practices getting the calves’ feet set in such a way as to make them look their best. Huck also bathes his calves, blows them dry and puts them in the cooler room (an air-conditioned room) so their hair will grow and make grooming them for the show easier.

Huck also shows pigs and works with them by bathing and walking them. You may have figured out, you don’t “lead” a pig you follow and encourage them to go where you want, which is in front of the judge.

Huck says, “showing livestock is really fun. I get to do a lot of stuff with them and I make a lot of friends.” When he grows up he wants to be a college professor and livestock judge traveling around the world judging fairs and livestock shows.

Huck is showing a Charolais heifer named Cinderella at the State Fair this year and offers this advice: “The No. 1 rule of showing cattle is don’t let go.”  His mom Briana explained that a judge tripped and spooked Cinderella at a show, she took off and Huck didn’t let go and finished the job.

Caylee Turner is 14 and in the 8th grade. Every year she chooses a different theme for her livestock projects and then names her animals based off the theme. The 2017 theme was Tom and Jerry, a cartoon from my generation. She has four crossbred lambs: Tom, Jerry, Tike and Barbera and one Boer goat named Spike.

From the time she gets her animals, Caylee gets up every morning at 5 a.m. and feeds and practices with them. During school, she works two lambs in the morning, usually the two that need the least amount of work, and after school, she works with the other animal. “I like to spend more time in the afternoon with the animals that need the most work.”

Caylee washes her lambs every two weeks and rinses their legs three times a week. She says “You don’t wash lambs every day or their wool will get stiff.”

Caylee is no stranger to bad luck. One of her lambs got kidney stones over the summer and she had to give it medicine and hope for the best. “I didn’t know if he would make it,” she says.

Caylee wants to attend Southern Arkansas University and then go on to become a veterinarian.

Lyndon says “we don’t really name our projects, we go by their ear notches (a method of identification) or where we got them from.” Pigs are notoriously curious and prone to lose ear tags, ear notching is a universal, long-standing animal ID method.


This brother-sister team gets up at 5:45 a.m. to feed and bathe their animals. After school, they clean pens, condition (work on the skin and hair coat) and exercise the animals. On Sunday they walk their pigs and send a video to a consultant in California who gives them nutritional advice based on the pigs’ condition in the video. They also weigh each animal every Sunday to ensure they’re growing at the correct rate.

Rylee says, “I love showing because it keeps me busy, and it is how our family likes to spend time together.”

When asked about disappointments, Lyndon described an event at the North American International Livestock Exposition in Louisville, Kentucky, where his pigs got sick and died quickly. Lyndon said, “You just learn to deal with disappointment, there’s always next year.”

There’s a lot of sweat equity involved in getting a successful livestock project ready for the state fair. There aren’t many activities for youth that put them in the position of taking responsibility for properly caring for animals. Showing livestock teaches youth to put the needs of their livestock before their wants – like sleeping in, watching hours of TV or playing video games. Showing teaches them how to deal with disappointment and loss as well as how to communicate effectively. Go check it out for yourself.

This photo and header photo courtesy of Arkansas State Fair. All others contributed by writer, Melissa Beck.
1 Comments

A little about Melissa Beck.

Arkansas Women Bloggers member Melissa Beck lives on a farm in southwest Arkansas with her husband of 25 years. Together they have raised three great kids and innumerable head of cattle. Melissa is a writer, a stocker-cattle producer and enjoys taking pictures of cattle noses.

You’ve probably heard or read something about millennials, and often...

Dannie’s Cafe is in the boondocks on a patched-up black-top county road...

After months of dieting in preparation for our son’s wedding, I tricked...

One response to “Agricultural Youth Showcase at the Arkansas State Fair”