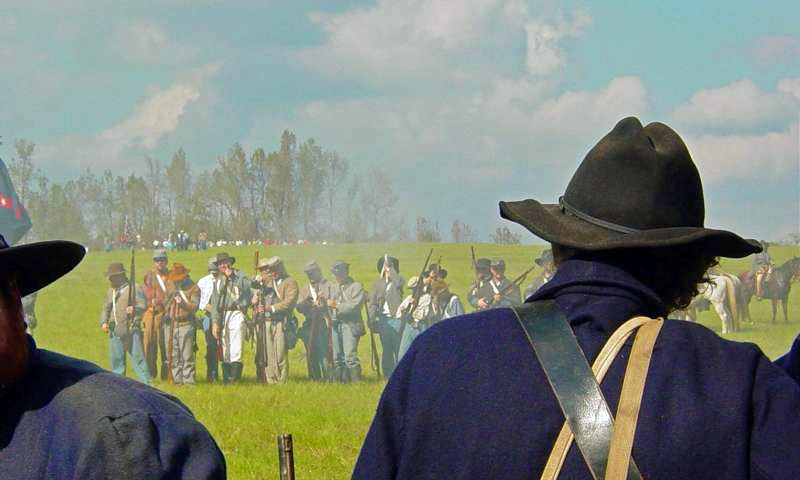 During the American Civil War, many young lasses lost loves to the realities of war. As beaus were buried, hopes of young ladies waiting for the joyful return of their fellows were dashed. But rather than a story of love lost, this is the story of love found and brought to bloom while performing the history of The Civil War in Arkansas.

Kayla Kalkbrenner Hardage was only two years old in 1991 when a flyer in a Jonesboro grocery store enticed her daddy to join up with a group that re-enacted the 7th Arkansas Infantry from the Civil War. Mark and Sally Kalkbrenner had raised their daughter to appreciate history, and this was a way of bringing history to life for her through petticoats and campfires.

Mike and Dot Hardage had also immersed their son in the subject of history. Will Hardage was seven years old when the movie, “Gettysburg” sparked a father-son interest in the Civil War. Both joined the 9th Arkansas Infantry in the Hot Springs area.

Will knew Kayla’s father because Kalkbrenner and he were both leaders of their respective groups. Even though Will and Kayla “knew of each other,” they hadn’t met. Eventually, their paths crossed at the right time, and the couple exchanged phone numbers. Little 2-year-old Kayla and 7-year-old Will had grown up. They married in 2012.

The wedding didn’t include a re-enactment, but a fellow actor who was Kayla’s cousin and a Methodist minister officiated the nuptials. Many friends from their performances through the years attended the wedding.

Will has branched out to participate as a re-enactor in several different eras, from Colonial to World War II. He is active in several organizations as a British Redcoat in the 16th Regiment of Foote with the Early Arkansas Reenactors Association, a Union Officer in the 1st Arkansas Volunteer Infantry Regiment US, and as a WWII era Grenadier Guard in the British army.

“We look at this as living history, a live museum, an educational opportunity to tell the story of the generations before us. Will loves military history, and his passion shows when he is talking to a group of school children or showing an adult the workings of the equipment, or talking battle strategy,” Kayla said of her husband.

Nowadays, Kayla doesn’t find as much time to participate. Henry James was born on July 21, 2017, and made his first appearance at nine months of age the following year in a historical re-enactment during the 154th anniversary of the Battle at Poison Springs. Henry’s little brother, Harry, is expected to make his debut into the family at Christmas later this year.

As part of the performing life, both Will and Kayla have traveled all over the state and country; Kayla said she believes it has shaped who they are as adults. “We both love history and travel and hope to share similar experiences with our kids.”

“A lot of times we explain reenacting to the public like this: this is our hobby, you look at somebody who likes to hunt, and they buy clothes and accessories and a gun and go out for the weekend and camp out and hang out with their friends, and that is what we are doing!“

“We get asked all the time: ‘Did you sleep in that tent? or ‘Is that a real fire?’ and the answer is always yes!’” Kayla added. “We are volunteers, usually helping a community or park explain their local history through live demonstrations.”

This little love story turned big might have its roots in a 19th-century war, but its future is firmly in the 21st century as Kayla and Will pass down an important history to their sons.

Historic Washington State Park will be hosting a Civil War Weekend Saturday and Sunday, Nov. 2 & 3, from 8 a.m. until 5 p.m. You can find more about re-enacting in Arkansas here.

A little about Brenda Studdard Clark.

Brenda Studdard Clark is a native Arkansan who says all of her hopes and dreams can be found right here in Arkansas in her husband, her four children, her job, her Jesus and her Catholic life. She and her husband, Terry, have spent their marriage exploring Arkansas and when not working or traveling, they are at home enjoying life in their old farmhouse on Main Street in a sleepy little south Arkansas town. She is the manager of the Arkansas Welcome Center in El Dorado and says it is a joy to share the Natural State with travelers and to hear their life stories. She is president of the South Central Arkansas Tourism Association and says she feels blessed to be documenting the authentic stories and joys of Arkansas’ South. She is a new blogger/YouTuber at www.mrsbrenda.com.

Like this story? Read more from Brenda Studdard Clark

Standing in the Union County Sports Hall of Fame reminded me of cheering...