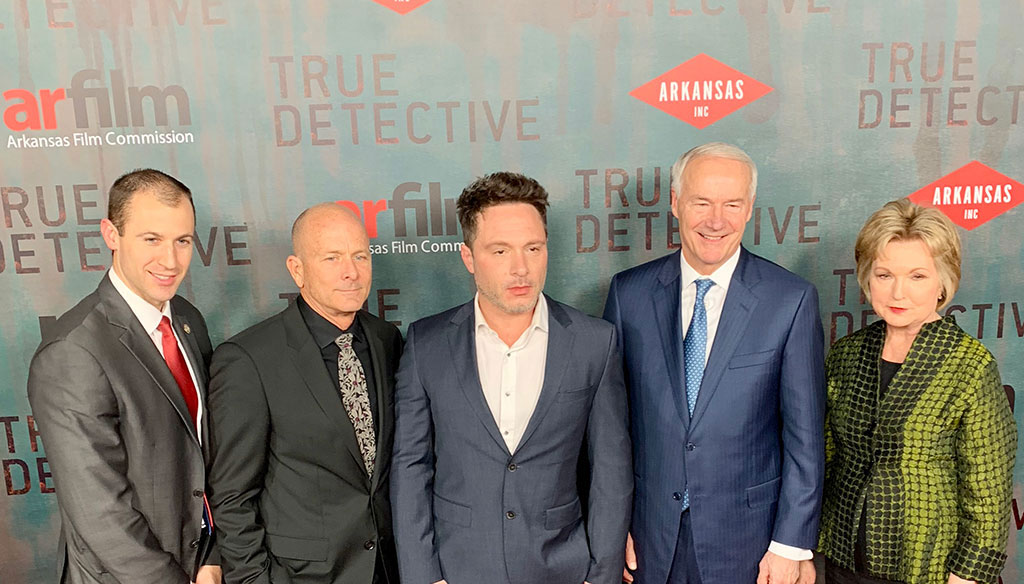 By now you probably know the new season of True Detective is set in Northwest Arkansas. The cast and crew were in town this past summer shooting for the popular HBO series, and the excitement has been building ever since.

A number of locals were involved in the show’s production — led by University of Arkansas alumnus and series creator Nic Pizzolatto — and a sense of regional pride has been swelling ahead of the season premiere on Sunday, Jan. 13 at 8 p.m.

A couple hundred people were treated to an advance screening of the first episode of the new season this past Friday night, hosted by the Arkansas Economic Development Commission and Governor Asa Hutchinson at the Jim & Joyce Faulkner Performing Arts Center on the University of Arkansas campus.

Local actors and crew members were in attendance, as were government dignitaries and several seemingly well-heeled members of local society. HBO executives and Pizzolatto were also on hand to celebrate the culmination of more than 10 months of work.

Pizzollato is listed as creator, writer, director, and executive producer for True Detective. He is the driving force behind the series, and for him it was important to bring the show to Arkansas for Season 3.

“I’ve always found the landscape here really evocative and really beautiful,” he said from the red carpet. “It has such fantastic nature, but at the same time there’s something mysterious about it — with the low mountains, and the fog, and all of the hollers and rocky terrain. It’s dramatic and mysterious and beautiful; and all those things appealed to me when thinking about where we might set this.”

Pizzolatto spent four years in Fayetteville in the early 2000s while earning an MFA in creative writing. He didn’t need to worry about conducting research before starting on the storyline and scripts.

“I know the area pretty well,” he said. “I still have a lot of friends here. It was about writing about the place I already knew.”

When asked if he had any favorite haunts from his days in Fayetteville, Pizzolatto mentioned JR’s Lightbulb Club, George’s Majestic Lounge, and the most hallowed of Dickson Street institutions — Roger’s Rec. He later waxed nostalgic from behind the Faulkner Center podium.

“This place means a lot to me,” Pizzolatto said to the crowd. “I had four of the best years of my life here, and getting to spend nine and a half months back here was wonderful. It felt like home.”

“One of the distinct things about the texture of True Detective is that the locations and the atmosphere become part of the story,” he said after the screening. “And his writing is so deep and so sensitive that the location and where it takes place starts to become an actual character in the story. So, when Nic said he wanted to shoot in Arkansas, we did everything we could to come here and film here. And I think it truly is one of the things that makes this particular season very special.”

Roewe believes Pizzolatto is a unique talent, and well-suited to carry the True Detective franchise.

“I think he’s a true artist,” he said. “Maybe there’s some pain and suffering along the way, but he comes from such an artistic place, and it just resonates in words. There are very few writers that have that kind of emotion in words, and it becomes like this beautiful symphonic music. And so, it inspires everybody and gives them an incredible focus during the creative process. That’s just his gift, and it’s great to be able to realize his gift on the screen like we’ve done here.”

12-year-old Corbin Pitts lives in North Little Rock and already has a number of theater, film, and television credits to his name. He went to an open casting call for True Detective, and two weeks later was cast as 11-year-old Mike Ardoin.

Pitts was on hand for the screening with his sister Grace, who also played a role in True Detective. He said his experience on the show has been unforgettable.

“It feels amazing,” he said. “My other credits are local, and I’ve done a bunch of futures. But they’ve never been something like this, where there’s a big premiere.”

Although production has wrapped on True Detective, Pitts won’t have much time to rest. “I’m flying out to New York on Monday for another film,” said the budding young actor.

“I auditioned three times and finally found my way on set,” said Moore. “The auditioning part was kind of nerve-wracking because this is my first TV role. But being on set was amazing. The food was amazing. And so was the cast and crew.”

Dickson thinks Arkansas viewers will be happy with the final product.