Finding the First Schoolhouse in Arkansas 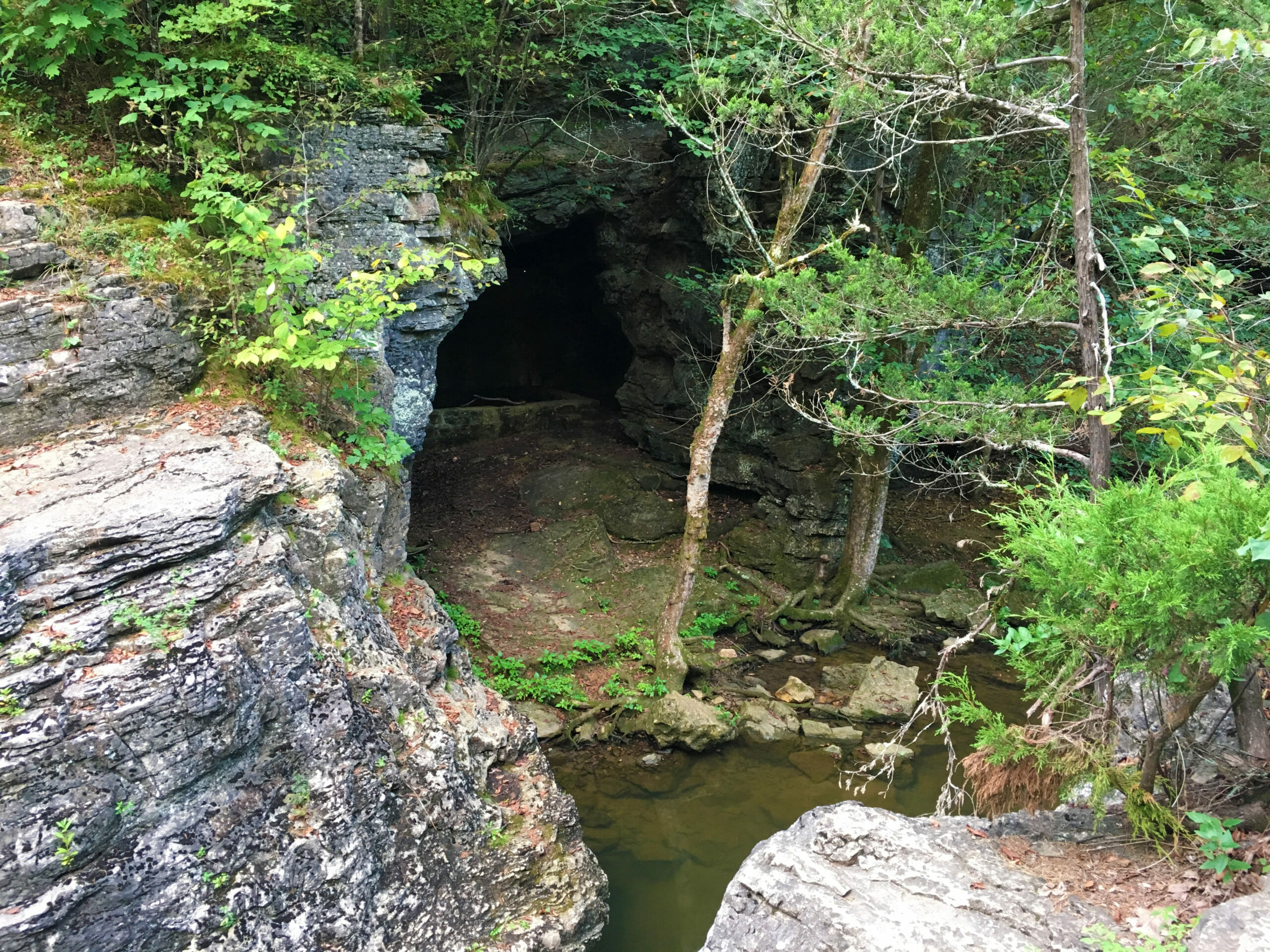 My wife and I recently took a journey to an unexpected venue well off the beaten path that served as Arkansas’s first documented schoolhouse. The scenery that welcomed us might have been the same that surrounded settlers to this part of the state’s northeast area 200 years ago: monstrous rocks, small waterfalls, a wellspring, and tons of crawdads.

Revolutionary War veteran John Janes, the first settler to the region, acquired land in the Janes Creek and Hall Creek area in 1809. Only six years later the first known Arkansas school was established when Caleb Lindsey decided to set up a schoolhouse in a small cave on Hall Creek. The area later became known as Ravenden Springs, Arkansas.

During most of the 1800s, a time when people were in the process of constructing buildings for houses and businesses, the cave served as a permanent school location.

Even as building structures became more common and Arkansas entered statehood in 1836, people continued to meet in the cave. The cold creek nearby provided refreshment in the summer and in winter, the cave stayed warm.

Today, the cave is a natural permanent structure not far from the bustling trade area of the community.

With a road trip, a dose of perseverance, bug spray, a pair of boots, and an ability to take a short hike and climb a few big rocks, you, too can get to the school cave. Take AR Highway 90W to Ravenden, and turn onto Upper Janes Creek Road to the northwest. After immediately crossing over the creek on a bridge, park in the lot of the First Baptist Church on your right.

Walk down to the creek and take note of the spring as a landmark. Head west down the creek (right if you are facing the spring). You won’t see any signs indicating the cave’s location, but you might see the tree limbs that create a canopy over the flowing water. Be prepared to walk through water and tall grass. Look down, and you’ll likely see hundreds of crawdads that zip through where you step.

About the time you cross a waterfall and think you’ve gone the wrong way, keep going. You will find a small, concrete dam holding back a pool of water with a pipe that drains to the other side. Look over the other side of the dam and you will see the deep blue waters of the Devil’s Pool (locals claim it is bottomless). Cross the dam to climb the rocks next to the pool and look across.

You have arrived at Arkansas’s oldest schoolhouse.

Tread carefully over the top of the rocks and into the creek that leads to the cave. On our trip, the concrete wall blocking the entrance to the cave (and to prevent vandalism) was still there. You’ll see a reference to a book and page number on the wall that describes the cave’s history. A couple of years ago, the property owners donated the land to the Arkansas Department of Heritage, and plans are being discussed on how to make the cave more visitor friendly.

Other natural features of the surrounding landscape make it a great spot to visit. Further down the creek from there is a bigger cave, called Elephant Cave, with yet another cave located above it in the side of the bluff. According to local sources, this smaller cave was a ravens’ den and, from 1820 to 1860, a place where ravens nested. The den became the local landmark for the five springs located on the creek and serves as the namesake for Ravenden Springs, Arkansas.

The charm of the small town of Ravenden Springs and the commitment of its residents to the region makes it a fun day trip. After visiting the first schoolhouse in Arkansas, we enjoyed more local venues representing the town’s history of healing spring waters that brought visitors from big cities to the area at the turn of the 20th century. We ate lunch at Grandma’s Country Cookin’ Restaurant and experienced the kindness of the residents. The 113 people who still live here have dedicated their lives to their community with pride that shows through their preservation of historical sites.

If you’d like to know more about the town’s history and school cave, visit the links below.

Learn more about Will Walker.

A little about Will Walker.

Will Walker is a Christian, the husband of Amber Walker, and a personal historian by trade. Will believes that people can draw encouragement and understanding when learning their personal and family history. This is the reason why he and his wife opened Yesteryear, a media conversion and life story business located in Searcy, and why he became the Vice President of the White County Historical Society. Will’s passion for Yesteryear and community volunteering comes from Mark 12:30-31.

Read more stories by Will Walker

2 responses to “Finding the First Schoolhouse in Arkansas”