McClard’s Bar-B-Q: Its All About the Sauce 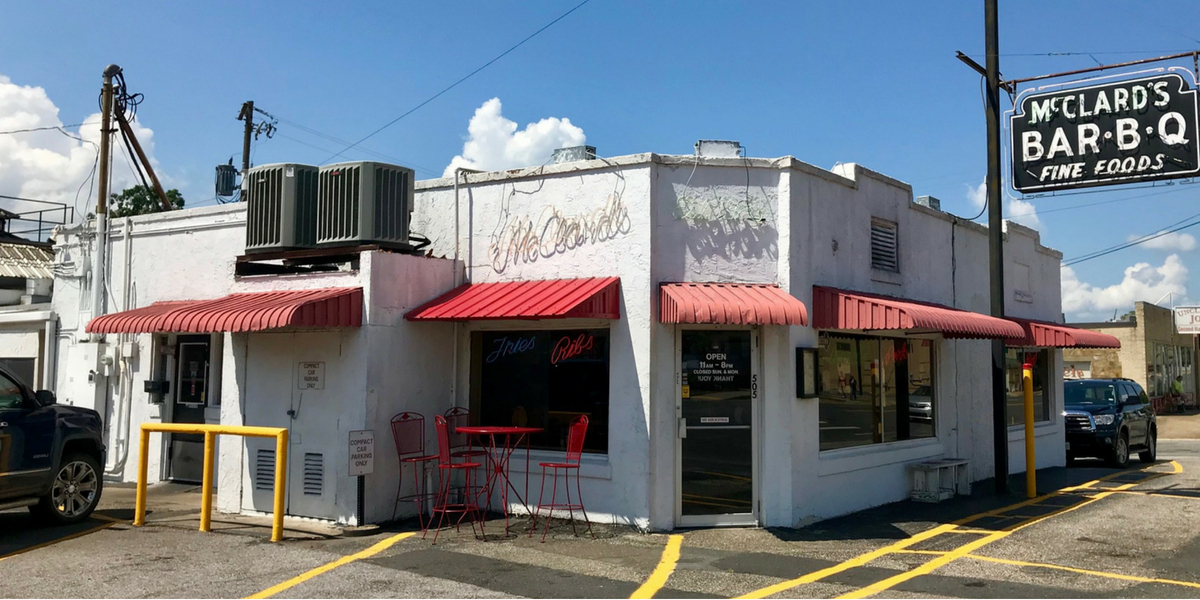 We all bear the name of our father and the generations who have gone before us. But, when your name is on the side of a building and tied to a fourth-generation food destination, the pressure is on to keep up the reputation. That description is the label that Scott McClard wears every day as he stands behind the butcher block cornerstone his great-grandfather set in place in 1942 at McClard’s Bar-B-Q.

During the 1920s, Alex and Gladys McClard owned a tourist court and gas station. In the 20s, it was not as easy to travel from place to place. Well-known hotels were often expensive so lower income travelers, and “everyday” people journeyed from place to place and stayed in areas called tourist courts. The McClard’s stop had an eight-stool breakfast bar in addition to the gas station and lodging stop.

The Secret’s in the Sauce

As the story goes, a traveler stayed at the court for two weeks. When it came time for him to leave, he could not pay his bill. All he had to offer was a great barbecue sauce recipe. Believing something is better than nothing, the senior McClard accepted the recipe and thanked the man. The McClard’s took the sauce recipe and played with the ingredients a little bit. One of the main changes they attempted was cooking the sauce. This process took out the raw flavor from the ingredients and melted them down for a much deeper flavor.

The McClard’s began serving the sauce at their breakfast spot. The sauce was first served on goat as that was the cheapest and easiest protein for them to access. Poultry and beef were at a much higher cost during that time. The McClard’s began serving more barbecue than breakfast, and Alex’s friends encouraged him to throw out the breakfast gig and stick to barbecue. It took off, and soon McClard’s became the reason for people to travel across town for a lunch plate or to come to Hot Springs to stay and eat a meal.

In 1942, the McClard’s moved to their current location on Albert Pike, just blocks away from their original site. In the 50s, they expanded into the full dining room you can eat in today. At the time that expansion doubled seating capacity and kitchen space.

Scott started working in the restaurant two years before his grandfather retired and for 24 months or so, three generations served patrons elbow-to-elbow. Scott’s dad and his Uncle Phillip ran the restaurant for a time, and now Scott and his brother are in charge. Uncle Phillip still comes in at 2:30 a.m. to start making sauces, beans, tamales and slaw for that day’s service. The meat goes on the smoker at 6 a.m., and they try to stay a day ahead on meat production. Scott and his brother John take the helm at 11 a.m. and work in the restaurant along with their incredible team.

The McClard brothers take a lot of pride in keeping the tradition going. For them, it’s a feeling of knowing you get what you came to get. Many people who eat in their restaurant have been doing so daily or weekly for decades. Others come because their father or even their father’s father brought them. They want to sit in a certain booth or eat with counter service just like they remember. The great thing about a good tradition is that you come to know what to expect. But, that’s also the hard part of maintaining a tradition. They want you to get the experience, flavors, sights and sounds that you remember each time you return.

Some people come each week for the same special while others know near anything on the menu is bound to please. The tamale spread and ribs are repeat offenders in the favorites category. If you are looking for a taste of the house, the Butcher Plate is the way to go. You get a little bit of each meat and one incredible side. Let me encourage you to leave room for a piece of carrot cake. It’s pretty close to the best piece you will ever eat.

Hot Springs is well-known for being a former gangster hot spot, so while I was visiting with Scott, I had to ask the question, “Do you have any good Gangster stories?” For some reason, I felt like I needed to whisper when I asked the question. The guys working in the kitchen kind of chuckled after I repeated the question and Scott’s quick response was, “well, I know one thing … Gangsters liked barbecue!” He completed the phrase with a smirk and glimmer in his eye as he steamed an order of ribs and coated them in sauce.

His great-grandfather, Alex, was running the store at the time. The restaurant got a call for a large order for 15-16 people to be delivered to the Penthouse at The Arlington Hotel. They took the order, but he didn’t have time to make the delivery, so his son (Scott’s grandfather) had to complete the order.

Scott said his grandfather relayed the story like a scene from a movie. He knocked on the door, and they asked who it was. He offered his name and that he was there with McClard’s Bar-B-Q. They let him in. The room loomed with low-hanging smoke. Most of the men stood at attention with their hand on a gun ready to pull the trigger. Some had pistols while others stood on guard with Tommy guns. Alvin “Creepy” Karpis was in the room, but he stood across the space with his back to the door. The group gave a $20 tip, and he returned to the restaurant.

McClard said he would never forget the occasion. Maybe it was the $20 tip that would be like receiving $200 or more now, or maybe it was the movie screen moment that he saw. Nonetheless, the sentiment still remains – gangsters like barbecue.

Continuing the Tradition for 90 Years

JC McClard was pivotal in bottling the McClard’s sauce and making it accessible for people to take with them or purchase in a supermarket. Now, Scott is making sure their products can be purchased online and are accessible to another generation so they can have that McClard’s famous flavor with them wherever they are.

Earlier this year, McClard’s was entered into the second induction class of the Arkansas Food Hall of Fame. Special timing with this being the 90th anniversary of the restaurant. While detailed plans are not yet finalized, watch this fall for ways the family intends to celebrate. Follow along on Facebook or Instagram (@mcclardsbbq) or use #McClardsBBQ to share your own stories.

For the McClard brothers of 2018, taking care of the family business is not about reinventing the wheel, it’s about making sure is still rolls. McClard’s is an Arkansas tradition; there’s just no need to mess with it!

If you spend any time outdoors in Arkansas during summer, you desire one...

My husband and I have had the chance to travel different parts of the...

4 responses to “McClard’s Bar-B-Q: Its All About the Sauce”