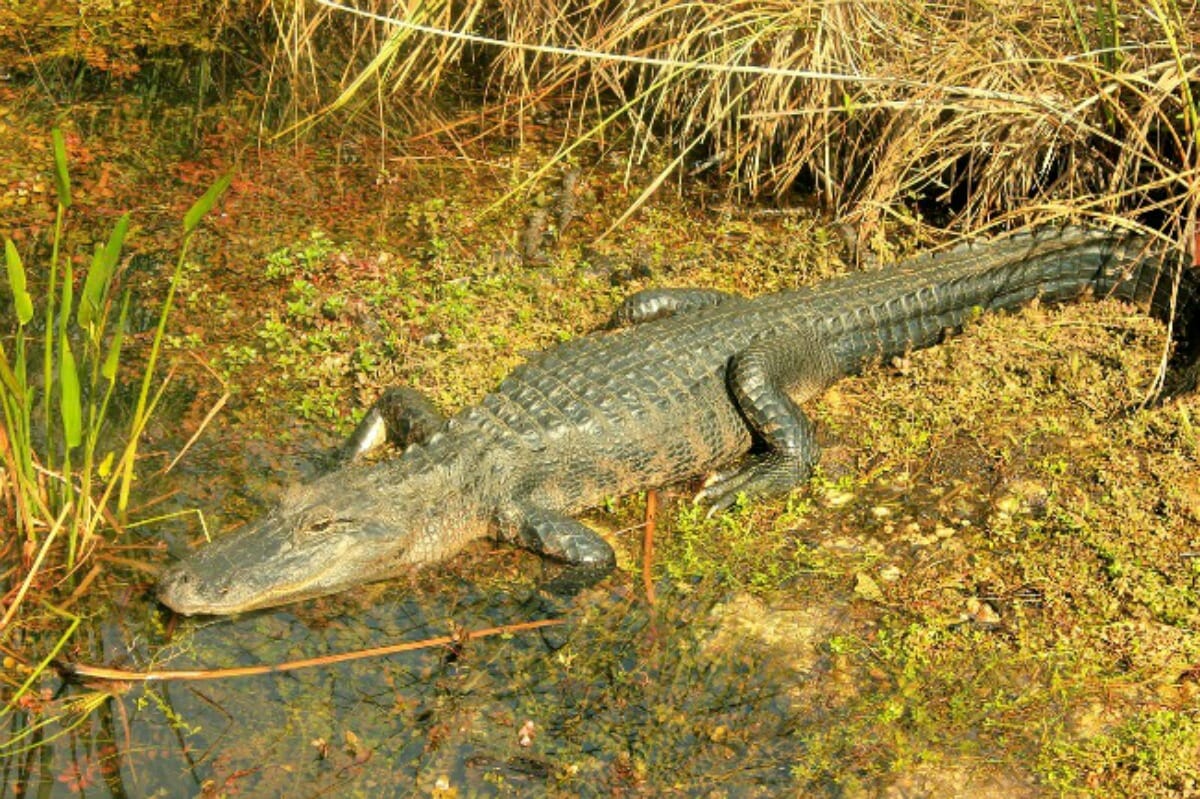 From bears and bobcats to feral pigs and swamp rabbits, wildlife in Arkansas is part of the natural beauty of our state. However, one of the largest and most startling animals in Arkansas is the alligator.

Alligators are native to Arkansas. Prior to the 1800s, alligators roamed the southeast part of the United States, ranging from Florida and Georgia up to the Carolinas and across the south to Louisiana, parts of Texas and yes, Arkansas, too. It’s estimated that up to 3 million American alligators lived in the swamps, rivers and lakes of the southeast.

Once more settlers moved into the area that changed. Wetlands were drained to create more land for communities and farming, and alligator territory near rivers and lakes became more heavily populated. The number of alligators dropped drastically as the 20th century progressed.

In 1973, the American alligator became an endangered species. Arkansas and a few other southern states had already moved toward protecting the alligator in the 1960s. Now it was time to bring the native population back in Arkansas. The Arkansas Game and Fish Commission began relocating young alligators from Louisiana in 1972 and continued through 1984, bringing over 2800 gators into the state to repopulate. Not only did alligators recover in Arkansas, but also in other southern states, due to endangered species protection and repopulation efforts. Today, the American alligator is no longer considered an endangered species, but they still enjoy protected status.

You might be asking yourself why it was important to bring the alligator population back to the state. After all, aren’t alligators dangerous predators? The truth is, according to the Arkansas Game and Fish Commission, Arkansas hasn’t seen an unprovoked alligator attack or human death from an alligator in at least 20 years. The word unprovoked is key. Alligators can swim up to 20 miles per hour and on land, they can run up to 11 miles per hour. Though they’re quick, they don’t like chasing prey over long distances. While being attacked by an alligator in Arkansas is highly unlikely, if you see one, it’s wise to give it a wide berth.

When the AGFC reintroduced alligators to Arkansas, many private landowners requested the animals be released on their land. Alligators play an important role in the ecosystem here. They are opportunistic predators. They’ll eat fish, turtles, frogs and waterfowl, but they can also attack larger prey, like raccoons, possums and deer, given the opportunity. They create alligator holes, deep holes near their watery habitats. During dry periods, these holes retain water, allowing other species to benefit. Alligators don’t eat from October to March, though you can find them basking in the sun on warmer days throughout this time of year.

So, are you likely to stumble upon an alligator while out in the woods or on the river? That depends on where you are. Alligator territory covers the southern half of the state, and also stretches north into the Delta, but they keep to themselves in swampy areas near rivers, lakes and streams. The northern part of the state is simply too cool for alligators to survive. Two of the most likely places to see alligators in larger numbers are Arkansas Post National Memorial or Millwood State Park.

Arkansas Post’s wetland marshes, bayous and low terrain offer prime habitat for alligators. The national site is located near Dumas in Desha County. Alligators can also be found in the marshes of Millwood State Park, located near Ashdown. If you happen to be fishing or hiking and come across an alligator, leave the animal alone.

You might also spot an alligator across other portions of the state, including the lower Arkansas River area, the Ouachita River, the Bayou Bartholomew area, which includes Lake Chicot State Park, and the Red River area.

Alligator hunting is allowed each fall for a limited time, but permits must be acquired from the Arkansas Game and Fish Commission. Interested hunters can apply for permits in June and hunt in September in their allocated area.

The next time you spot a bumpy log in the water on one of Arkansas’s lakes or rivers, look again. It might just be an alligator.

5 responses to “Alligators in Arkansas”