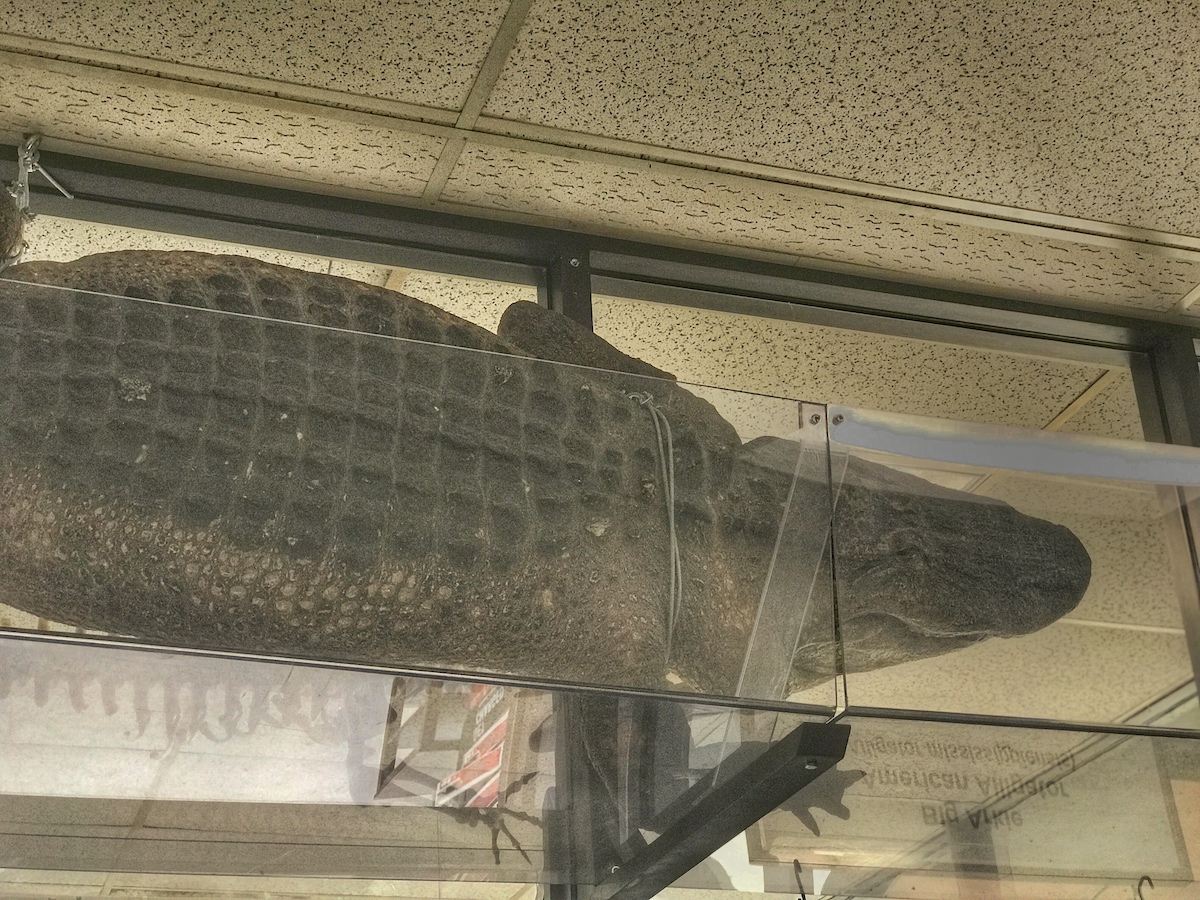 In 1952, a young boy spotted a 13-foot alligator in a flooded field outside of Hope, Arkansas. Displaced as the result of flooding along the Red River and Yellow Creek, the alligator known as “Big Arkie” spent the next two decades as a reptile resident in the state and caught the hearts of an entire community.

In the 1950s, as wetlands were drained to make way for farmland, and as more communities were built alongside lakes and rivers, the alligator population in Arkansas began to dwindle. When the boy found the alligator, an animal native to the state, it was cause for excitement. Members of a local hunting club were called out to investigate.

Later that evening, the alligator was wrapped in a cable and transported by tractor to the Hope kiddie pool where it spent the night covered in chicken wire. The following morning, it was transported to the Little Rock Zoo. Records in the 1950s weren’t adequate to confirm details, or if any money exchanged hands; whether due to fear or curiosity, it remains unclear why the hunters chose to capture the alligator as well as how and why the animal ended up in the zoo. Within 24 hours of its capture, the alligator was transported. It took seven men nearly an hour to move it from the delivery truck to the holding area.

Eventually, the zoo’s newest reptile became the main attraction. It was here that Big Arkie got his name when reports surfaced that the enormous new alligator weighed over 500 pounds, making him the largest alligator in captivity. On the opening day of his exhibit, more than 3,000 people visited the zoo. For the next 18 years, Big Arkie became a childhood symbol for many Arkansans that grew up in the ‘50s and ‘60s.

Like many captive animals, Big Arkie faced struggles. In the early 1960s, he developed a fungal infection around his mouth likely resulting from vitamin D deficiency, later speculated by a zoology professor to have been caused by stress. From the time Big Arkie was captured until his death, he was confined to a small enclosure and never again had contact with another alligator.

In May 1970, the Arkansas Gazette (now the Arkansas Democrat-Gazette) reported that Big Arkie was refusing food and that his health was deteriorating. Despite the zookeeper’s efforts, Big Arkie died July 30, 1970. He had reportedly lost over 150 pounds. A memorial fund allowed the saddened community to donate money for taxidermy so Big Arkie could remain at the zoo. Fans raised nearly $850. The famous Arkansas alligator was stuffed and mounted and even placed outside on warm days to help speed the drying process, a sight that became an attraction of its own. When the process was complete, Big Arkie was displayed in the Reptile House at the zoo for many years. Unfortunately, conditions in the reptile house were not conducive to keeping a taxidermy animal, and his stuffed body began to deteriorate.

For the next 20 years, it was difficult to find Big Arkie a permanent home. He spent several years in the lobby of the Arkansas Game and Fish Commission building and eventually found a long-term home at the Arkansas State University Museum in Jonesboro.

When Dr. Stan Trauth, emeritus professor of zoology at the university, found out the museum’s plans to discard the reptile in the late 1980s, he requested that the museum let him have the specimen. Although Dr. Trauth didn’t have a suitable storage place, he felt the students in the science department would enjoy seeing the animal. For many years, Big Arkie lived in the exposed pipes in the ceiling of the professor’s office.

In 2014, Dr. Trauth placed Big Arkie into the university’s herpetology collection. The alligator was eventually put on permanent display in the lobby of the Laboratory Sciences East building where he remains today.

Big Arkie’s age was never accurately determined. Alligators can live 60 to 70 years but typically gain the bulk of their size by about age 15. Dr. Trauth stated that under normal circumstances, Big Arkie would have continued to grow in both length and weight. Sadly, the stress of confinement prevented him from growing during the last 18 years of his life.

Children and adults loved Big Arkie, but despite his size and imposing demeanor, zoo life was hard on him. Had he been able to live in the field, he might be nearing the end of his life today, likely even much bigger than the day he was found.

Although Big Arkie died before I was born, I recently visited him at Arkansas State University. He’s an impressive animal, and it’s not surprising that he was such a successful attraction at the Little Rock Zoo. Many who visited the exhibit as children still fondly recall him; Big Arkie may be gone but may his memory live on for generations to come.