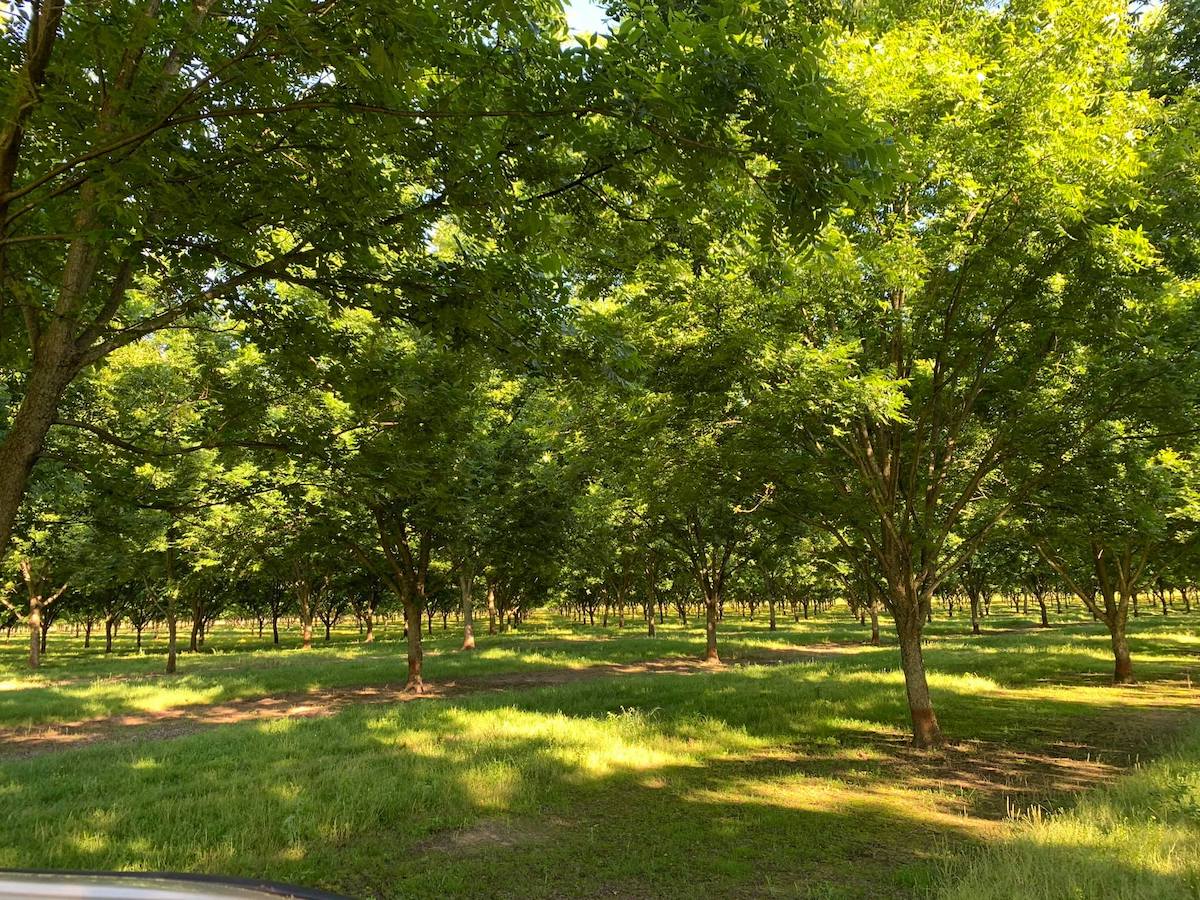 If you are nuts about pecans, you are not alone. Pecans are the only Indigenous tree nut in North America and are native to Arkansas. They have long been favored because they taste great and are easier to shell than other common tree nut species. They are grown in backyards, orchards and can be found in forests throughout Arkansas.

Evidence shows that Native Americans collected pecans before the 1800s. In the mid-1800s, native groves were thinned by settlers to provide areas for cattle grazing and commercial cultivation began around the same time.

In 2009, the Eighty-seventh Arkansas General Assembly passed a bill that designated the pecan as the official nut of Arkansas. The trees prefer sandy, alluvial soil found along river beds like the Arkansas, St. Francis, Red, and Mississippi Rivers. They can be found throughout the central, eastern and southern regions of Arkansas. Many commercial pecan groves were cultivated from native groves that developed along the rivers well over a hundred years ago.

There are more than 500 varieties of pecans, although most farms in Arkansas only cultivate a handful of varieties. Although similar in taste, different varieties are ready at different times, ensuring a steady fresh harvest throughout the season. They are usually ready for harvest in late October through November. Each year, more than 2.5 million pounds are commercially harvested in Arkansas.

Pecans are full of protein, fiber and healthy fats, making them a great choice for snacking. The healthy fat found in these nuts also means that they aren’t shelf-stable for long without turning rancid. Store them in airtight containers in the fridge or freezer for up to two years.

Pecans taste great and can be used in both sweet and savory applications and a wide variety of recipes. Some popular recipes include pecan pie, maple pecan fudge and pecan-crusted catfish.

My favorite recipe is the simple Oven Roasted Maple Pecans which marry my childhood in Vermont with my adult life in Arkansas in a tasty culinary creation. I add them to salads featuring Arkansas strawberries and creamy goat cheese from White River Creamery. They add crunch to pancakes and the salty sweetness is the perfect companion to a bowl of vanilla ice cream. Since my family and I can often be found hiking trails across Arkansas, we always keep baggies of them in our hiking packs, so we have a protein-filled snack for the trail.

Where To Buy Local

Pecans are a hot commodity, especially during the holiday season. Choosing to purchase from a local grower is a great way to support a local farm family and community.

Clark’s Pecan Grove has over 200 trees on 30 acres of land outside of Mayflower. Check their website for the latest availability.

The Foshee family began growing pecans in 1984 on just 12 acres and now have more than 2,300 trees of over seven varieties growing on nearly 100 acres. Complete information can be found on their website or Facebook page. Paul & Carolin Foshee began the farm and share the business with their children who each manage their portion of the crop. Paul and Carolin, along with their daughter and son-in-law Shelia and David Whittenburg operate at the Foshee Family Farm. The Foshee Family is both the Conway County and the Western District of Arkansas Farm Family of the Year for 2021.

Phyllis and Jerry Burgener are the daughter and son-in-law of the Foshees. This family grows three types of pecans on their farm along the Arkansas River near Hot Springs. You can purchase on their farm or online once they open for the season in late October or early November. You can follow them on Facebook for their latest harvest dates and availability.

Randy and Tammy Foshee (son and daughter-in-law of Paul and Caroline) have a mobile business that operates in the Little Rock area. You can find the Pecan Guy at farmers’ markets throughout Little Rock. Contact them via phone (501-940-0294) or email (pecanwork@gmail.com) to purchase. They also ship.

This up-and-coming family farm is still in its early stages and not yet open to the public. The family planted over 6,000 trees in 2019/2020 and continues to add to their orchard. It will be a few years before their nuts are ready to harvest but keep a close eye as this orchard will be one of the largest in central Arkansas. Follow them on Facebook to watch their trees grow!

Maus Pecans established in 2020, is a family-owned and operated pecan orchard, processor, and retailer based out of Morrilton, Arkansas. Their products include shelled pecan halves, in-shell, and farm cracked (some shells still included.) Come out to the farm or call or email (Mauspecans@gmail.com) to place an order.

The York Pecan Co. has been producing pecans for the retail market since 1999. A large variety of pecan products are available year-round through their website, or you can visit them from 8-5 pm during the week. You can also follow York Pecan Co. on Facebook to learn about all of their latest products.

For more than 43 years, the Davis Family has produced high-quality pecans and candied pecan products in partnership with local growers. A 10,000 square foot cleaning plant opened in 2017 to help quickly and efficiently clean the nuts. They offer products cleaned, processed, and ready for consumption. Connect with them via Facebook and place your orders on the Davis Pecans website.

Joe and Jan Smith purchased a 42-acre pecan farm in 1998. Over the years, they have grown to more than 200 acres and grow more than 2,000 trees of 15 varieties of pecans. They added a cracking and shelling machine, a cleaning plant and a sizer to ensure that they could offer their customers high-quality nuts at affordable prices. You can visit them online or check out their farm in person during the harvest season.