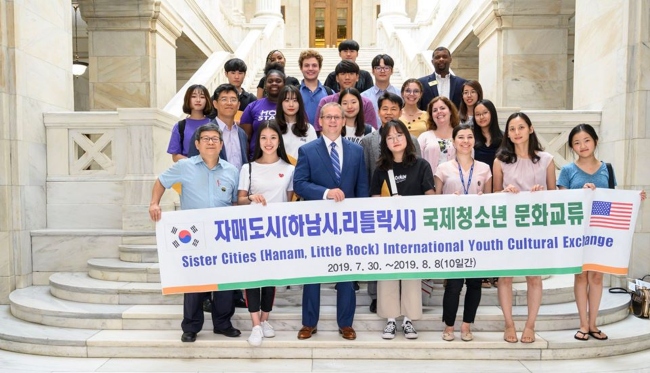 In 1956, President Dwight D. Eisenhower saw an opportunity to create economic ties and cultural exchange around the globe by creating a network of sister cities. A few cities had already established their own relationships, most famously Toledo, Ohio, and Toledo, Spain, which signed a “twinning” document in 1931. Eisenhower wanted to see cities in the United States form relationships abroad to promote citizen diplomacy and peace around the world. In the first few years, the movement grew into 40 affiliations between cities in the U.S. and abroad. By 1967, over 350 communities had declared sister city relationships with cities in 57 countries around the world. That year, the organization also transitioned from a government-led effort to a non-profit organization named Sister Cities International.

A signpost at the Big Dam Bridge points the way to Little Rock’s sister cities.

The mission of Sister Cities International is “to promote peace through mutual respect, understanding and cooperation – one individual, one community at a time.” While Sister Cities International helps facilitate relationships, it is up to individual communities to seek out and form relationships with interested communities overseas. They are formed when the highest elected official of each town formally signs an agreement to the partnership. Once cities are paired together, they can begin to benefit in a variety of ways, including trade, business, and educational and cultural exchanges. Sister Cities International offers its members the opportunity to attend an international conference each year. They also hold an awards ceremony to recognize outstanding projects and achievements between cities. Young citizen diplomats are also recognized through a young authors and artists showcase.

Today, 471 communities from 46 states participate in the international program, forming over 1,800 partnerships. Little Rock, Arkansas, is one of the participating communities, with five sister cities and one friendship city. Little Rock launched its sister cities initiative by partnering with Kaohsiung, Taiwan, on April 19, 1983. Since then, the city has established partnerships with Hanam City, Korea in 1992, Changchun, China in 1994, and Caxias do Sul, Brazil, in 2017. Newcastle-Upon-Tyne, England, became a friendship city in 1999. Friendship city status is often given at the beginning of a relationship when cities are exploring the possibility of becoming sister cities. Newcastle-Upon-Tyne became a sister city to Little Rock in 2016. Jining, China became a friendship city in 2016.

Denver Peacock became interested in joining the Sister Cities Commission through the encouragement of friends who knew of the commission and Peacock’s passion for travel. He has traveled to 95 countries and all fifty states. He has nearly 25 years of experience in public affairs and relations, including six at his own firm, The Peacock Group. Anyone living in Little Rock can apply for the board. Peacock applied and was accepted. Each sister city has two board members, creating a twelve-member board with an additional commissioner as chairman. Peacock and commissioner Robert Zeiler worked closely with officials from Caxias do Sul, Brazil, to help bring the city into full sister city status with Little Rock. Now Peacock has been appointed for a new five-year term and is currently serving as chairman of the board.

The commissioners on the board are all volunteers, and being involved with the commission is definitely a commitment. The members host officials from sister cities on visits around Little Rock, showcasing Little Rock’s museums, historic sites and parks, including Central High School and the Clinton Center. They have meetings with the mayor or other city officials. Sometimes the visiting officials have specific needs. One group was interested in touring a water facility. A soccer team visited from Newcastle-Upon-Tyne and played games against Hendrix and Little Rock teams. Some guests from China came to Little Rock to run in the Little Rock marathon. Usually, a visit also includes a formal reception or presentation. Schedules are packed and keep commissioners hopping, but Peacock takes it in stride. “We want people to feel very welcome. We’re trying to present ourselves as a model city for the world.”

Of course, international travel is both a necessity and a benefit for commissioners. Peacock has traveled to Brazil several times as part of his involvement with the board. Little Rock’s sister cities host visitors from Little Rock in much the same way. In fact, cultural and educational exchanges are one of the great opportunities these relationships present. The Sister Cities Commission partners with the Little Rock Mayor’s Youth Council to sponsor the Youth Leadership Program. High school students from Little Rock can participate in the program and learn about how the city government functions, including the justice system and educational system, as well as business and economic groups and the arts. At the end of the program, students visit one of Little Rock’s sister cities on an exchange trip, providing them the chance to see how a foreign city operates as well.

When Little Rock Mayor Frank Scott, Jr. came on board in 2019, he asked the Sister Cities Commission to push economic development opportunities with existing sister cities while pursuing new relationships for future ones. The commission is actively looking to establish a sister city in Mexico. “We have a consul general based here,” Peacock states, “and it’s important to them to create strong ties.” Little Rock once had sister cities in both Italy and Mexico and are exploring the possibilities of reconnecting those relationships.

When asked why he wants to continue involvement with the Little Rock Sister Cities Commission, Peacock says, “It’s important to have people in the city thinking about promoting international relationships and diplomacy around the globe and how we can work together to shine a light on Arkansas.”

Photos are courtesy of Little Rock Sister Cities Commission and used with permission.