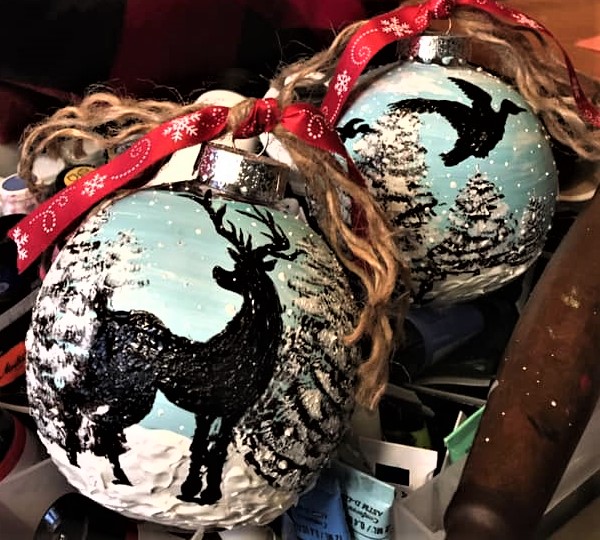 Out of work and in need of a total hip replacement, Kim Berry thought that she may not work again. Having learned to paint as a little girl, Berry has always showered her friends and family with handmade or hand-painted works of art. Recently, her work has attracted the attention of many patrons on social media who were willing to pay for a one-of-a-kind creation from her home studio in Benton, Arkansas.

One of them was Lost Pizza Co. on Highway 5. After doing some work for a family friend who works at Lost Pizza Co.’s Benton location, Berry was recommended to their management. After getting in touch with them, Berry painted several items for their restaurant décor including two wooden benches and their kitchen doors, pictures of which were posted on their Facebook page. Preston Lott, co-owner of Lost Pizza Co., saw those pictures and contacted Berry about doing some work for him.

Lott sent some items to Berry’s home to paint. One of those items was a decorative fish, which Berry painted and dressed like Elvis Presley, complete with a custom made jacket, wig, skin and teeth. Dubbed “Elfish,” Lott loved it so much that he hung that smiling bass at the franchise office in Santa Rosa Beach, Florida.

Thanks in part to the holiday season, her hand-painted glass Christmas ornaments have become very popular. From early in the morning until the evening she goes to her studio and meticulously paints each new design surrounded by past creations. Starting with glass picture frames and paints, Berry began painting detailed snow-covered landscapes complete with highly detailed Christmas trees and smoke billowing out from the chimney of a small house. Painting on glass ornaments came next which proved to be more difficult because of the round surfaces but with the help of her phone, some paints, and a set of tiny brushes, she can now paint anything on those glass ornaments.

While some are clearly Christmas themed, like her snowman ornament, others are more custom creations like her cupcake ornaments with little “candies” on them. For Berry, it’s about more than making ornaments. “I couldn’t let a gift like this go to waste for sure, especially when I feel it’s like a second chance, a new beginning for me, anyways. I honestly owe this to prayers, believing and good old hard work. I like the joy it brings. I love helping people share memories and special moments. It is very rewarding.” – Kim Berry.

Berry’s most recent commission was for the mother of a Bryant police officer. She spent hours recreating his badge on a glass Christmas tree ornament using only a photograph on her phone as a reference. Berry says that orders are pouring in, so she’ll be working after new year’s.

A little about Cody Berry.

Cody Berry is a freelance writer and Historian from Benton, Arkansas. Cody holds an MA in Public History from the University of Arkansas at Little Rock and is a frequent contributor to the online Encyclopedia of Arkansas History and Culture.

One response to “Kim Berry: An Artist’s Gift of Holiday Beauty”