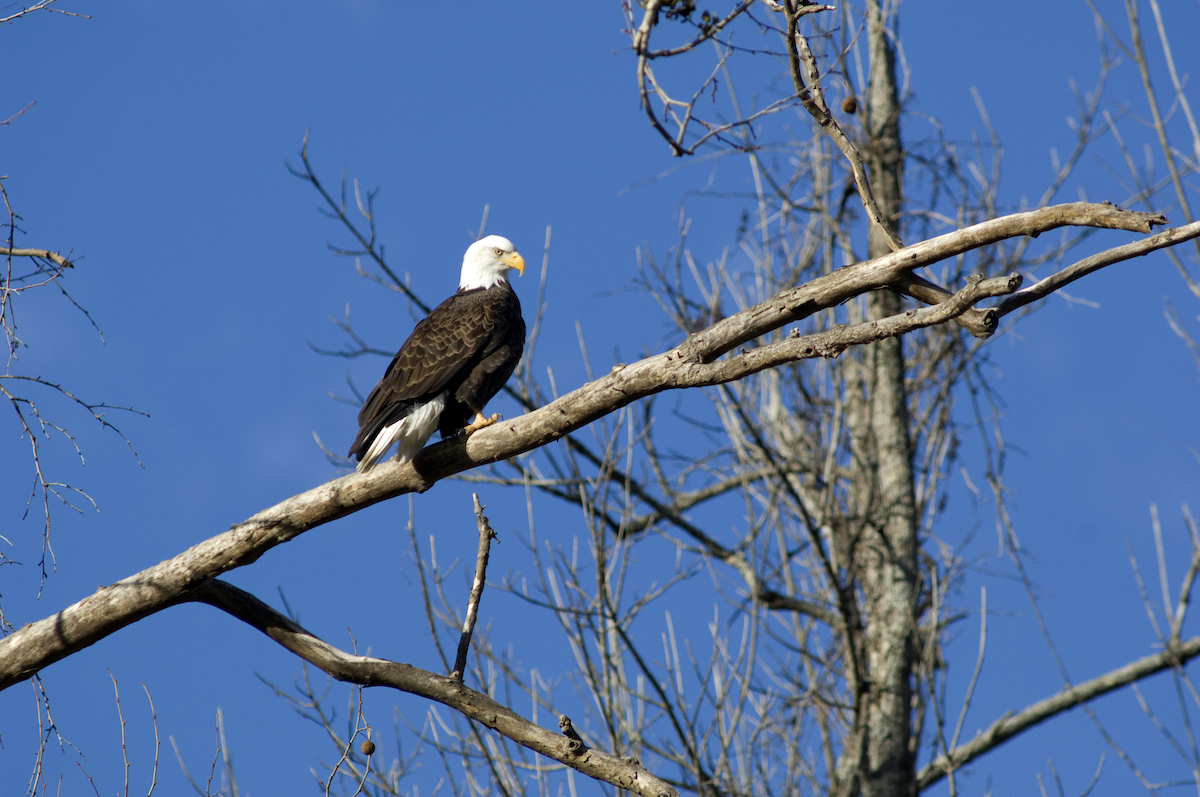 Late winter into early spring is prime time to spot eagles in Arkansas. Eagle-watch cruises around the state quickly fill up with people hoping to catch a glimpse of the majestic American symbol. I never fail to get teary-eyed every time I see one of these magnificent birds, but the first time I saw a video of a Bald Eagle suffering from the effects of lead poisoning I was deeply disturbed. Lead poisoning in birds is often caused by humans, including people like me who love and respect nature, without even realizing we are doing something potentially harmful.

From hiking and camping to fishing and hunting, Arkansas’s forests and lakes provide a veritable gymnasium for me (and you) to enjoy hours of fun, entertainment, exercise. The outdoor areas allow us to maybe even bring home a meal of game or fish. Many who participate in these activities practice “Leave No Trace” and take measures to make sure they aren’t doing anything that may harm wildlife.

Yet without even realizing it, hunters and fishers across the state may be unintentionally harming wild birds by using lead ammunition and tackle.

All wild birds are at risk for lead poisoning, though it seems to be more prevalent in larger birds and waterfowl than in songbirds, mainly due to their eating habits. Most often birds ingest lead when eating contaminated fish or prey. This could be a squirrel or rabbit with a lead pellet or a fish that has ingested a lead sinker weight.

As seen in videos like this one, the effects of lead poisoning are disturbing. Rodney Paul of Raptor Rehab of Central Arkansas says it is absolutely devastating to watch. The number of lead poising cases that Raptor Rehab sees varies from year to year but Paul says even one case is too many.

Signs of Lead Poisoning in Birds

This eagle is being treated for a wing injury. It was not suffering from lead poisoning. Photo courtesy of Raptor Rehab of Central Arkansas.

How is lead poisoning treated?

Paul has had enough experience with lead poisoning to recognize the signs upon the intake of a bird. Treatment, which consists of calcium injections, begins immediately, often before blood results can come back. The longer a bird goes without treatment, the less likely the bird will survive. When injected intramuscularly the lead bonds to the calcium injection and passes through the bird when it defecates. The treatment for lead poisoning can be lengthy and is rarely successful. Death often comes quickly. In other cases, the bird will need to be euthanized.

How Can Lead Poisoning be Prevented

People often imagine a bald eagle swooping down over a lake and grabbing a fish from the pristine waters. In reality, eagles are scavengers. They will seek out the easiest meal and the easiest meal is already dead.

In Arkansas, it is legal to shoot feral hogs and leave them. Hunters may not be able to track and recover an injured animal. Gut piles may be left in the woods and raptors and other animals feed on what is left behind, possibly ingesting lead ammunition. Waterfowl is also at risk from lead tackle that may be left behind by fishers. According to Paul who is pro-hunting and fishing there are non-lead alternatives that are safer for wild birds.

Hunters can choose copper bullets which have been found to be just as effective, if not superior, to lead ammunition. Lead ammunition is often considered more “traditional” and the price point of lead ammo is slightly less than copper, but making the switch can be a beneficial change for the Arkansas environment and the wildlife that inhabit it.

Lead tackle and jigs have always been popular among fishers. Unfortunately, due to line breakage, many lead pieces are left in the water and are irretrievable by anglers. Waterfowl feeding on fish, frogs and aquatic vegetation are most at risk. Steel and Bismuth/Tin sinkers and jigs are considered to be environmentally friendly and are widely available. Their price points are slightly higher but the average angler spends less than $3.00 per year on sinkers, so the cost of the change could be minor.

Because it is believed that lead ammunition and tackle are the primary sources of high-grade lead poisoning in birds, it is important for hunters and fishers to make a change. Here are some suggestions to get started:

Cover photo courtesy of Arkansas Department of Parks and Tourism.